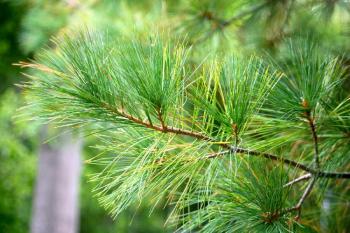 "I am Dekanawidah and with the Five Nations' Confederate chiefs I plant the Tree of Great Peace."

With these words begins Gayanerekowa, the Great Law of Peace, also called the Great Law or the Great Peace, under which five nations—Mohawk, Oneida, Onondaga, Cayuga and Seneca—ended their years of warring to form the Iroquois Confederacy.

The speaker of these words was called the Peacemaker, his name deemed so sacred it could only be spoken at certain times.

Accounts of the life of the Peacemaker show he was destined for great things, even before his birth.

His mother was of the Wendat Nation, but she and her mother fled from their home during an attack by a neighboring nation. Once they were away to safety, the older woman realized her daughter was pregnant. She was puzzled by this turn of events, as her daughter had never been with a man, but all was explained to her in a dream.

In her dream, a spirit told her the child had been chosen by the Creator to bring a message of peace to his people.

The message he had to share was clear. Even as a young boy he would speak of kindness, understanding, love and respect.

His people heard his words and his call to return to the ways of the Creator, and they took those words to heart. The Peacemaker then turned his attention to the surrounding nations, who also needed to hear and heed his words. He carved a canoe out of white stone, and his mother and grandmother watched in amazement as he floated down the river in it.

The Peacemaker brought his message first to the Mohawk and then to the Oneida, where his words of peace were accepted. Two Oneida men were chosen to bring his message to the Cayuga and the Seneca.

The message was accepted by the Cayuga, but the Seneca leaders were afraid the other nations would attack them if they listened to the words of peace. When he learned of the Seneca reluctance, the Peacemaker travelled to Seneca territory himself. There he found two warriors who had accepted his message, and he appointed them as representatives of their nation.

The two men travelled with him to a special council meeting on Onondaga Lake where representatives from the other nations had already begun to gather.

The representatives then travelled with the Peacemaker to Onondaga territory to confront the great medicine person who lived there and who inspired fear among all who knew of him. The Peacemaker convinced him to accept his message and he became the council's fire keeper and keeper of the wampum.

With 11 chiefs in place in the grand council, The Peacemaker created the laws of the Great Peace and presented them to the council.

Once the laws were in place, the Peacemaker again appealed to the Seneca, who realized that this was a true peace they were being offered and joined the council.

With all five nations now represented, the League of the Iroquois Confederacy had come to be. Eventually 50 chiefs would sit as members of the grand council, which would meet at Onondaga at the centre of the territory of the five nations.

Under the tree all the weapons of war would be buried, never again to be used by the nations of the confederacy to do battle against each other. On top of the tree sat an eagle, which would act as a guardian to the Great Peace, watching for anything that might be a threat.

The Peacemaker told the chiefs that the nations were now a family, and would live in harmony as long as the Great Peace was protected. To further cement this unity and harmony, the Peacemaker created a new clan system, with nine clans—Turtle, Bear, Wolf, Heron, Hawk, Snipe, Beaver, Deer and Eel—that would be found across the confederacy. In this way, the Peacemaker reasoned, members of the same clan would develop ties, regardless of which nation they were from.

He told them they now lived as a family in one longhouse, with the sky as a roof and the earth for a floor. The Mohawk would be the keepers of the Eastern Door, the Seneca keepers of the Western Door, and the Onondaga in the centre, keepers of the council fire. It was then the five nations took the name Hodenosaunee, people of the longhouse.

Then, his work for the Creator completed, the Peacemaker went away.

Under the Great Law, the five nations that made up the confederacy were divided into two groups. One group, the elder brothers, was comprised of the leaders of the Mohawk, Onondaga and Seneca. The other group, the younger brothers, included the chiefs of the Oneida and Cayuga. Despite the designation, neither group held sway at the council fire—unanimous support was required in all decisions.

Once they reached an agreement, their decision would be reported to the Onondaga council leader. If he agreed, the decision would be accepted. If not, the process would begin again. If no agreement could be reached, the issue would be set aside and the council fire covered with ashes.

When the countries of Canada and the United States were being formed and their governments created, the founding fathers found inspiration in the Great Peace, drawing from the Iroquois system the concepts of representational government and of the division of the governing bodies into two separate entities—in Canada, the House of Commons and the Senate—through which decisions must pass before being acted upon.

Although centuries have passed since the Peacemaker first brought together the five nations to form the Iroquois confederacy, the system he established is still in place today. In the 1700s, the Tuscarora took a seat at the council fire. And the border that runs through the confederacy territory has meant that there are now two confederacy fires, one in Canada on Six Nations of the Grand River territory and one in the United States at Onondaga.

But even today, representatives of the whole confederacy still continue to gather around one council fire to deal with issues that affect its people on both sides of the border, continuing to follow the laws set down for them within the Great Peace.