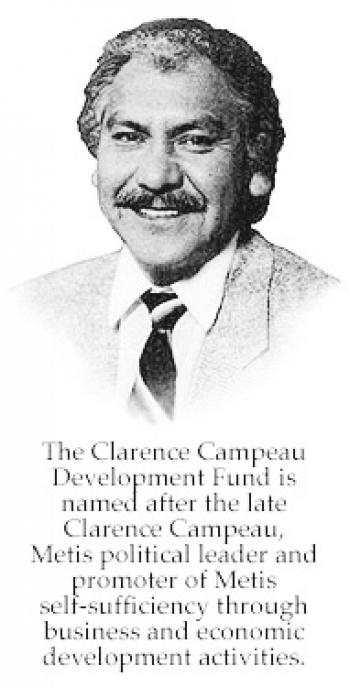 When people say someone is so generous they'd give you the shirt off of their back, they are usually speaking figuratively. With Clarence Campeau, that statement could be taken at face value.

Campeau was a man known for his generosity, for his sense of humor and for his dedication to improving the lot of the Métis people of Saskatchewan.

Campeau was born in 1947 near Rose Valley, Sask. The community he grew up in was predominantly white, but he never noticed any differences between himself and the rest of the people living there. That changed when he was in his early teens and he began dating.

He was very handsome and all the girls in town had crushes on him, which made the local boys jealous. Whenever he would go out with a girl the boys would tease her, calling her an Indian lover.

Campeau began to feel that he didn't fit in within white society so he decided to try living on reserve. Then, after being thrown off more reserves than he could remember, he discovered that he didn't belong there either.

He wandered for a while, lost, without a sense of identity, turning to alcohol to help escape from his problems. Then when he was 18 he met Napoleon LaFontaine, who was working to establish the Association of Métis and Non-Status Indians of Saskatchewan, the forerunner of today's Métis Nation-Saskatchewan (MNS).

LaFontaine told Campeau he was of mixed blood. He was Métis. He now knew who he was, where he fit. He gave up drinking for good and, once he got his life back on track, he began dedicating himself to helping other Métis people do the same.

Campeau was area director of the MNS Eastern Region II on an off over the years. He left the position once while he became sick with cancer, other times after unsuccessful election bids, but he always came back to it.

While area director he worked to bring in a number of programs designed to improve the lives of Métis people in the region. Looking for ways to create economic opportunities, Campeau formed a construction crew that built homes for Sask. Housing. When that ended, the region branched out into cabinet-making and other ventures.

But Campeau aspired to move beyond these types of projects, wanting instead to work toward having Métis people become full and active participants in the mainstream economy.

What Campeau envisioned was to see economic development among the Métis people integrated into mainstream society. That didn't mean assimilation, and it didn't mean segregation. What it meant was continuing to protect and promote Métis culture while working with non-Métis people in true partnership arrangements, where each partner had equal ownership and equal control.

He knew the province couldn't afford to run three parallel structures, one for the Métis, one for First Nations and one for non-Aboriginal people. What was needed was one integrated structure shared equally by all three groups, and designed to work for everybody.

Under Campeau's leadership the region began offering programs that addressed all of these needs. Social programs were started, along with education and training programs that took a holistic approach, dealing not only with the students but with their families and communities to help students overcome the challenges they faced in trying to get an education.

Campeau, who only had a Grade 8 education, was by and large a self-taught man who could hold his own with anyone regardless of how educated they were or how highly placed. But he knew the value of an education, and spent much time and effort getting the message out to Métis youth that they needed to stay in school. They needed to get an education in order to be successful. He'd often tell them that once you had an education, no one could take it from you.

The region started offering a preparatory class, then added a two-year business administration class and a social work program.

His dedication to the Métis people went far beyond just offering programs. He also got personally involved in helping people as well. It wasn't uncommon for him to give a person down on their luck clothes right out of his own closet, or to bring a young person who had lost their way into his home until they could get back on their feet.

Those who knew him call him a statesman and a visionary. He was a gifted negotiator, able to diffuse even the tensest of situations. He had a great sense of humor and loved to tell stories. He treated everyone with respect, with no regard to skin color or social standing. And he brought out the best in everyone he had dealings with. He had a way of making everyone feel special, from his wife and children to the people he dedicated his life to helping.

In 1997, Campeau was having problems with his heart. His arteries were clogged and he needed bypass surgery. He went into the hospital for tests and doctors injected dye into his veins so they could see where the blockages were, but it proved too much for him and his arteries collapsed.

He was only 50 years old when he died. When family and friends think back on what he'd accomplished, they also wonder how much more he could have done if he'd only had more time.

Campeau's name and legacy live on through the Clarence Campeau Development Fund (CCDF), which was established by the Métis Society of Saskatchewan in 1997. Campeau had been involved in the negotiations with the provincial government that would lead to the creation of the fund, but passed away before the organization became a reality.

The aim of the CCDF is to help improve the economic circumstances of Métis people in the province by providing funds for business development and community economic development. It also provides assistance with business planning and training to help new Métis-owned businesses succeed. It provides a first step towards Campeau's goal of self-sufficiency for the Métis people.