Chief Harry St. Denis: Statement from his family on his passing 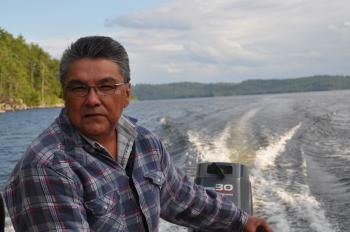 Harry was one of the longest serving Chiefs within the Algonquin Nation in contemporary times. He served as Chief of Wolf Lake First Nation for more than 30 years.

Harry was first elected as Chief on Aril 28, 1987. As soon as he was elected, the first meeting with Indian Affairs on May 14, 1987 was about obtaining reserve land for the community.

When Harry began as Chief, the band office was in his house basement because the band budget was about $16,000 annual funding. Wolf Lake First Nation now has two buildings, several businesses, staff, increased access to programs and services and an increased annual budget, all of which were built up under Harry’s management as Chief with the support and assistance of Council.

For Wolf Lake First Nations, Harry pressed the federal government to set aside a land base for Wolf Lake and he oversaw the development and completion of more than 30 years of land rights research to support the band’s demand for a reserve and recognition of Wolf Lake’s Aboriginal Title and Rights.

Under the management of Chief St. Denis, a specific legal/historical claim for a reserve is close to completion for submission to the federal Specific Claims Tribunal and another joint specific claim with the Timiskaming First Nation for an 1849 Reserve that was promised but never set aside has been presented to the federal government.

Harry is the son of Elizabeth Lavigne and David St. Denis of the Wolf Lake Algonquin First Nation. David St. Denis began as Councillor at least as early as May 1957. He was selected as Chief May 1959, re-elected March 1962, and served until 1965. David’s brother (Harry’s uncle) John St. Denis was elected Chief in May 1965 and replaced by Francois Paul, 1967.

Harry attended elementary school at the Wolf Lake traditional Algonquin settlement of Hunter’s Point and he graduated from high school in North Bay.

Most recently, Chief St. Denis had devoted time to the protection of Chaudiere Falls/Akikodjiwan sacred site, another part of his long commitment to the honouring of the land.

In addition, for the past three years, Harry was Co-Chair of the AFN Chiefs’ Committee on Lands, Territories & Resources, which had a mandate from AFN Chiefs Assemblies to seek changes to the federal Additions-to-Reserve policy, an independent Specific Claims policy and replacing the Comprehensive Land Claims Policy.  Harry was also the Quebec Regional Representative for the AFN Chiefs Committee on Human Resources Development.

Harry is survived by his wife Sheila Noah, his mother Elizabeth St. Denis, his sisters Margaret (Bunny), Lynn and Brenda, his brothers Carl, Jimmy, Jerry and by his children, sons Bruce, Tyson, daughter Toni, 12 grandchildren and one great grandchild. He is predeceased by his father and his brother Ennis (Doodles).