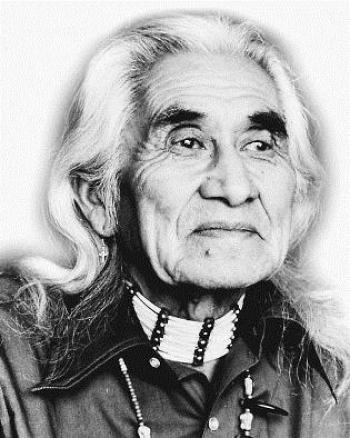 When Chief Dan George died on Sept. 23, 1981 at the age of 82, he had become an icon of gentleness and quiet humor in households across North America.

While most people knew him as the Indian who became a movie star, there was much more to this man than the image flickering larger than life on the silver screen.

Chief Dan George took his responsibility to his people seriously and understood that his achievements paved the way for others to achieve.

Geswanouth Slahoot was born July 24, 1899 on the Burrard reserve in North Vancouver. He went by the name Dan Slahoot, the English version of his childhood nickname, Teswahno, until he went to St. Paul's boarding school at the age of five.

There, where the students weren't allowed to speak their Native languages, they changed his name to Dan George, taking his new surname from his father's English name, George.

He became Chief Dan George in 1951 when he took over as chief of the Burrard band from his father. He continued in that role until 1963, when his acting career began. Chief Dan George was made honorary chief of two other bands, the Squamish and Shuswap.

George was in his sixties when he first started acting. He had worked as a longshoreman for 27 years before that, but had to give that up after he was hit by a load of lumber.

When he recovered from his injuries, he did some construction work and some boom work, and was working driving a school bus when he got his first acting job, playing Old Antoine in Caribou Country, a series on the CBC.

George received acclaim for his portrayal, and when one of the episodes of the show was to be transformed into a Hollywood movie called Smith, George reprised the role. He acted alongside Keenan Wynn and fellow Canadians Glen Ford and Jay Silverheels, Tonto, from the Lone Ranger series.

While a great time for George professionally, the recognition from the Motion Picture Academy coincided with a time of great sorrow and personal loss.

When his nomination was announced, his wife Amy of 52 years lay in a hospital bed, admitted after treatment for a chronic ulcer condition.

A few weeks later, and less than a month before George was to walk down the red carpet at the Academy Award ceremony, Amy died.

George received acclaim for his work on stage as well. In 1967, he appeared in The Ecstasy of Rita Joe, playing the role of Rita Joe's father.

Originally a minor character, playwright George Ryga expanded the part specifically for George. The play tells the story of a young Native girl who moves to the city where she meets a tragic, violent death.

The Ecstasy of Rita Joe first opened at the Vancouver Playhouse and was later performed at the official opening of the National Arts Centre in Ottawa. The play was also staged in Washington D.C., and received critical acclaim wherever it was performed.

His success, and the celebrity that came with it, made George's life busier, but there were few outward signs that he had become a Hollywood star. He continued to live on reserve in the same little house he had built for his wife and six children.

Throughout his acting career, George was always aware that in addition to being seen as a talented actor, he was also seen by many as a representative of the Indian people.

He wanted to succeed for the Indian people that would have their own self-confidence boosted by his success, and who would look at what he had accomplished and believe they too could accomplish more.

That was a responsibility he took very seriously, worried that any failure he had in his career would mean he was failing the Indian people. And, throughout his career, he refused any role he felt was demeaning to Native people.

George's determination to use his celebrity to benefit Native people was demonstrated on Canada Day, 1967, as the country celebrated its centennial.

On that day, George stood on the stage of the Empire Stadium in Vancouver in front of 35,000 people and, accompanied by his family who drummed and chanted, he performed his soliloquy, Lament for Confederation.

How long have I known you, Oh Canada? A hundred years? Yes, a hundred years. And many, many seelanum more. And today, when you celebrate your hundred years, Oh Canada, I am sad for all the Indian people throughout the land.

But in the long hundred years since the white man came, I have seen my freedom disappear like the salmon going mysteriously out to sea. The white man's strange customs, which I could not understand, pressed down upon me until I could no longer breathe.

When I fought to protect my land and my home, I was called a savage. When I neither understood nor welcomed his way of life, I was called lazy. When I tried to rule my people, I was stripped of my authority.

My nation was ignored in your history textbooks - they were little more important in the history of Canada than the buffalo that ranged the plains. I was ridiculed in your plays and motion pictures, and when I drank your fire-water, I got drunk - very, very drunk. And I forgot.

Oh Canada, how can I celebrate with you this Centenary, this hundred years? Shall I thank you for the reserves that are left to me of my beautiful forests? For the canned fish of my rivers? For the loss of my pride and authority, even among my own people? For the lack of my will to fight back? No! I must forget what's past and gone.

Oh God in heaven! Give me back the courage of the olden chiefs. Let me wrestle with my surroundings. Let me again, as in the days of old, dominate my environment. Let me humbly accept this new culture and through it rise up and go on.

Oh God! Like the thunderbird of old I shall rise again out of the sea; I shall grab the instruments of the white man's success-his education, his skills- and with these new tools I shall build my race into the proudest segment of your society.

Before I follow the great chiefs who have gone before us, Oh Canada, I shall see these things come to pass. I shall see our young braves and our chiefs sitting in the houses of law and government, ruling and being ruled by the knowledge and freedoms of our great land.

So shall we shatter the barriers of our isolation. So shall the next hundred years be the greatest in the proud history of our tribes and nations.