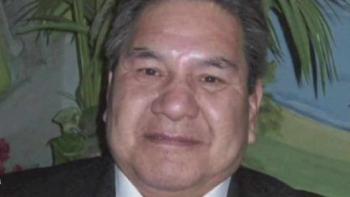 The violent death of well-loved Ojibway community leader Andrew Mixemong in Midland, Ont. in 2012 left younger brother Wayne pondering the meaning of it all.

“I think Andrew was showing us to love each other, and especially to honor and love our women who look after Mother Earth’s water, traditionally,” said Wayne Mixemong. “He died protecting a woman – his wife – and defended her from men who may have hurt her.”

The local Native friendship centre president was killed by two men when he went to meet his wife after her shift ended at Dino’s Fresh Food Deli in Midland on July 6, 2012. Police say they were dispatched to a disturbance outside the restaurant where a woman was apparently being harassed by two men to whom she denied service because the eatery was closing.

Wayne said when his brother intervened, the two turned on him and beat him to death.

“He was taken to Georgian Bay General Hospital. I spoke to him around midnight in our language and he acknowledged me. I looked at his hand and it was obvious it was broken, the knuckles looked so swollen. Andrew died not long after. He was 59 years of age.

“My brother wasn’t a strong man. He was on disability. Ten years ago he had about six feet of his intestines removed and he had a big scar down his stomach.

“He was spiritual. He followed Ojibway teachings and looked after other people first. I was always telling him to save some of his money for himself. He spent a lot on complete strangers. When he first began living with his new wife, I told him `Now you can’t bring people off the street to your woman’.”

“My brother was well-mannered and well-spoken,” added Beverly Mixemong, Andrew’s younger sister. “Life was sacred to him. He had respect for it, and for other people.”

Despite the violent circumstances of his death, both siblings are confident their brother’s spirit has transcended this earth and ascended skyward to the spirit world.

“It was very hot on that Sunday afternoon (July 8), when we held a ceremony for Andrew to lift up his spirit,” Wayne explained. “The women were singing and we were offering tobacco … a wind came along and blew the police tape and knocked over the barriers around the murder site. Even the police were scared. Then a cloud appeared in front of us and a straight rainbow shot out of it. It was the most powerful thing I’ve seen in my life.

“I think our Creator was saying my brother had left and was going to the spirit world to be with our ancestors … and our mom and dad.”

Rainbows, it turns out, were significant to Andrew. Bands of coloured light encircled the sun when his future wife, Lorraine Ashkanase, moved to town and they walked to the Midland dock together.

He referred to the rainbow as a symbol of the Creator’s enduring love for humankind, and then, on bended knee, promised his future wife he would always be with her and love her.

“Andy and Lorraine found each other late in life, and he loved her so much. I told Lorraine my brother would die for her, and that’s exactly what he did,” said Wayne.

Community-focused and a reliable volunteer, Andrew was a first-degree member of the Three Fires Midewiwin Society, and carried a pipe. He followed the powwow trail, and also crafted shakers, coup sticks, and breast plates.

“He was creative and could make anything like that. And if he made you something it was from the heart. He would put his soul into it,” said Wayne.

Given the spiritual name Neezhoday, which means “two hearts”, Andrew cherished women as life-givers and water keepers according to Ojibway teachings.

“And they were always hanging around him,” Wayne observed, laughing. “I know it’s because he took the time to talk with them. I’ve seen him so busy; working at the friendship centre, volunteering at the store, or delivering turkeys at Christmas. And a woman might be asking him questions about something. He’d say ‘I’m busy right now, but I will talk to you later.’ And he always did. He always went back and spent time with them. He had a gift for dealing with women.”

Beverly recalls a recent trip she, Andrew and Wayne took to receive cultural teachings across the border in Wisconsin.

“I gave Andrew the keys to my van and we drove the two guys in front and me in the back. Of course we always stopped for coffee. He (Andrew) always had to have his Timmy’s.

“On the way back we stopped for supper and he paid for everyone. He was so happy we were all together. His face was absolutely glowing.”

Health complications from diabetes were a constant concern for Andrew “but I told him I’d get the hang of it and then show him (how to live with the disease),” Beverly explained. “He was always telling me he didn’t want to lose his legs and I needed to show him what to eat, and other things, to help him avoid that.”

A Beausoleil First Nation member originally from Christian Island, Andrew Mixemong was beginning his second term as Georgian Bay Native Friendship Centre president and was looking forward to hosting the Ontario Federation of Native Friendship Centres annual general meeting. He was working closely with the friendship centre in Barrie with the executive director Gary Sutherland whose organization had hosted the annual event a few years past to ensure the meeting was a success, and the two were also working on an inaugural celebration to honour Aboriginal community leaders.

At a makeshift memorial of flowers, sympathy cards, and Tim Horton’s coffee cups, Wayne greeted a steady stream of well-wishers in the early days after his brother’s death. He also answered telephone calls from as far away as Alaska, British Columbia and New Zealand and witnessed more than 700 people from across North America attend the Christian and Midewiwin funeral service.