Pe Metawe Consulting: For Fun and a Better Life 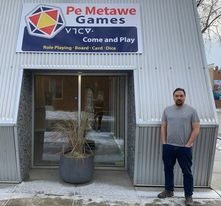 When reaching younger Indigenous people, it is critical that you speak to their interests and get their attention. Pe Metawe Consulting uses a variety of tools and resources to bring fun to the learning space and to ensure that teaching outcomes are met. The company blends the traditional values of Indigenous culture with the modern needs of their clients. As an Indigenous owned & operated organization, they are working towards the betterment of Indigenous people living in Alberta.

In Cree, “Pe Metawe” means “Come and Play,” and serves as the guiding principle of how David Plamondon and his team as they approach their work. David Plamondon is the Team Guide for Pe Metawe Consulting and a proud member of Treaty 8.

“I grew up in Slave Lake. Growing up in a small town definitely has its host of challenges,” he says. “I dropped out of high school in Grade 10. Growing up in northern Alberta, one of the challenges — and it's doubly so for Indigenous youth — is you don't see a lot of opportunity for yourself. It's right in the heart of either oil and gas and forestry, and if you're not going into one of those two industries it's really hard to see a future for yourself.”

As a result, David started working full time from age 15, starting in fast food. He moved to the city at 17 working in customer service, retail, warehousing, and as a courier.

“By the time I was 26 I realized I didn't have fulfillment in my professional life,” he reflects. “I took some time and re-evaluated my life. I had two young boys at the time and realized I had to do better, not just for them but for myself.”

“Working just to pay the bills is not the kind of life anybody should have. I hit reset on my career path and realized I wanted a more administrative or professional role,” he said.

David searched for entry level administrative work and was eventually hired by a small sign company. When the manager left the company to work for a staffing agency, she reached out to him to join that business.

“I learned a lot about myself. I learned I really enjoyed helping people and helping them find meaningful employment that they enjoyed.”

David spent over 10 years working in professional roles supporting Indigenous peoples through employment outreach and education. When Plamondon worked for Oteenow Employment and Training Society – a company that provides support to Indigenous people making transitions in their careers – he saw first-hand the challenges many have while pursuing their career paths.

“It shined a light on my own privilege as an Indigenous person,” he says. “I certainly faced my own share of struggles growing up, but compared to what a lot of other Indigenous people in Alberta face I felt really privileged I was able to get where I was. It made me want to do more proactive work in that community.”

He worked for the City of Edmonton on their Diversity and Inclusion recruitment team for a while, helping support Indigenous hiring initiatives, as well as working directly with Treaty 8 First Nations of Alberta, which supports the 24 Treaty 8 Nations of Alberta.

“If I wanted to make the types of positive impacts and changes with the Indigenous communities in Alberta that I wanted to, I had to be in the driver's seat.”

David started Pe Metawe Consulting with the hopes of taking a grassroots approach to addressing life skills gaps for Indigenous youth in Alberta. In their custom-tailored workshops, Pe Metawe Consulting utilizes social activities, interactive games, and passionate facilitators to engage participants through a model of gamification which leads to better engagement and better results.

“When you come from a First Nation community that is very homogenous and very culturally centred to a blended community like Edmonton, it can be really difficult; to lose focus on your identity as an Indigenous person and make that transition,” David explains.

“What my business partner Jayde and I really wanted to do with the work we are doing with Pe Metawe, was to start working with Indigenous youth and build a framework where they can develop key life skills and have better starting points when they reach junior high, senior high, and when they graduate from high school. That they have a better foundation of who they are as people, and have a better ability to transition into wherever the next step of their lives are.”

Pe Metawe Consulting uses a variety of tools and resources to bring fun to the learning space and to ensure that outcomes are met in a more meaningful way. Pe Metawe Games is the retail focused companion to Pe Metawe Consulting and seeks to create an inclusive and safe space for gamers from all walks of life. A proud new addition to Alberta Avenue, Pe Metawe Games aims to become a staple in the Edmonton gaming community.

“I'm a big fan of post-secondary education. I think it is really fundamental,” he says. “One of the things I heard – I think it originated in one of the Treaty 6 nations – is the concept that education is the new buffalo, meaning that for Indigenous people to be able succeed and thrive in the way we did pre-colonialism, is to have a huge focus on educating ourselves.”