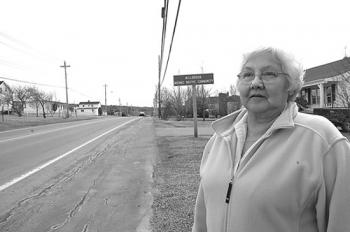 Voice faltering, Natalie Gloade talked about the unread Christmas cards she found in her late mother's mailbox, holiday wishes from residential school survivors who wanted to thank Nora Bernard for going to bat for them.

Sadly, the Mi'kmaq Elder of Millbrook First Nation, near Truro, N.S., died on Dec. 27, 2007 before she could fully learn how much she meant to a nation.

"People across Canada wrote to say thank you," explained Gloade. "They wrote to say the bit of settlement money they got didn't make up for what they suffered, but it did help them pay some bills and buy a few things. They wanted to tell her they appreciated her effort."

Just after an estimated 79,000 residential school survivors were to receive compensation cheques resulting from a landmark lawsuit that Bernard brought against the government for her mistreatment while attending residential school, she was found dead.

Even as police investigated the murder at Bernard's house, Natalie said a woman who had been helped by her mother long ago drove up to see what was happening.

"She told us she remembered when my mom used to drive taxi. She mentioned to mom that she didn't have Pampers for her baby and mom went right out and bought her some even though she was a single mom herself and raising six kids. That's how she was. She shared everything she had. And she always stuck up for people who couldn't help themselves."

As the second oldest in a family of six children, and the oldest of four sisters, "Nora took care of things when my dad left us, and she never stopped," said Bernard's younger sister, Linda Maloney, 64.

In residential school, Bernard continually stuck up for her siblings and other children who were treated cruelly.

"If she saw any of us being handled roughly, she fought the nuns," Maloney explained. "If she was in the kitchen, she'd get food for my youngest brother Albert. I recall beatings, but nothing like Nora. She suffered for all of us."

Born in 1933, Bernard was delivered by her grandmother on the Millbrook First Nation.

"She married when she was young, 16 or 17," according to Maloney. "Her husband was non-Native and she was ousted from the band. She had a difficult time with that. She lived 37 feet from where she was born and raised on the reserve, but she didn't belong. From her house, she could see the sign for the reserve, but she was no longer a member."

It took Bernard 47 years to be reinstated, her membership being accepted just one year before her death.

Described by close friends as someone with "many pokers in the fire" who "never gave up" Natalie spoke of a certain characteristic that endeared her mother to many.

"Even though lots of people condemned her and said hurtful things to her because she spoke the truth and many people don't want to hear it she wasn't unpleasant back to them. She understood people who said inappropriate things when they're in conflict and under stress and they can't be held accountable. She never held grudges against anyone."

Among her many leadership roles, Bernard was a founding member of the Native Council of Nova Scotia, and the Residential School Survivors Association.

As director of the survivors' group, she began meeting with fellow Shubenacadie survivors to discuss their experiences and try to reconcile the injustice they felt.

Legal counsellors refused to represent her until she convinced Halifax lawyer John McKiggan to take her case. The first lawsuits over abuse were filed in 1990, but it wasn't until five years later that Bernard and her fellow survivors launched a class action suit.

"I firmly believe that if it wasn't for Nora's efforts, and other survivors like her across Canada, this national settlement never would have happened," McKiggan said in The Daily News of Halifax. He credited the determined Bernard for making the settlement happen.

"After we filed our lawsuit, a number of other students from other schools filed similar class actions. Those class actions eventually merged into one national class action suit."

Bernard received part of her residential school compensation in November 2007. She was able to use some of it to pay expenses like phone bills resulting from fellow survivors who called her long distance for advice.

"Nora lived humbly in her little house. She just wanted something that was livable," Maloney said. "A councillor had put in for a house for her on the reserve and she was looking forward to that. Things were looking up for her and then she was taken away from us."

Righteousness in the lives of others is what she fought for, only to have an act of injustice take her own.

Although she was originally thought to have died of natural causes, on Dec. 31, 2007 police arrested her grandson James Douglas Gloade and charged him with her murder. On Jan. 23, 2009, Gloade was convicted of manslaughter and sentenced to 15 years in prison.