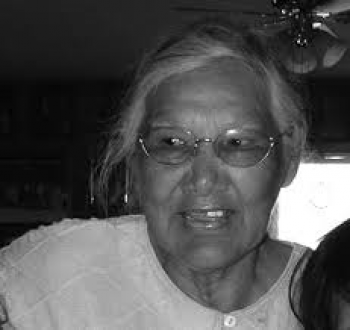 Though she wasn’t allowed to speak Mi’gmaq in residential school, Chief Margaret Pictou Labillois of Eel River Bar First Nation preserved her language because her mother and sister pressed her to speak it.

“When I was away at school I forgot certain words to make a sentence… I spoke only English and when I came home I was lost for words,” she told Judy Bowman in an interview for a New Brunswick seniors’ project several years before her death on April 19, 2013.

Pictou Labillois continued speaking her language with her family and was convinced Mi’gmaq was so important to her people’s identity that she went back to Lakefield University to learn language structure.

“On our reserve, she brought back the culture,” said Colleen Gauvin, Pictou Labillois’ oldest daughter. “She went into the elementary school teaching our students here our language and she instilled this in all of her children, what it means to us, who we are as traditional people.”

In 1939, Pictou Labillois had the distinction of being the first resident in Eel River Bar to graduate from high school, a tradition her children and grandchildren have followed. Later in 1970, she became the first woman to be elected chief in the New Brunswick region.

Born on July 10, 1923, Pictou Labillois spent her childhood picking berries and fishing with her grandfather, who took a prominent role in her life after her father died.

“My grandfather would go fishing and, of course, we thought it was our job to help him. We were just teenagers, running after him barefoot, running in the water, running to clean the fish,” she told Bowman.

“Every day in the summer my grandfather would go and dig clams on the far side of the sand bar. One day my sister said to me, ‘let’s go and dig clams with him.’ So we followed him and we went to our knees in the mud and fell over. He wore hip waders, but we had nothing for the mud. That was the last time we tried that.”

After graduating school, Pictou Labillois trained to be a nurse but feared the school fees were too much for her mother, who was raising the family alone.

“On the train home one day I met a recruiting officer and she mentioned I could send money to my mother if I joined the Air Force, so I did. My brother got a great laugh when he saw my uniform and my hat.”

In the Royal Canadian Air Force, she was posted to Rockcliff Photographic Unit in Ottawa and trained in aerial photography, taking shots of bridges and roads by hanging out of planes. She laughs as she recalls what she was told. “If you drop the camera you might as well jump after it. It will take you forever to pay for it.”

As the threat of the Japanese army crossing the Bering Strait into Alaska loomed, her unit took photograph after photograph and made maps.

“We did all the printing and making maps of the area where the Alaska Highway would go. We did the pictures from Alaska right down to the border of the United States. We would print the photos and send them back.”

Pictou Labillois served two-and-a-half years in the RCAF before returning home. After the war, she married Michael and raised 14 children. She took it upon herself to restore the Mi’gmaq language and culture with her people.

“The decision makers had no say. We were going to do it any way. Our language is such a vital part of our lives. It is who we are,” she said.

In 1970, Labillois was elected chief, serving two terms. “I didn’t think of running for chief, but my friends came to me and seemed to think I could do it. Then, when I became chief, I wondered what I had gotten into. Being a woman was, first of all, the biggest challenge… women weren’t supposed to be chief.

“It didn’t seem to change my life in any way. I suppose it was meant to be.”

Lt. Gov. Graydon Nicholas was a young lawyer working for the Union of New Brunswick Indians when he met Labillois in 1974. He found her to be a “quiet leader” and an inspiration to many people in the province.

“She took a risk with me and that’s how we got to know one another really well,” said Nicholas, quoted in Indian Country Today, as he recalled the occasion Pictou Labillois asked him to help her with her community’s land claim.

He said, as the first female chief in the province, people had high expectations of her.

“I think she more than surpassed those expectations. I always found her leadership to be very quiet leadership in the sense she would say, ‘OK, this is what we want to achieve. This is what we should do. And, let’s do it’,” he said.

Nicholas admired her for her firm belief in her language and for being a woman who respected and loved people and wanted them to come together to overcome injustices.

Toward the end of her 89 years, Labillois could be found on the beach of Chaleur Bay under a shelter with her dog, still marvelling that she was lucky enough to live “close to such beauty.” That is if she wasn’t travelling to attend meetings and powwows as an honoured speaker, or stripping ash to weave baskets in the Mi’kmaq tradition with her grandfather’s handmade tools.