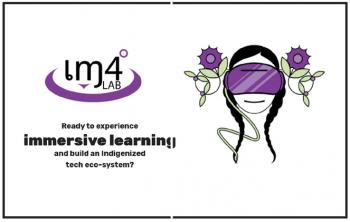 “I remember we had invited Dr. Leroy Little Bear and his wife Amethyst to come to the summit. And I got a call from him one morning… When I got that call, I thought ‘uh oh, I better really take this seriously’.” —Loretta Todd, founder of IM4 lab
By Andrea Smith
Local Journalism Initiative Reporter
Windspeaker.com

A series of new webinars has been scheduled for the next two months by the IM4 lab in Vancouver.

The talks are being called the Immersive Knowledge Transfer Gathering series, and they’re happening in partnership with the Vancouver International Film Festival Society (VIFF), and Emily Carr University.

The team at IM4 hopes to give its audience a glimpse into the worlds of digital media, virtual reality (VR) augmented reality (AR), cross reality (XR), a combination of augmented, virtual, and mixed reality technology, gaming and animation creation with Indigenous artists and creators continuing the important work they were doing before COVID-19 made the world a more dangerous place to gather in person.

“We were in the process of expanding our workshops, and bringing the workshops outside of Vancouver… And we were planning this gathering at the end of March. And then COVID happened,” said Loretta Todd, founder of IM4 lab and an Indigenous filmmaker. Her co-founders at IM4 are media matriarchs Doreen Manuel, Cease Wyss, and Tracey Kim Bonneau.

“I remember we had invited Dr. Leroy Little Bear and his wife Amethyst to come to the summit. And I got a call from him one morning… When I got that call, I thought ‘uh oh, I better really take this seriously’,” she said.

Little Bear had expressed his concerns about what he was hearing in the news. There were warnings about the dangers of COVID-19 for people with health challenges, and people over the age of 60, but it was only just the start of the toll the disease would take, so Todd was still deciding how to respond to it.

Shortly after that, Emily Carr University, which was a partner even then with the IM4 workshops, cancelled all in-person learning and moved to online only. Todd and IM4 followed suit, and have since been trying to find ways to keep going in an online only world. These webinars are part of that solution.

“Everybody’s work is a little different. Everybody’s drawing from their own cultural experience and their own histories in terms of why they’re there, and what the work is they do, and how they’re applying that in their communities and their art practice,” said Todd of the discussions each guest of the webinars will be having.

Some of the guests that audiences can expect to see are:

The series has already kicked off with digital media artist, poet and software designer Jason Edward Lewis and Flett-Wapash in a one-hour dialogue, followed by a half-hour question and answer period.

This is the standard format for each of the webinars to come.

Lewis and Flett-Wapash chatted about their experiences in the field up to now, what their main motivations are, what they still hope to accomplish, and during the question and answers, spoke about some practical applications of their knowledge, like which online apps audience members could download to create games and software from home.

According to Todd, each webinar will also be accompanied by a workshop hosted by one of the speakers, so audience members can really dig in and learn something from all of this.

The dates of the webinars and workshops are (Pacific Time):

For complete details visit the IM4 webpage at https://im4lab.com/.