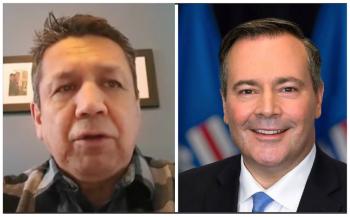 The province of Alberta is on the verge of creating the largest boreal protected region in the world, which includes habitat for the wood bison and woodland caribou, both identified as species at risk.

“Our vision of our lands is moving closer to becoming a reality,” said Mikisew Cree First Nation Chief Peter Powder, who joined Premier Jason Kenney and Environment and Parks Minister Jason Nixon for the announcement on Feb. 11.

By the end of a 30-day consultation period in mid-March, the government is set to enshrine the 143,800 hectares of additional land for the Kitaskino Nuwenëné Wildland (KNW) in legislation, said Nixon.

“We are here today as a result of remarkable collaboration between Alberta’s government, Indigenous communities, and industry. Mikisew Cree First Nation has led the collaborative work on the potential expansion, and companies … have agreed to surrender mineral agreements in the area in order to make this expansion reality,” said Kenney.

At this point, the expansion area is considered a mixed-use area, which allows timber production, watershed, fish and wildlife, recreation, energy development and other uses. However, said Nixon, there is not a large amount of industrial development in that area.

“Oil and gas industry participants recognize the ecological and cultural significance of the area and came to the table with the contribution of significant lease land holdings,” said Rob Broen, president and CEO of Athabasca Oil. He, like Powder, joined the announcement virtually.

Powder acknowledged that Athabasca Oil along with Cenovus Energy, Imperial Oil, Teck Resources, Suncor, Northland Forest Products and Alberta-Pacific Forest Industries collaborated by giving up their interests in the area.

“It’s taking all the tools that we have in place in northern Alberta and bringing it together to be able to accomplish some of our big environmental goals up there. It is also an illustration that this government doesn’t just talk the talk when it comes to partnering with Indigenous communities and industries in this province to have success with environmental issues at the same time as creating jobs,” said Nixon.

The expansion has been in the works since the establishment of the Kitaskino Nuwenëné Wildland in 2019. That wildland area comprises 160,000 hectares of land just south of Wood Buffalo National Park and is adjacent to the Birch River and Richardson wildland provincial parks. The expanded area is located between the Birch River Wildland Provincial Park and the existing KNW, south of Wood Buffalo National Park. Almost all of the proposed expansion overlaps with woodland caribou habitat and a small portion of the Ronald Lake bison herd range.