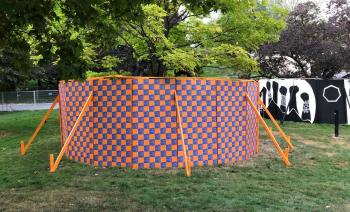 A new public art installation located at the University of Toronto’s Hart House is helping to create conservations about sustainable land use.

Titled Tree Protection Zone, the installation is made up of specially commissioned mural-sized works that speak to “preservation of life, water, and kin and how each is inextricably linked to the protection of trees.”

The project is curated by Maria Hupfield, a member of the Wasauksing First Nation, and Mik Migwans of Wikwemikong Unceded Territory. Both are faculty members in the university on the St. George Campus.

The installation was made possible through a partnership between Hart House and The Art Museum at the University of Toronto.

The temporary tree zone project precedes the permanent Indigenous Landscape Project that will be constructed on the Hart House Commons in 2022.

Hupfield said the public nature of the tree zone project has allowed for a wide audience to see it develop throughout the creation process.

“I think that we're just really following this approach where, during the pandemic, there's been a lot of projects that normally would be in the gallery. But we wanted to make work that was accessible to a broader public,” Hupfield said in an interview with Windspeaker.com.

With Hart House located right next to Ontario’s Queen’s Park legislature, thousands of Torontonians check out the work each day.

“I just feel like there's so much richness to it,” Hupfield said, adding the work was inspired, in part, by wanting to protect natural life, like the trees in the midst of a city that is constantly under construction.

John Monahan, warden of Hart House, said “The role of public visual art is such a powerful one. The presence of the Tree Protection Zone installation in the city and on the U of T downtown campus is an important visual declaration about the past, present and future of this land and the Indigenous peoples who have been stewarding it for generations.”

One of the artists involved in the project is Susan Blight from Couchiching First Nation. She currently works at OCAD University as an assistant professor. Blight’s work, titled 6 kilometres and 8000 years long, consists of hundreds of stickers placed on a tree mural.

“It took some time for me to understand exactly the totality of the project in terms of what it represents, both for the Indigenous community at the University of Toronto, but also sort of the logistics of how it was going to go. But I said yes, of course,” Blight said.

She echoed Hupfield’s perspective about the juxtaposition of trees amidst ongoing construction.

“One of the things about living in the city and being on a campus right now is that there's always construction happening because the landscape is always changing in the city in a way,” she said.

Blight’s work at the Tree Protection Zone is alongside works by Carrie Hill, Que Rock, Taqralik Patridge and Nils Ailo Utsi, Christi Belcourt and Isaac Murdoch (of the Onaman Collective), and Shuvinai Ashoona.

Blight recently completed an art residency in Italy, an experience she said “obligated” her to represent an Indigenous presence within the European art community.

“When you go to a place like Italy, as an Indigenous person, you're struck by a couple of things. One is that quite a few Mediterranean countries are in many ways the heart of colonization,” she said. “You're aware of those histories of the conflict you feel within yourself. You have certain obligations to both the land itself and to make sure that Indigenous presence is represented and valued and honoured and to bring those things forth.”

Blight added that public art can be a way for artists to help foster a more inclusive community.

“Art galleries have a history that is based in exclusionary policies,” Blight said. “A lot of the wealth of the big established galleries is built upon European wealth, wealth that was stolen from this land — from Turtle Island — and brought to Europe. Those histories within art galleries still lead to certain communities being excluded from those spaces.”