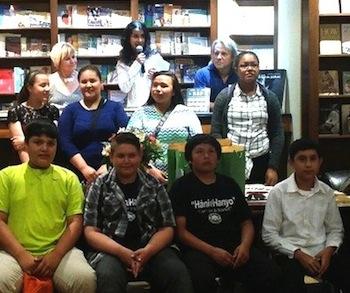 “Picking out the person to write about was easy. She was a good person. She inspired me and always made me laugh.” ~newly published youth writer Miyah Jimerson, 12, who is in Grade 7.

When he first saw the book, Sanzo Hill just whistled.

“I didn’t know what to say. I actually felt like, ‘I’m going to be famous!’ I was just really excited about it.”

The story that he wrote for the book “From the Sky: Stories of Women Who Inspire Us.” is titled “A Courageous Woman” and it’s about his mother who is a police officer. In the story, he describes her as “a woman with black hair, brown eyes and a short temper.”

The group of writers who contributed to the book travelled on June 14 from Six Nations of the Grand River to Ben McNally Books in Toronto for the launch.

The event had all the usual trappings of a book launch – food and drink, catered by NishDish, music by Cree artist Rosary Spence, hosting by world-renowned writer Drew Hayden Taylor, lots of cameras, and readings and a book signing by the authors.

The only difference with this launch was that the writers are Grade 7 and 8 students from Kawenni:io/Gaweni:yo Elementary School in Six Nations.

The book was produced under the First Nations Youth Storytelling Program of World Literacy Canada (WLC). WLC uses literacy to fight poverty and to advance the cause of social justice.

For nine months starting September 2015, WLC worked in partnership with the Kawenni:io/Gaweni:yo Elementary School and Lorrie Gallant of the Woodland Cultural Centre to deliver the program that enhances  students’ reading and writing skills in Mohawk, Cayuga and English.

Throughout the fall and winter, the students participated in writing and arts workshops aimed at promoting language learning, storytelling skills, and reflection upon inspirational women in their lives. The youth created a beautiful hardcover book with stories and illustrations. The book is available with either Mohawk or Cayuga translation.

Drew Hayden Taylor, the evening’s host, congratulated the youth and said, “I’m absolutely glowing with pride with this generation.” When he was growing up on the Curve Lake First Nation, he had no idea it was possible to be a First Nations writer, he said.

“I’m a little jealous because you’ve had such opportunities and come out with such a fabulous book,” Taylor told the youth.

“The students did all the work,” said Lorrie Gallant, an author, illustrator, artist and storyteller. “We just gave them the tools and watched them be creative, because it comes natural…We’ve all been given gifts and from those gifts we’re able to put our hands to things that bless other people’s lives and that’s exactly what these kids did. They’ve blessed all our lives.”

One of the teachers at Kawenni:io/Gaweni:yo Elementary School, Alisha Thomas-Hill said, “You can’t buy the self-esteem these kids got in this process.” It’s been, “like watching a flower bloom,” she said. She later told the audience that the student writers had not been introduced to any English grammar, reading or writing until Grade 7 because the school is totally immersion.

Several of the writers read their stories, many of which were about their grandmothers, mothers or sisters.

Iateiekanereh is 13 and in Grade 7. “I really want to be a writer,” she said and explained that her Mohawk name means “She Looks Ahead.” She’s been most inspired by her grandmother, the subject of her story. Her grandmother lives in Akwesasne, speaks the Mohawk language, is knowledgeable about the old ways and is known by people all over the world.

Ida Miller, who’s 14 years old and in Grade 8, said the process was both “stressful and happy. I wrote about my grandma,” she said, “and when I told her about it, she got a little emotional and started crying. I had to give her a hug to calm her down.”

Twelve-year-old Miyah Jimerson, who is in Grade 7, also wrote about her grandmother. “Picking out the person to write about was easy,” she said. “She was a good person. She inspired me and always made me laugh,” Miyah said. Writing her story was a mix of “hard and easy”, she said, but when she saw the book, she thought it was worth it.

At the end of the evening, all the young writers received gift bags containing signed copies of three Thomas King books. 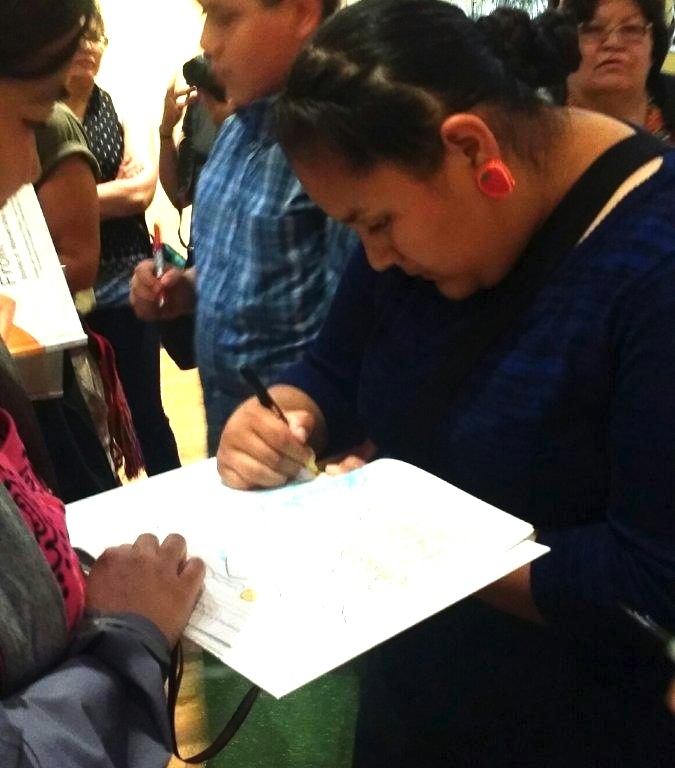 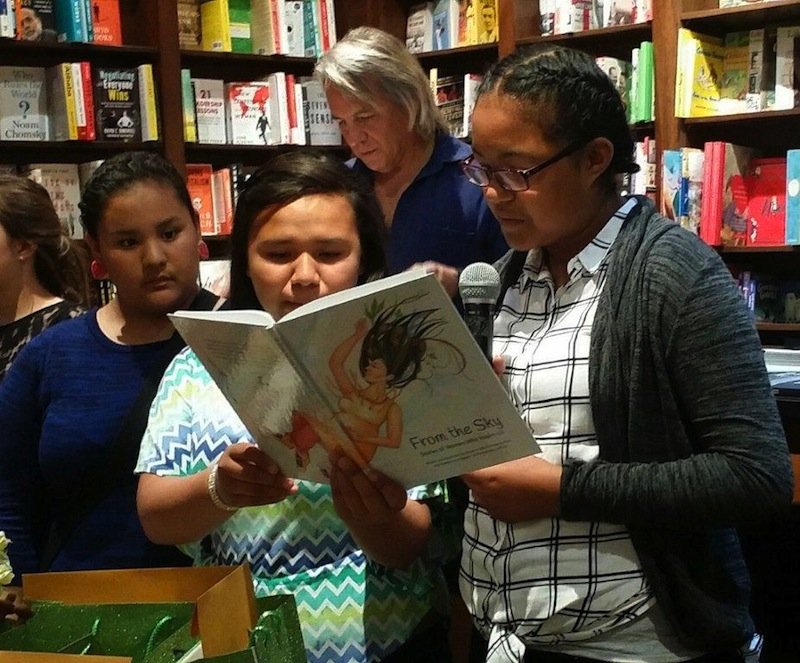