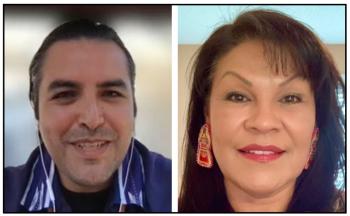 “You have treaty First Nations, you have modern day treaty, you have self-government agreements, you have pre-confederation treaties. There's a lot of interests and diversity that a national chief would have to deal with.” — Alberta Regional Chief Marlene Poitras
By Shari Narine
Local Journalism Initiative Reporter
Windspeaker.com

Chiefs hoping to vote in blocks to support a local candidate for national chief in the upcoming Assembly of First Nations election will face challenges in Ontario and Alberta where there are two contenders each from those regions.

In Ontario, AFN Regional Chief RoseAnne Archibald and Nishnawbe Aski Nation Grand Chief Alvin Fiddler – arguably two of the leading contenders for the position – will be competing for the votes of 133 Ontario chiefs.

“They’re both very strong candidates and both very capable. I can definitely see the vote in Ontario being split in that regard,” said Reginald Niganobe, newly-elected Anishinabek Nation Grand Council Chief.

“It's unprecedented that there is an Alberta candidate, and now two of them. It will be up to the chiefs individually in terms of who they feel (is) the best candidate (to) represent their interests at that level,” said Poitras.

The last time Alberta had a candidate for that position was in 2012 when then-Alberta Regional Chief George Stanley ran. There has never been a national chief from Alberta.

Ontario has also never produced an AFN national chief. However, the last president for the National Indian Brotherhood, which became the AFN in 1982, was Delbert Riley of the Chippewas of the Thames. Riley served as NIB president from 1980 to 1982.

The last Ontario contender for the position of national chief was former Treaty 3 Grand Chief Leon Jourdaine in 2014. It was in that election that Perry Bellegarde earned the first of two consecutive terms as national chief.

With the high number of contenders, it’s expected there will be multiple ballots needed before the required 60 per cent support is gained to get to a winner, said Niganobe. In that time, one of the two Ontario candidates may drop off and “that will definitely open up the other candidate” remaining on the ballot, which could result in an Ontario national chief.

“I think they have a high possibility. Both of them have good profiles, elevated public profiles. Of course, I would say Roseanne (Archibald) has a little bit more of a public profile just based on her current position,” he said.

Niganobe says he doesn’t know if it’s “imperative, but it would be nice, of course” to have the national chief from Ontario, particularly because both these candidates “do very well at what they do.”

Poitras says a national chief coming from Alberta would mean “they will have a direct ear from the Alberta chiefs.”

Poitras adds that there is a deeper need for the more wholesale change someone from Alberta may offer.

“There're some nations that are pretty disgruntled with the Assembly of First Nations because of our treaty status, and from there, some of the bills that are going through the government. And it’s perceived that AFN (is) involved in pushing a lot of the legislation through. And First Nations feel … they are not adequately consulted (by the AFN) or even by the government,” she said.

However, both Poitras and Niganobe agree that whoever leads the AFN has to keep the national scope of the office and the diversity of nations in mind.

“You have treaty First Nations, you have modern day treaty, you have self-government agreements, you have pre-confederation treaties. There's a lot of interests and diversity that a national chief would have to deal with,” said Poitras. “And the job of the regional chiefs is to ensure that the views of the chiefs in the regions are being heard and taken at the national level.”

This ballot has three women contenders. In the 2018 election, two women ran, with Sheila North, former Manitoba Keewatinowi Okimakanak Grand Chief, placing in the runner-up position with 24 per cent of the vote to Bellegarde’s 63 per cent.

As for a woman national chief, Niganobe says that “would be amazing…. (There’s) no time better than now.”

“I think it's great that more women are entering the race and putting their platforms forward,” she said. “They've never had a woman national chief and maybe it's time.”

The virtual election is scheduled for July 7.

While concerns about holding the election virtually have been voiced, Niganobe is confident that measures can be put in place by chiefs who may experience connectivity issues to ensure they are able to vote.

The AFN has been silent as to the details of the measures that have been taken to ensure all 634 chiefs across the country have the opportunity to vote successfully.

“As we advised last week, the concerns raised by some members of the AFN Executive Committee were discussed during a meeting of the Executive May 12. For additional context and on background, the AFN is working diligently to convene a successful event and election of National Chief,” said Kelly Reid, AFN communications officer, in an email to Windspeaker.com.