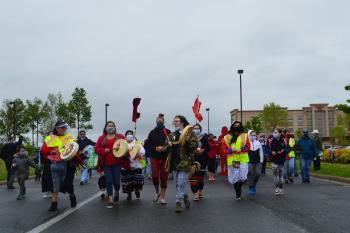 More than 100 people marched in Membertou First Nation on Saturday as part of a healing walk held in response to the recent police shootings of Indigenous people.

Andrea Moore marched holding up a red dress to honour missing and murdered Indigenous women and girls, including her cousin Cheryl Johnson. Moore thinks police officers should be mandated to learn about Indigenous people.

“With Chantel to be taken down by police force when they’re there to protect us, then last night with Rodney, it's devastating to our community,” said Moore.

“And we don’t feel there's any place safe for us to turn.”

Jeff Ward, who is originally from Metepenagiag First Nation, outside Miramichi, N.B., spoke at Saturday's event and took time to honour Levi.

“I’ve known Rodney all of my life since I was young and he was like a big brother,” said Ward.

Ward said he was still in shock from the news. He wants to return home to be with family, but can't because of border restrictions. A pipe carrier, he noted he'd never seen seven pipe carriers together like they were at the march.

“We saw a lot of community members from surrounding communities and that is a sign of hope,” said Ward.
Organizers also gave out surgical masks and hand sanitizer was readily available. Sgt. Barry Gordon of the Cape Breton Regional Police asked people to maintain social distancing and to stay in groups of 10.

Membertou Chief Terry Paul said the shooting deaths are troubling and he hopes police will do more to end racism against Indigenous and black people. He vowed more action will be taken.

"This is just the beginning of actions that we will be taking, not only our people but all people that are marginalized, and we're going to get organized and work to make sure these walls of racism are brought down,” said Paul.

“We just want to be respected.”

Claire Meuse and her six-year-old daughter Rory attended to heal and to speak out. Meuse said it's been an emotional time for her family, starting with George Floyd and the treatment of Indigenous people by police. Now she's worried about the treatment of her children.