New Indigenous child and family centre in London to be a place of healing, regeneration 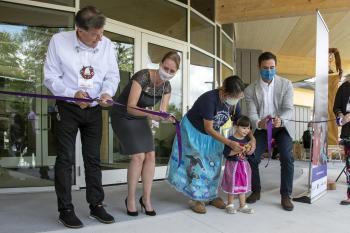 From left to right: Brian Dokis of the Southwest Ontario Aboriginal Health Access Centre, Councillor Elizabeth Peloza of the City of London, Brooke Chrisjohn and her daughter Luminous, Nshwaasnangong; and Ontario Minister of Eduction Stephen Lecce. (Photos courtesy of Nshwaasnangong.)

“We all know how much intergenerational trauma the Indigenous peoples of Turtle Island walk with, and in this space we hope to share regeneration healing, learning, and love.” — Emmaline Beauchamp
By Colin Graf
Local Journalism Initiative Reporter
Windspeaker.com

A new Indigenous space dedicated to children and families is opening in London, Ont. The turtle-shaped Nshwaasnangong Child Care and Family Centre is expecting its first group of infants, toddlers and preschool-aged children on Oct. 12, following a recent official opening which included ceremonial prayers, drumming and dancing.

Nshwaanangong means “place of the eighth star.” The eighth star in the Big Dipper fell to earth and became the Anishinabe people, according to Ojibwe legend.

The name is a gift “for honouring and sharing the gifts of the sky world—culture, teachings and language—for children, parents, and families who attend,” said Jan Martin, director of Indigenous Relations with the Southwest Ontario Aboriginal Health Access Centre (SOAHAC), the lead organization for the facility.

Nshwaasnangong will “honour and express our diverse identities as Indigenous people” and will be a “place to rekindle our language (and) honour the teachings of our ancestors in balance with Mother Earth.”

The centre will have space for 88 children who will experience culturally-relevant programming rooted in language and spirit, and is already at nearly 60 per cent of registered capacity.

The centre will be a safe and welcoming place to help families reconnect with culture and heal from the long-standing traumas of colonialism, said Brian Dokis, CEO of SOAHAC.

“Nshwaasnangong will be a warm and welcoming place for children, youth and families to rekindle and honour the cultures and languages of Indigenous people in the London area. It will be a safe place for families and communities to gather and access programs, services, activities and ceremonies that are important to reclaiming language and culture.” he said.

The centre will feature not only child care, but will also be a place for drop-in playgroups, land-based learning, ceremonies and youth and family programming, according to the centre’s website.

The project was initiated after the City of London partnered with urban Indigenous organizations and community members to engage Indigenous families about experiences with child care and early years.

Programs will include drumming, drum-making, regalia-making, specialized times for fathers and children, healthy baby checks, and creative sessions with artists who are donating their time, says.

“This is a project everyone believes in. It’s been a lot of hard work, but it’s here,” Martin tells Windspeaker.com. “It feels really nice.”

Another feature of the centre will be growing crops to help provide healthy meals for urban Indigenous children, she says.

“Our above-ground beds are ready, but it’s too late to grow this year.” Planting will begin next spring, with classes for family members on preparing food and canning. She even hopes to get an early start on the growing season if funding proposals come through to help add a greenhouse.

Language learning will be a major part of programs at the new building with staff hired to work in the Anishnabemowin (Ojibwe) and Oneida languages, which are the languages of two local First Nations.

“Everything is done in the language, in the culture,” according to Martin.

Construction of Nishwaasnangong produced its share of frustrations, including COVID-related delays and steep increases in costs due to the pandemic. Originally planned to open six months ago, the operators are now facing a deficit, Martin said.

“We’re dealing with that as well as we can. If we have to fundraise, we will,” she says.

The $5.8 million budget for building the centre was paid for by the Ontario Ministry of Education and the federal government. The City of London purchased the land and transferred it to SOAHAC to design, construct and operate Nshwaasnangong. The unique appearance, reflective of Indigenous cultures and knowledge, was designed by Two Row Architects of the Six Nations reserve.

Planning and building the centre has taken “almost five years of dedication” from the planning committee, said Emmaline Beauchamp, language consultant for Nashwaasnangong. The building will be an “accepting, supportive, safe, and welcoming space.”

“We all know how much intergenerational trauma the Indigenous peoples of Turtle Island walk with, and in this space we hope to share regeneration healing, learning, and love,” Beauchamp added.

Stephen Lecce, minister of Education, speaking at the opening ceremony, said the project was reflective of the government’s ongoing commitment to Truth and Reconciliation, and overall investment in early childhood education.

“We are firmly committed to supporting affordable and accessible childcare for families across London.”  The new centre “will provide quality and free programs for London families, as well as affordable licensed child care that proudly reflect and celebrate Indigenous cultures,” he added.

London Councillor Elizabeth Peloza told guests “this beautiful building will be so much more than just a building; it is a place for community.”  Nshwaasnangong is “needed now as we have been so isolated during the pandemic.  A sense of community is what we can all use now.”

Peloza alluded to the difficulties with the budget in saying there were “many hard conversations behind the scenes” in bring the project to completion.

City council’s involvement in helping facilitate construction is “one step on the journey” of reconciliation with London’s urban Indigenous population and neighbouring First Nations, “not the final step,” Peloza said.