New book from Bevann Fox one of hope, healing and her difficult journey through residential school 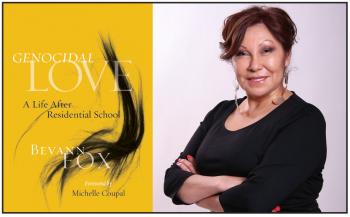 Bevann Fox with the cover of her new book Genocidal Love.

“I just want this book to be inspirational for others, to be educational and healing. I hope it impacts others in that way.” — author Bevann Fox
By Shari Narine
Local Journalism Initiative Reporter
Windspeaker.com

For Bevann Fox, one policy created and implemented by Canada's first prime minister had such an impact on her life that she was “mixed with so many emotions” when she saw coverage of the statue of John A. Macdonald hauled down by protesters in Montreal recently.

It was under Macdonald’s direction that residential schools were put in place. “Taking the Indian out of the child. I think people should be aware of that,” said Fox.

“It’s important to know the history. But to honour (Macdonald)? Or his legacy? No. That was a terrible crime that he did,” said Fox.

“I was part of that system. I was to be destroyed.”

Fox is an award-winning local Indigenous leader, YWCA Women of Distinction Award winner and celebrated local Saskatchewan television personality with Access TV’s “The Four.” She is a member of Pasqua First Nation, originally from Piapot First Nation. Her book Genocidal Love hits the stores on Sept. 12.

Genocidal Love is fiction and truth woven together depicting Fox’s life in residential school in the character of Myrtle.

Fox’s initial intent was to tell her story as a memoir for her children and grandchildren. Then she decided she wanted to reach a larger audience. However, because in 2005 she accepted financial compensation from the government for her experiences in residential school, “nothing negative could be said about the Queen,” she explained.

“That changed everything…. I specifically detailed everything through Myrtle. I put some fictional pieces in there too to add to the story, some creative writing… It was an incredible process writing this book,” said Fox.

“I’m now telling my story through Myrtle. There are many Myrtles out there.”

The new title, she adds, also emphasizes the full impact of residential schools.

“My brother died from genocide because he lived in the effects of genocide. It was really sad how he lived,” she said.

Fox also found herself getting into harmful relationships and not understanding why.

“I was internalizing that genocide, the domestic violence, the addiction. I didn’t realize I was doing it until later, realized I was doing it to myself. It’s what I’ve learned. A lot of people break that cycle and I’m happy to have broken that cycle,” she said.

Fox admits there are times when circumstances or situations still trigger painful memories. However, she no longer processes it in a destructive way. Instead, she acknowledges it personally, sometimes writes about it or talks to a friend.

“I self-care myself because everyone has their own way of taking care of it now,” she said.

Fox wants Genocidal Love to be read by both Indigenous and non-Indigenous people. For Indigenous people, particularly young people embarking on relationships, she wants them to understand their history and the legacy of residential schools. She also wants them to recognize that the behaviour their parents or grandparents may exhibit may be linked to their own residential school experiences.

She points out that some Elders who have read Genocidal Love have struggled with it.

“Everybody who reads it goes through some emotion… whether it be anger or sadness or hurt or guilt. I know a few of the elderly ladies … they read it up to a point and that was it, they couldn’t read it anymore. It was very, very traumatic for them,” she said.

For non-Indigenous readers, Genocidal Love offers an “educational piece” and builds on the work undertaken by the Truth and Reconciliation Commission which offered its final report on residential schools in 2015.

“The non-Indigenous (people) … don’t know our history. They don’t know where we come from even before the residential school. I think it’s important that they learn this. Racism is part of that whole (situation), coming from that genocide and that policy,” said Fox.

In the preface to Genocidal Love, Fox writes, “The character of Myrtle is also bigger, though, than my own personal story. She represents thousands of other First Nations girls … and First Nations women.”

It’s an important message from Fox.

“Hopefully for the ones that have been through experiences like Myrtle, that they learn from this or heal from this book or it will help them to open up and start their healing journey or start talking about it, breaking their own cycles if they have any,” she said.

“I just want this book to be inspirational for others, to be educational and healing. I hope it impacts others in that way.”

Genocidal Love offers an unique look into the process of healing and personal reclamation that follows Myrtle's escape from genocide. It is a difficult journey, filled with hope and determination to take back the voice that was stolen from her when was sent to residential school.at the age of seven.

Fox will embark on a tour for her novel, most of which she expects will be virtual in this time of COVID-19.