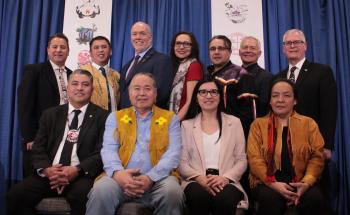 The seven Carrier Sekani First Nations have signed a partnership agreement with the province of British Columbia that gives them economic certainty in the Omineca region through revenue sharing.

The Pathways Forward 2.0 Agreement will provide $175 million over five years to develop the forest industry, local economy and culture.

“All we really want for our communities is to thrive, and when our communities thrive our neighbours thrive—British Columbians and Canadians,” said Carrier Sekani Tribal Chief Mina Holmes. She was speaking at a joint announcement with the province Jan. 29 at the Uda Dune Baiyoh (House of Ancestors) Conference Centre in Prince George.

The agreement helps close the social and economic gaps between us and our neighbours, said Holmes.

“Agreements like we’re doing today … ensure that true economic independence means having the capacity to participate in economic activity on the lands,” said Premier John Horgan.

The NDP/Green coalition government completed the agreement with the Carrier Sekani First Nations, which the Liberal government under Premier Christy Clark had begun with Pathways Forward 1.0 in 2016. This agreement builds on the interim agreement of 2017.

But the history of negotiations began well before that, with the Carrier Sekani Tribal Council, the Carrier Sekani First Nations and the province in 2012-13. In 2014, a Natural Resources Protocol was signed. In 2015, Collaboration Agreement and Environmental and Socio-Cultural Initiatives Agreement were signed.

Former Carrier Sekani Tribal Chief and now Stellat'en Chief Archie Patrick and Burns Lake Band Chief Dan George were at the negotiation tables for the past six years. Burns said the chiefs themselves carried out the negotiations, putting aside community differences to better the region.

“This is reconciliation in action. This is not the end, but the beginning of a new Crown to First Nations relationship. The resources we receive will help us work toward closing the socio-economic gap in our communities because the resources will stay in our communities, and stay and benefit our northern economy,” said George.

“Over the next three to five years we’re going to use (the resources) to bring back what we used to be, what our grandparents and great grandparents were,” said Patrick, who added he viewed this day as “Year Zero for us as Native people of this land.”

“Step-by-step we come together in the spirit of reconciliation towards a truly historic partnership for self-determination and self-government, one that offers economic opportunities that will benefit all the communities and people in the Omineca region for generations to come,” said Scott Fraser, minister of Indigenous Relations and Reconciliation.

To this end, $12.5 million over five years has been allocated to build on governance processes and structures, with a goal of full self-government. There is also $25 million for capacity funding for implementing the agreement and continuing negotiations on a long-term, comprehensive reconciliation agreement, which would not only involve the Carrier Sekani First Nations and the province, but also the federal government.

Other funding allocated for five years through the agreement will see $12.5 million for socio-cultural programs to revitalize Carrier and Sekani languages and culture; and, $40 million for accommodation for impacts on the land from forest and range activities in the territory, which will create certainty and predictability for the forest sector in the region.

Funding is rounded out with a wealth fund that will be invested to generate ongoing revenues to support growth and development in Carrier Sekani First Nations communities. Initially, $15 million will be allocated for 2020-21.

“We deserve the opportunity to enhance our communities’ well-being from resources that are taken off our unceded territories,” said Tl'azt'en Nation Chief Beverly John.