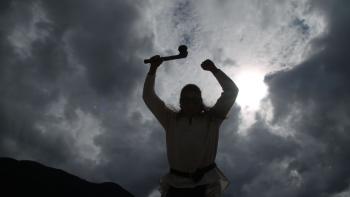 Nations at War will be shown on APTN starting Sept. 19.

“We need to embrace these stories and say we really are an important part of what happened.” — Tim Johnson
By Sam Laskaris
Local Journalism Initiative Reporter
Windspeaker.com

A second season of a television series that features battles Indigenous people fought, sometimes amongst themselves, will begin later this month.

The series Nations at War will be shown across Canada on the Aboriginal Peoples Television Network (APTN), premiering Sept. 19. As was the case for the inaugural season of the series, the second year will consist of 13 half-hour episodes.

Each episode of Nations at War focuses on the battles Indigenous people participated in on the continent now known as North America in order to protect their territories. All these battles contributed to various mass migrations of people and ended up reshaping the continent.

Friesen said the second series does not feature any changes from Season 1.

“We have the format down now,” he said. “The way it is presented, it’s pretty uniform from last season.”

Friesen said the series has included more than 1,200 CGI shots.

“They are very action packed,” he said of the episodes. “Pacing is very key to keep things moving.”

He is proud of all 13 of the episodes in season two. But Friesen believes the third and 11th episodes are especially noteworthy.

Episode three focuses on the Seven Years War, which began in 1756 and continued until 1763.

During this conflict, the Abenaki people had their traditional land claimed by both France and Great Britain. The Abenaki fought for both sides during this war.

“There’s a lot of players involved in that one,” Friesen said of the episode. “I like it because there’s a lot of stuff going on in terms of a shift of allies.”

As for the 11th episode of season two, it focuses on the Lakota, and their migrations west, in not only present day Canada but in the United States as well. Some of the Lakota battles in this episode took place in modern day South Dakota and North Dakota.

“It was important for me, and I know for Tim as well, to have a bona fide nation of American people and show that,” Friesen said.

Other Indigenous groups featured in the second season include the Anishinaabe, Odawa, Maliseet, Mohawk, Métis, Tk’emlups and Nimiipuu.

Johnson believes the stories told in Nations at War need to be more broadly known and shared. After all, these stories help explain how a country and continent were created.

“As Canadians we need to embrace these stories and say we really are an important part of what happened,” Johnson said.

Many people know that modern day North America was originally occupied by Indigenous people, but in the early 16th century Europeans arrived and began to establish colonies.

Both the settlers and Indigenous people had mass migrations in search of new lands throughout the continent.

Many of these migrations involved conflicts, which are presented in the various episodes of the series.

Friesen added Nations at War has proven to be educational, even for some Indigenous people. That’s because many Canadian historical books tend to focus on heroes, as such as generals from the British military. Friesen said Indigenous individuals who played vital roles are often overlooked.

But that is not the case for episodes in Nations at War, which document the efforts of various Indigenous participants as well.

Friesen said among those who worked on aspects of the series were people from a variety of backgrounds.

“It also opens up conversations about things that happened,” Friesen said of the series’ diverse crew members. “It makes them want to dig into their history as well.”

“He was a huge component to this series,” he said. “When the music is added, it turns into what we want it to be, which is an epic series.”