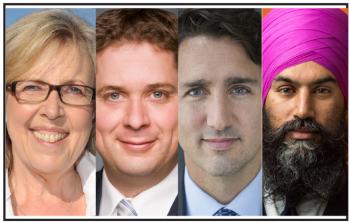 “What we’re talking about is addressing the environmental concerns and the Indigenous concerns up front, getting that out of the way, so that there can be a geographic space where big projects can get built again.” —Andrew Scheer, Conservative leader
By Shari Narine
Windspeaker.com Contributor

“(Trudeau) wanted to fight hard to keep SNC-Lavalin out of the courts, but he’s going to drag Indigenous kids to court? That is wrong. How could someone do that?” asked New Democratic Party leader Jagmeet Singh.

It was his opening salvo when the federal election debate Monday night turned to the segment on Indigenous issues. Singh chose to immediately highlight the fact that the Liberal government filed papers with the Federal Court last Friday to force a judicial review on the Canadian Human Rights Tribunal’s ruling to compensate children wronged through the on-reserve child welfare system.

The answer to that question was perhaps the only time Liberal leader Justin Trudeau and Conservative leader Andrew Scheer agreed.

The day before the government’s announcement, Scheer said the Conservatives would call for a judicial review on the CHRT’s ruling, which would see $40,000 paid to each child removed from their homes through the child welfare system from Jan. 1, 2006 to a date yet to be determined by the tribunal.

“This decision will have massive huge ramifications for several aspects of the way the federal government provides services to Indigenous Canadians,” said Scheer. “It also is a very large significant settlement amount and I believe that when you’re dealing with these of types of important public policy issues, that it is legitimate to say that it should … have a judicial review.”

Trudeau’s response was the one he has been using since the writ dropped for the election a month ago, and he invoked the Assembly of First Nations national chief’s name in doing so: Perry Bellegarde has said no government has done more for Indigenous peoples than this Liberal government.

Trudeau also pushed the newly-passed child welfare legislation, which will see control and oversight of Indigenous children in care remain within their communities. Funding for those services has been promised in the 2019 platform.

Much of the Indigenous issues section devolved into a discussion on Canada’s ability to build pipelines.

Scheer pitched a national energy corridor, saying, “What we’re talking about is addressing the environmental concerns and the Indigenous concerns up front, getting that out of the way, so that there can be a geographic space where big projects can get built again.”

Scheer said his government would include a Cabinet minister, whose priority would be to oversee consultation with Indigenous peoples.

Like Trudeau, Scheer also invoked Bellegarde’s name. The national chief’s First Nation is within Scheer’s Regina—Qu'Appelle riding. Scheer said Bellegarde and other Indigenous leaders couldn’t say what “free, prior and informed consent” means. Without a clear definition, Scheer said he could not support fully the United Nations Declaration on the Rights of Indigenous Peoples (UNDRIP).

“When you talk about free, prior and informed consent, that leaves a great deal of uncertainty about what that means. And there are large numbers of Indigenous communities who want these energy projects to succeed, and we need certainty and clarity around that,” said Scheer, adding it wasn’t right “if any one First Nation can veto a project.”

“That is the basis of our national energy corridor that I am proposing, so we can take care of these types of consultations so we can balance the needs to preserve and recognize and protect Treaty rights and also get to a place where big projects can proceed again,” he told journalists after the debate.

Trudeau, Singh and Green leader Elizabeth May all committed to adopting UNDRIP.

May also said that the Calls to Action from the Truth and Reconciliation Commission and the Calls to Justice from the National Inquiry on Murdered and Missing Indigenous Women and Girls would be implemented by the Greens.

“It’s not a short-term project. It’s up to settler Canadians to bring justice,” she said.

May went head-to-head with Trudeau, Scheer and Singh on climate, starting the discussion by referencing the AFN and a recent resolution declaring a climate emergency and putting it as a top priority.

However, that was as far as the Indigenous context went. Discussion – and criticism – centred on the usual emission targets, arguing science, scrapping the carbon tax, and the balance of tackling the environment with growing the economy.

“Indigenous” was the third of five segments, but even with that Indigenous people’s concerns were largely absent in the two-hour event. Topics on economic insecurity, human rights, and environment and energy could have easily included policy or actions pertaining to Indigenous peoples, but did not.

The Indigenous issues section was moderated by bureau chief for the Toronto Star Susan Delacourt, who had a hard time keeping leaders from speaking over each other. At times, their statements were incomprehensible.

The debate included six party leaders, including People's Party of Canada leader Maxime Bernier, who asserted he was the only leader that was willing to take “bold reform” and build a new relationship with Indigenous peoples based on implementation of property rights on reserve, and “self-reliance for these communities.” All the other leaders, he said, supported the status quo, “but the system is broken.” Bernier was called out earlier in the debate for his divisive comments and social media messages on immigration and climate action, like calling the 16-year-old climate activist Greta Thunberg “clearly mentally unstable”.

Also included was Bloc Quebecois leader Yves-Francois Blanchet, whose party is running candidates in Quebec only. Saying the Bloc also supported UNDRIP, Blanchet went on to affirm that First Nations are indeed Nations, just as Quebec is a Nation and Canada is a Nation.

“And a nation does not put its culture, its language, its heritage in the hands of another Nation.” He said all the declarations, reports and inquiries on Indigenous peoples bring “something real and respectful for them.”

It was a crowded stage and that provided no time for in-depth discussion on issues or policies.