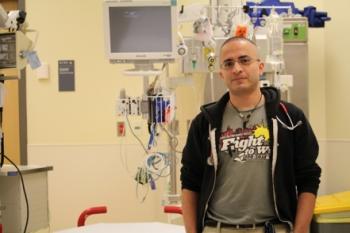 “… reconciliation is premature until the Canadian government and its various institutions, including the medical system, the medical establishment, has really genuinely come to terms with its past. Let's start to repair the harm it's done.” — Dr. Samir Shaheen-Hussain
By Shari Narine
Local Journalism Initiative Reporter
Windspeaker.com

“Fighting for a Hand to Hold”, a book by Dr. Samir Shaheen-Hussain, outlines the unfair, unwritten policy that for decades saw Cree and Inuit children from Nunavik medevaced by air to hospitals in the south with no caregiver to accompany them, and the campaign that ended that practise.

“This is a book around medical violence inflicted on Indigenous children in Canada throughout its history,” said Shaheen-Hussain, a pediatric emergency physician and assistant professor in the Faculty of Medicine (McGill University).

He says after years of accepting that Cree and Inuit children came from the north without their parents for medical attention it hit him in the summer of 2017 when two Inuit children made that same trip, alone, to Montreal Children’s Hospital.

“For a reason I still can’t totally explain, those two kids— I took care of them in emergency—for some reason, just got to me,” Shaheen-Hussain told Windspeaker.com.

He recalls hearing nurses and clinicians condemning parents for not accompanying their children.

“There was just such a significant misunderstanding of the practise… because of these pervasive stereotypes that exist in health care. The thinking was that it was the parents who chose not to come, when they were prevented from coming,” said Shaheen-Hussain.

Since Évacuations aéromédicales du Quebec (EVAQ) began providing service in the 1980s, its trips south with sick children did not include caretakers. While this also affected non-Indigenous children, Indigenous children were disproportionately impacted.

With this new realization, Shaheen-Hussain spearheaded the #aHand2Hold campaign in January 2018. It was a rollercoaster ride, he says, with some victories and some defeats. Eventually, in June 2018, the Quebec government brought in a policy allowing caregivers to accompany their children. It took a couple of months for the policy to kick-in, but now two years later, Shaheen-Hussain is pleased with the consistency of the results.

It wasn’t the first time a change had been requested to the no caregiver policy, including Inuit parents making that request. But #aHand2Hold was the campaign that made the difference.

“Often times people say the campaign was really well organized and that was why it was effective and that may have played a role, but I think the biggest thing, there's been a shift in the political terrain over the last 20 or 30 years,” Shaheen-Hussain said.

He marks the beginning of that change at Kanehsatà:ke and the so-called Oka crisis in 1990. It was followed by numerous initiatives led by Indigenous peoples asserting their autonomy and sovereignty and defending the land.

“Those have had an impact, I think, in people realizing … grave injustices have occurred here through the process of colonization and many people are coming to terms with there’s been a genocide,” said Shaheen-Hussain.

The book’s foreword is written by child and family advocate Cindy Blackstock, who says Shaheen-Hussain demonstrated “courage to stand up to a system designed to be deaf to the suffering” of Indigenous people.

“To me courage is what those parents and families did to speak out against the non-accompaniment rule in the context of their kids being sick, them obviously being incredibly stressed out because of the child's illness, and then despite that speaking out against a government agency that could have theoretically made their lives challenging the next time one of their kids needs to be medevaced,” he said.

“I didn’t want to tell the story of Indigenous children and their communities, but I did think it was important to tell the story of the medical establishment in a way that is not often really told. We are told that, at worst, that medicine is neutral and, at best, it’s a benevolent domain when in fact it's fraught (with), essentially, this criminal history, this genocidal history,” he said.

Shaheen-Hussain used the opportunity to point out the “longstanding history of medical violence” against Indigenous children.  In a chapter devoted to “medical colonialism and Indigenous children,” there is heavily researched and cited information on the use of smallpox and tuberculosis (TB) as extermination methods; experimenting with malnutrition, starvation and the BCG vaccine for TB; forced sterilization of women and girls; and the impact of the child welfare system.

Shaheen-Hussain says he was driven to write this difficult accounting of medical colonialism and systemic racism out of “responsibility and solidarity.”

“As healthcare workers, allying in solidarity with Indigenous communities is key, but to me reconciliation is premature until the Canadian government and its various institutions, including the medical system, the medical establishment, has really genuinely come to terms with its past. Let's start to repair the harm it's done,” said Shaheen-Hussain.

“The chasm, the gap is so huge of where we should be and where we are and until that happens, reconciliation feels like it’s just an empty term.” 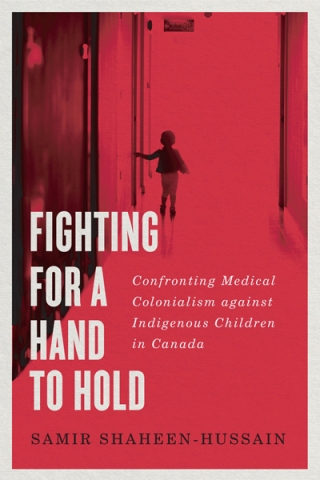 All author royalties from sales of this book will be redirected to groups and initiatives that support Indigenous self-determination and that are concerned with the health and wellness of Indigenous children and youth: Proceeds from book sales at public events will go to Indigenous land-defence initiatives and resurgence movements.