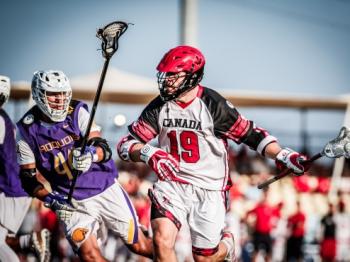 The Iroquois Nationals still have an opportunity to bring home some hardware from their world championships.

But members of the men’s field lacrosse squad would prefer to be battling it out in the gold-medal match instead of the bronze-medal contest they will actually compete in.

The Iroquois Nationals had their gold-medal aspirations come to an end on Thursday when they were downed 15-4 by Canada in a semi-final game at this year’s world tournament, being staged in the Israeli city of Netanya.

Despite that loss, the Iroquois Nationals still have a chance to return home with a medal. They will square off against Australia in Friday’s bronze-medal game.

The United States defeated Australia 14-5 in Thursday’s other semi-final. The Americans will now face the defending tournament champion Canadians in Saturday’s gold-medal contest.

The Iroquois Nationals are now hoping to match their efforts from the 2014 world tournament in Denver. They captured the bronze medal at the event.

The Canadians took charge of Thursday’s semi-final scoring six unanswered goals before the Iroquois Nationals netted their first. Canada was then able to cruise to victory after it built up a 10-2 lead at halftime.

“We played great today, putting up 15 on a pretty good defensive team,” said Mark Cockerton, who had a team-high four goals for the Canadians.

Cockerton, who is from Oshawa, Ont., added it was key for his side to get ahead early.

“We got off to a hot start, went up 6-0 in the first quarter,” he said. “Against this talented of a team you always want to get off to a good start.”

“I think that was our best performance thus far,” he said. “We’ve challenged our guys to get better every day and today our coaching staff had them well prepared. Overall, a tremendous effort.”

This year’s 10-day world championships attracted 46 clubs. They competed in various divisions based on not only their calibre but also their country’s previous experience in the sport.

The Iroquois Nationals are in the highest-calibre Blue division.

Prior to this year’s tournament the brass of the Iroquois Nationals was hoping this would be the year the club would win its first global tournament.

The odds of that happening appeared to be in the team’s favour, especially since for quite some time it looked like Canada might not even be sending a club to this year’s tournament.

Canadian national team players were in a labour dispute with officials from the Canadian Lacrosse Association and were threatening to not play in the world tourney. But the players’ association and the sport’s governing body ratified a new deal in mid-June, prompting the decision from the Canadian team to attend and attempt to defend its world title in Israel.

Meanwhile, the Iroquois Nationals also had some obstacles to overcome. Members of the squad had their trip to Israel delayed because of some passport procedural issues as they attempted to fly out of Canada.

Members of the squad, who live in both Canada and the United States, prefer to travel using their Haudenosaunee passports. The club was eventually permitted to travel to Israel but it only arrived the same day its first tournament match was scheduled for.

The Iroquois Nationals ended up losing their opening match, 17-9 versus the U.S.

But they rebounded from that setback and registered victories in their next two outings, 18-7 over England and 16-9 versus Australia.

The Iroquois Nationals were then doubled 10-5 by Canada before concluding their round-robin schedule with a 14-7 win over Scotland.

The Iroquois Nationals then earned a semi-final berth by downing Puerto Rico 15-4 in a quarter-final game.

Lyle Thompson, from New York’s Onondaga Nation, scored twice for the Iroquois Nationals in their semi-final game. Thompson is also a member of the National Lacrosse League’s Georgia Swarm.

Thompson’s teammate with the Swarm, Randy Staats, also scored a goal on Thursday. The other Iroquois Nationals’ goal was scored by Brendan Bomberry, who served as the captain of the Syracuse University men’s field lacrosse team this year.

Both Staats and Bomberry are from Ontario’s Six Nations.