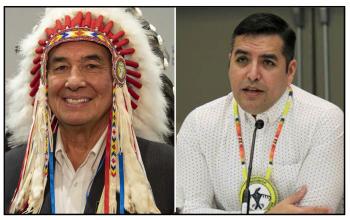 “You've got four at least in Canada; solutions calling out for implementation. And if that's done, I'm not sure we need a new social contract or social agreement.” — Chief Wilton Littlechild
By Shari Narine
Local Journalism Initiative Reporter
Windspeaker.com

The International Day of Indigenous Peoples, celebrated on Aug. 9, was established in 1994 by the United Nations General Assembly. This year it has as its theme, “Leaving no one behind: Indigenous peoples and the call for a new social contract.”

As far as Anishinabek Nation Grand Council Chief Reg Niganobe is concerned, the Truth and Reconciliation Commission’s 94 Calls to Action is a social contract in Canada, and stronger yet are the treaties, he says.

“The contracts themselves already exist in terms of treaties and other obligations the governments are technically supposed to have, but we're not seeing the benefit of that at the current time in my opinion,” said Niganobe.

Six days before the world marked the International Day of Indigenous Peoples, Curve Lake and Hiawatha First Nations, members of the Anishinabek Nation in Ontario, observed Aug. 3 as a Day of Mourning.

That date was the 215th day of the year and honoured the 215 unmarked graves uncovered by Tk'emlúps te Secwe̓pemc Nation on the grounds of the former Kamloops Indian Residential School in British Columbia.

Niganobe is hoping that the physical findings of unmarked graves are an awakening for the country.

“I think it's unfortunate that it takes events like this to kind of come forward before a lot of that movement takes place,” he said.

Niganobe points out that the TRC report on the legacy of the residential school system included a volume on lost children and unmarked graves in the report it released in 2015.

“You look at those reports and you do have all those potential avenues to take. It’s a matter of just addressing them,” he said.

“We do have existing agreements which some people call contracts (and) we call them treaties,” said International Chief Wilton Littlechild of Maskwacis in Alberta.

Littlechild says Canada does not need a “new social contract.” He points to existing agreements, which include treaties; the United Nations Declaration on the Rights of Indigenous Peoples (UNDRIP), with the federal government recently passing a bill for its implementation; the 94 Calls to Action delivered by the TRC in  2015; and the 231 Calls for Justice that came in 2019 from the National Inquiry into Missing and Murdered Indigenous Women and Girls (MMIWG).

“You've got four at least in Canada; solutions calling out for implementation. And if that's done, I'm not sure we need a new social contract or social agreement,” said Littlechild.

He was one of three commissioners with the TRC and has been active for decades at the international and national levels working for the rights of Indigenous peoples, including holding key roles for the UN on human rights and Indigenous rights.

“Those are solutions that are there that all need just to be implemented. I shouldn't say ‘just’ because it's not that easy. Had they been implemented already I think we'd be farther ahead than where we are today,” he said.

But nothing short of political will and individual commitments will make these social contracts happen, he says.

And the implementation of Calls to Action 53 through 56, which directs the creation of a National Council for Reconciliation (NCR).

“The purpose of that was … to be an independent oversight body to check on what exactly is going on across Canada. So where there's good practices we can learn from each other. Where there isn't any action, to question why there's no action,” said Littlechild, who was one of three commissioners on the TRC.

He adds that the NCR could also be an independent oversight body for the MMIWG’s Calls for Justice, considering both the TRC and MMIWG national inquiry call for the implementation of UNDRIP.

“Had (the NCR) been in place three to four years ago even, one or two years after our report, we would have been further ahead with respect to reconciliation, with respect to enforcement of treaties, the Calls for Justice, implementation of the declaration. They all seem to merge into one solution and that's implementation… We have the solutions in place. We just need to activate them,” said Littlechild.

As for the delay on the creation of the NCR, Littlechild, who was chair of the interim committee to look at establishing the NCR, knows only that they turned in their report to the government in June 2018.

The Crown-Indigenous Relations’ website reiterates Ottawa’s commitment to establishing the NCR. However, the only details offered are confirmation of the receipt of the report and the 2019 budget announcement of $126.5 million in fiscal year 2020-2021 to establish the NCR.

“My own timeframe is (that it’s) long past,” said Littlechild, but “won’t say the delay has been intentional.”

As for the federal legislation creating the UNDRIP Act, it sets aside two years to create an implementation plan. The legislation obligates the federal government to “take all measures necessary to ensure that the laws of Canada are consistent with the declaration.”

Littlechild says he is concerned about what will happen in moving forward with UNDRIP should the federal government call an election soon, which is strongly anticipated.

“Ever since I was a Member of Parliament myself I've always felt and argued that our issues should be non-partisan,” said Littlechild, who was the first treaty First Nations person to serve as an MP, a position he held for the Progressive Conservatives in the Wetaskiwin-Rimbey riding from 1988 to 1993.

“I think that we have a relationship with the Crown. It's not a political party. So I think it should be non-partisan. Indigenous issues should be a challenge to all parties to work together with us on solutions. When we become a debating point then nothing happens.”

Niganobe agrees, saying all the reports that have been undertaken deal with “non-partisan issues.”

He also says that Indigenous issues need to be “incredibly high” on party platforms, in both the upcoming federal election and the upcoming Ontario election.

“To me, those contracts already exist. It's just an obligation on their part to start fulfilling them.”

On its website, the UN points to apologies, truth and reconciliation efforts, and legislative and constitutional reforms that have been undertaken over the years by countries to address how Indigenous people have been marginalized and excluded from political and economic activities. Despite these actions, inequalities still exist.

“Therefore, the building and redesigning of a new social contract as an expression of cooperation for social interest and common good for humanity and nature, is needed,” says the UN.

“The new social contract must be based on genuine participation and partnership that fosters equal opportunities and respects the rights, dignity and freedoms of all. Indigenous peoples’ right to participate in decision-making is a key component in achieving reconciliation between Indigenous peoples and States,” reads the UN site.

August 9 marks the day of the first meeting in 1982 of the UN Working Group on Indigenous Populations of the Sub-Commission on the Promotion and Protection of Human Rights.