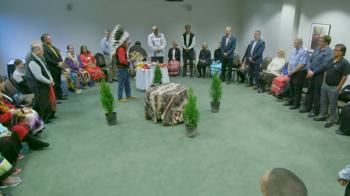 “When we’re talking about long-term management of waste we're talking into the hundreds and thousands of years. We want to make sure we get it right and we need to hear from as many people as possible.” — Karine Glenn, strategic project director for the Nuclear Waste Management Organization
By Shari Narine
Local Journalism Initiative Reporter
Windspeaker.com

Indigenous engagement for the development of a strategy for the storage of low and intermediate radioactive waste has been hampered by more pressing concerns, including the coronavirus pandemic and forest fires blazing in many regions of the country.

“I think it's been a difficult time for the Indigenous communities,” said Karine Glenn, strategic project director for the Nuclear Waste Management Organization (NWMO). “It’s just taking a little bit longer simply because of the other priorities they have in their communities.”

However, Glenn stresses those voices are important as the NWMO holds virtual engagement sessions that will inform their recommendations to the Natural Resources minister on a long-term strategy for the handling and storage of low and intermediate radioactive waste.

These consultations do not focus on used nuclear fuel, but instead on low-level waste, like mops, gloves, paper towels and other day-to-day tools of operations, and intermediate waste, such as the resins that filter the pool water.

“The Nuclear Waste Management Organization believes that Indigenous people have a really integral and important role to play. These kinds of projects cannot proceed without having Indigenous support,” said Glenn.

The NWMO has a reconciliation policy in which it recognizes the historical wrongs that have been perpetrated against Indigenous peoples in Canada and are “really committed to building a better future together with Indigenous communities,” said Glenn.

Glenn points to a three-day NWMO-hosted Canadian radioactive waste summit in March, in which one-quarter of the 65 speakers, facilitators and panel members were Indigenous. Of the 500 registrants, 15 per cent self-identified as Indigenous.

On Aug. 26, NWMO will host a virtual engagement session in Alberta on the development of a federal integrated strategy for radioactive waste. However, it won’t be the only opportunity for Indigenous communities or organizations to take part, says Glenn.

NWMO is offering to work with any Indigenous community across the country who is interested in “having a dialogue” to set up forums or formats.

The discussions in Alberta are particularly timely as this past April the province joined New Brunswick, Ontario and Saskatchewan in signing a Memorandum of Understanding that commits them to collaborate in advancing Small Modular Reactors (SMRs) as a source of clean energy. SMRs are nuclear reactors that produce 300 MW of electricity or less and are seen as an alternative to diesel-generated power in isolated and northern communities.

At this point, says Glenn, Alberta has no nuclear waste or nuclear generation.

“Moving forward with nuclear energy, if that was the path that Alberta would wish to move forward with, doesn't necessarily mean that they would host a disposal facility, so that's not necessary.  But I think it's important that if you agree to in the future to having nuclear energy as part of your energy policy in the province, you also get an opportunity to participate in a dialogue about the long-term management of its waste,” she said.

There are numerous options for storing this level of radioactive waste:

This kind of radioactive waste, says Glenn, does not require a deep geological repository as does used nuclear fuel. Instead, it can be stored “just below (the surface) tens of metres deep,” according to the international best practice.

Regardless of the type of radioactive waste that is being stored, Glenn stresses that all facilities are designed to ensure public safety.

There are economic benefits to a community that hosts the waste site, she adds, including jobs during the construction phase and for operating and monitoring the facilities.

However, Glenn is quick to point out, this phase of the consultation does not involve the site of the repositories, and NWMO has not been tasked with recommending sites.

“We’re at the step before that. We are looking to say what kind of facility we should build and how many of them should be build,” she said.

Glenn does not anticipate the recently called federal election to delay the consultation process as NWMO’s work is funded by the waste owners and not the government. However, it will delay the final recommendations she had hoped to deliver to the minister by the end of 2021.

The government needs to revise its radioactive waste policy framework and that was supposed to be completed in early fall. However, Canadians will be going to the polls Sept. 20.

“There could be some policy direction that might limit the number of options that are available to us, if the government legislated specific technical options for instance. But it wouldn’t necessarily change a lot of what we're asking people… Those concerns and those considerations will be the same regardless of the policy direction,” she said.

The NWMO has met with the First Nations Power Authority, the Assembly of First Nations, the Algonquins of Pikwakanagan, and the Wolastoqey Nation of New Brunswick. A meeting is planned with the Pabineau First Nation, N.B., and workshops are being arranged with the Grand Treaty Council #3, the Association of Iroquois and Allied Indians, Federation of Sovereign Indigenous Nations, and Sagkeeng First Nation.

Glenn says other Indigenous organizations have been contacted, as well as Treaty 6 chiefs, the Treaty 8 First Nations and the Métis Nation of Alberta.

Glenn expects engagements to conclude by October or November.

“When we’re talking about long-term management of waste we're talking into the hundreds and thousands of years. We want to make sure we get it right and we need to hear from as many people as possible,” said Glenn.

The Indian Resource Council (IRC) has not been approached about the virtual consultations, says Larry Kaida, assistant to the president.

IRC, headquartered in Tsuut’ina Nation, represents about 140 First Nations who have produced oil and gas in the past, are producing now or have the potential to produce.

“The IRC is now looking at all forms of energy so long as there are benefits/opportunities for First Nations. We would, of course, be very cognizant of environmental issues and impacts. We are well placed to coordinate meetings, provide the right information, but leave it to First Nations to decide if interested,” said Kaida in an email to Windspeaker.com.

Any Indigenous communities that wish to organize a workshop or forum, can reach out to info@radwasteplanning.ca.