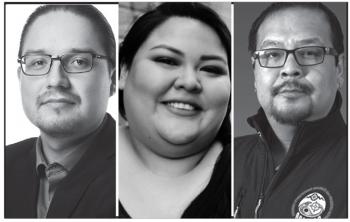 “There’s always this level of anxiety, this level of uncertainty when he makes these announcements, how they will actually translate to a difference on nations themselves for grassroots people.” —Grand Chief Billy Morin on funding supports announced by Prime Minister Justin Trudeau
By Shari Narine
Local Journalism Initiative Reporter
Windspeaker.com

Whether it’s federal or provincial funding for coronavirus measures, First Nations believe that they’re not getting the priority attention they need.

“We’re kind of like an oversight for all of that,” said Courtney Skye, a research fellow with the Indigenous think-tank Yellowhead Institute.

She points to school and child care funding allotted by Ontario to parents as an example. The Ford government announced in April that every family would receive a one-time payment of $200 per child under the age of 12 to offset the cost of home school supplies. The funding, initially, was not available to kids who attended First Nation schools on reserve, said Skye, a member of Six Nations of the Grand River.

First Nations often find themselves caught between provincial and federal jurisdiction, so it didn’t surprise her that First Nations had to lobby to have on-reserve schools included in the Ontario program.

“People easily understand on a theoretical level that First Nations people experience systemic discrimination, but they don’t recognize the way in which that discrimination is maintained in policy and service development… so (governments) aren’t making these decisions proactively that are ensuring that First Nations people are included,” said Skye.

In late April, federal Infrastructure Minister Catherine McKenna announced that $182-bllion of existing money in the budget for infrastructure projects would be rushed out as a means to kick-start the economy. First Nations once more found themselves caught between government silos.

“We thought ‘this is great’. First Nations people would be entitled to $9-billion at minimum. Now we’re finding out First Nations might have to go to the provinces to access this infrastructure money,” said Manitoba Regional Chief Kevin Hart, who serves as co-chair of the Assembly of First Nations’ COVID-19 national task force.

“I made it adamantly clear that was wrong and the federal government had a nation-to-nation relationship with First Nations people in Canada based on treaties signed. I reminded them that the economy was built on the lands the treaties were signed upon.”

However, First Nations face a similar situation for $1.7 billion promised in April by Prime Minister Justin Trudeau to clean up orphaned and abandoned wells in Saskatchewan, Alberta and British Columbia.

“First Nations are owed a portion of the orphan well fund and relief that the federal government announced and that’s one we’re trying to aggressively pursue,” said Treaty 6 Grand Chief Billy Morin.

Morin, who is also chief for Enoch Cree Nation, says his First Nation has 200 orphaned wells. However, because wells on reserve fall under the federal program Indian Oil and Gas, they are not included in the mandate that sees federal funds allocated to provinces to clean up wells. He points out that many of the lessees on the First Nation are Alberta oil and gas companies.

“We’ve talked to the federal government and we’re trying to tell them before they float any more money to the provinces they need to acknowledge First Nations, to give us our portion, because we feel we’re going to be left behind again in the clean-up of these orphan wells,” said Morin.

Morin has high praise for the initial $300 million rolled out for First Nations by Ottawa at the start of the COVID-19 pandemic. He said that money came with few stipulations and allowed First Nations to use it as they deemed fit.

“Beyond that, the small business loans, the large employment emergency funds, the lack of other communication and supports for infrastructure needed for First Nations has woefully fallen short,” he said.

Morin said it was unclear when the Canada Emergency Relief Benefit was announced whether First Nations people qualified, so those who lost their jobs were encouraged by the band to apply for employment insurance with the band topping it up. Enoch’s band employees working in the public service did not qualify for the wage subsidy program, which saw the federal government cover 75 per cent of employees’ wages.

About two to three weeks after the wage subsidy program was announced, it was determined that First Nations businesses did qualify, so the 100 or so staff remaining at the River Cree Resort were kept on the payroll through the wage subsidy.

“When we go to the market to get liquidity, quite frankly, we are charged higher interest rates simply for being First Nations because they see us as riskier. It is extremely frustrating,” said Morin.

While Trudeau’s latest announcement of support for First Nations at $270 million to supplement the On-Reserve Income Assistance program has been welcomed by leaders, details are sparse.

“There’s always this level of anxiety, this level of uncertainty when he makes these announcements, how they will actually translate to a difference on nations themselves for grassroots people,” said Morin.