First Nations must be included in Canada’s recovery plans as country emerges from pandemic, say candidates 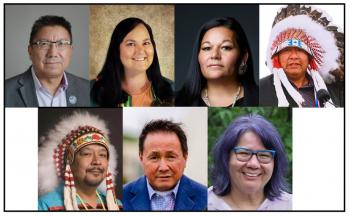 “This pandemic has changed the way that we socialize, changed the way that we interact. We need proper resources and services to make sure that our people can emerge from the pandemic and rebuild their emotional and mental strength so that we can move forward in a good way.” — RoseAnne Archibald
By Shari Narine
Local Journalism Initiative Reporter
Windspeaker.com

First Nations must be top of mind for the federal government as Canada moves out of the COVID-19 pandemic, say the seven candidates running for national chief of the Assembly of First Nations.

“Coming out of the coronavirus we need to be part of rebuilding Canada’s economy. We need to be included as … equal partners at the table. We need to be sitting at those decision-making tables for all sectors,” said Dr. Cathy Martin.

Martin, an elected member for the Listuguj Mi'gmaq Government for three terms, says the AFN’s role is to be “that of support”. Consultation with the federal government, however, must be done at the grassroots level and if that means with all 638 First Nation communities across Canada “then that's what needs to be done.”

Reginald Bellerose, former chief of the Muskowekwan First Nation, Sask., points to an economy that is changing and moving away from the brick and mortar business model of pre-COVID-19 towards a strong digital presence.

“First Nations need to get into that market. One of the areas that's becoming very important (in communities) is the lack of connectivity,” he said.

That lack of connectivity became abundantly clear as northern and remote First Nations children found themselves disadvantaged as classes moved online when schools were closed in order to fight the spread of COVID-19, he said.

“We've got to get our communities connected. The AFN’s role is to play a supportive role, a facilitating role, helping to understand the lobby effort that's going into all of this rebuilding of the Canadian economy,” said Bellerose.

“It's rebuilding and (First Nations) need to be right in there, not an afterthought,” he said.

Many First Nation leaders expressed concerns when the pandemic first hit and the federal government started rolling out economic and personal support packages in March 2020.

Later, $305 million was set up in an Indigenous Community Support Fund, part of a much larger $27 billion initiative from the federal government in direct support to Canadian workers and businesses.

The Indigenous fund initially offered no details or clarity as to how the money would roll out. It only provided a promise to deploy “modest emergency funds” until a formula could be established. There was also no guarantee that more money would be coming if the pandemic continued.

First Nations again found themselves left behind last year when Ottawa announced funding for the remediation and reclamation of orphan wells in the western provinces.

When $182 billion in federal infrastructure was given to the provincial governments, First Nations once more had to access those dollars through the provinces.

It was a battle that former Manitoba regional chief Kevin Hart fought as co-chair of the AFN’S COVID-19 national task force.

“We have many First Nations whose businesses do not fall under regular $180 billion announced in stimulus to regular Canadians. I'm going to fight to ensure that those economic benefits and stimulus are entitled to our First Nation people as well,” said Hart.

He says this work will be part of his 100-day action plan if he wins the election.

Nishnawbe Aski Nation Grand Chief Alvin Fiddler says his “recovery framework” will address the post-pandemic needs and adds, “I envision the national organization, the AFN, to be able to support the work of our communities, making sure they have financial resources first of all to do the work.”

A recent survey released by a group of Indigenous economic organizations indicates that 72 per cent of the 825 Indigenous businesses that responded said they needed more financial support.  However, 42 per cent said they did not apply for government programming because they needed grant support and not loans, because they were unable to take on additional debt. The data was collected between mid-December 2020 and February 1, 2021.

Fiddler points out that the work AFN has to facilitate is not limited to economics. The pandemic has taken a toll on the mental health of children and families, he said.

Former Ontario regional chief RoseAnne Archibald said that as an advocacy organization, the AFN should support First Nations as they build their economies coming out of the pandemic and tackle the increase in mental health and addictions that have come to the forefront.

“The AFN needs to be a space for resources to support our chiefs. That we are making sure every resource is available that they can connect with. We know that this is a critical time in recovery,” said Stonehouse, who is a councillor with the Michel First Nation in Alberta.

Former Tsuut’ina Nation Chief Lee Crowchild emphasizes the medicine chest clause in Treaty 6 and the famine and pestilence clauses. A 2018 submission by the Maskwacis Cree to the United Nations’ Expert Mechanism on the Rights of Indigenous Peoples states that the medicine chest clause is “understood as providing a guarantee of all health care services, delivery, medicines, and supplies as required by Indigenous peoples;” while the famine and pestilence clause is “understood as providing a guarantee of appropriate and expedient support … in the face of famine or pestilences … such as chronic diseases, outbreaks, epidemics and other similar health matters.”

“We have to always remind the government of what their responsibilities are …  (and) under treaty they have an obligation… they have a responsibility to us,” said Crowchild.

He gives credit to the First Nations who have demanded vaccines and have been “really pragmatic” about their approach in dealing with the coronavirus, which has included erecting checkpoints and implementing curfews.

Right now, an emergency situation on the Kashechewan First Nation “shows more work needs to be done,” said Hart. “There’s still a whole lot of unknowns when we talk about COVID-19.”

Chiefs will vote virtually for the next national chief of the AFN on July 7. Present National Chief Perry Bellegarde is not seeking a third term.