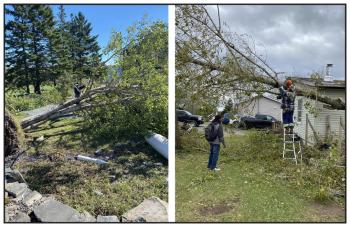 Trees were downed in First Nations communities on the East Coast after storm Fiona blew across the region. Communication issues are hampering efforts to coordinate clean-up in some territories. Photos courtesy of Cheryl Gehue, a councillor from Sipekne’katik First Nation

“You have to figure out food storage. Gas is a major concern as well. There’s long lines for gas and some gas stations are not open at all.” — Assembly of First Nations Regional Chief Paul Prosper
By Sam Laskaris
Local Journalism Initiative Reporter
Windspeaker.com

The storm has passed.

But work has only just begun for Assembly of First Nations Regional Chief Paul Prosper.

Prosper, who represents 17 First Nations in Nova Scotia and Newfoundland, spent a good chunk of his weekend trying to get some preliminary reports on how much damage the storm Fiona inflicted on First Nations territories on the east coast.

“It’s pretty bad,” Prosper told Windspeaker.com on Sunday. “There’s a lot of trees down in our community and in other communities. And the power is out. I don’t know when we’re going to get power back. Generally, there are a lot of trees throughout the province.”

Without electricity, gas shortages were expected to become a problem as well.

But Prosper said on Sunday he had enough gas to leave his own First Nation of Paqtnkek Mi’kmaw Nation in Nova Scotia to travel to Millbrook First Nation, about 150 kilometres away. Better cell reception was available there and he could make the phone calls necessary to check in on the First Nations in his coverage area.

Prosper said he had not yet been in touch with officials from Eskasoni First Nation, which was reportedly one of the hardest hit communities and had declared a state of emergency.

“Communication has been a challenge with them,” Prosper said of Eskasoni.

Prosper said he had been doing his best to get in touch with officials from all First Nations that he represents.

“We’re talking with leadership as they’re doing things,” he said. “But I’m sure my call isn’t the only one that they’re getting.”

Canada’s five eastern provinces were all impacted by Fiona after it started slamming the country on Saturday. The storm swallowed up numerous homes in coastal communities and wind gusts, reportedly reaching 170 kilometres an hour, caused extensive damage.

Fiona is believed to have been responsible for two deaths in Canada.

Prince Edward Island officials announced on Sunday that one person had died, but the cause of death was not revealed. It was reported the death may be attributed to a generator issue.

The storm also caused the death of a 73-year-old woman from the Newfoundland town of Port aux Basques. Her home was hit by a massive wave, which caused extensive damage to the community. Her body was recovered from the ocean.

Prosper was anticipating a hectic work week, starting Monday morning. He was expected to have meetings with both provincial government officials and First Nations reps.

“I need to help co-ordinate things and try to be of assistance to (First Nations) leadership,” he said. “I’m working on coordinating with leadership to provide for their communities.”

He said when the power goes out “there’s some attention needed to food resources.

“And you have to figure out food storage. Gas is a major concern as well. There’s long lines for gas and some gas stations are not open at all.”

Prosper said he’s hoping his meetings at the start of his work week will give him a better indication of what needs to be done.

Cheryl Gehue, a councillor from Sipekne’katik First Nation in central Nova Scotia, also had plenty of concerns to deal with on the weekend.

But Gehue said her community, located inland and in the central part of the province, was not as severely impacted as others from the storm.

“We’ve had a lot of rain and we’ve been cutting down trees that landed on homes,” Gehue said.

She said the majority of those members of the First Nation who live on reserve were showing up at the community centre for meals during the weekend.

Gehue said First Nations members were able to quickly mobilize themselves as they had prepared in advance for the storm.

“I think because of our lessons learned from Juan, people had prepared for the next 72 hours,” Gehue said.

Hurricane Juan, which landed in eastern Canada in September 2003, resulted in eight deaths and caused more than $300 million in damage.

Juan was described as the worst storm to hit Halifax since the late 1800s.