First Nation player will be on defence at PyeoneChang, South Korea 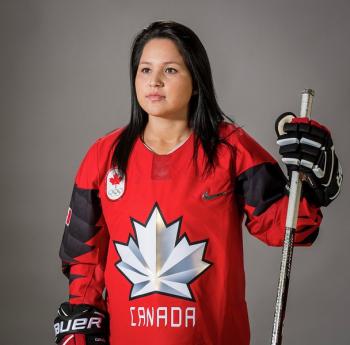 And the 25-year-old is hoping to add an even more impressive medal to her collection next month.

Lacquette already knows she will be making a bit of history. She is the first First Nations person to be named to the Canadian women’s Olympic hockey team.

This year’s Winter Olympics, which run Feb. 9 to Feb. 25, will be staged in PyeoneChang, South Korea.

Lacquette, who plays defence, was officially named to the Canadian roster in late December.

Since then Lacquette has been receiving tons of congratulatory messages and praise for being a role model for other female Indigenous athletes in Canada.

“I’ve been getting a lot of social media messages,” Lacquette said in a conference call on Tuesday with journalists from across the country. “I’m excited to be that person for First Nations girls across Canada. I want to be that person for them and to let them know it doesn’t matter where you’re from you can achieve your dreams.”

Lacquette is from the tiny Manitoba community of Mallard. If that’s not a place you’ve heard of, you’re probably not alone.

“It’s in the middle of nowhere,” she said. “It’s about four hours north of Winnipeg. And there’s only about 50 people there now. There’s not even a school there. Growing up we had to be bused to the nearest community.”

While Lacquette will become the first First Nations female on the Canadian women’s hockey squad, it should also be noted that the club also includes national team veteran Jocelyne Larocque, who is Métis.

Larocque, 29, who also plays defence is from Ste. Anne, Man. She will be making her second Olympic appearance.

Larocque had helped Canada capture the gold medal at the 2014 Sochi Olympics in Russia.

Lacquette had also come close to competing in the 2014 Olympics. She had centralized with the Canadian squad in the year leading up to those Games. But she was one of the final cuts of the club and did not get to compete in Sochi.

Lacquette’s father Terrence, who is from Mallard, is First Nations. And her mother Anita is from Saskatchewan’s Cote First Nation.

As for Lacquette, she’s thrilled she’ll not only represent Canada in South Korea, but all Indigenous athletes as well.

“I’m super excited. Having all that support from First Nations across Canada is extra special for me,” she said.

And no, she doesn’t believe that honor carries any additional burden.

“I don’t think it’s extra pressure,” she said. “I just go in there and focus on my game and my team.”

Canada will kick off its Olympic women’s hockey schedule on Feb. 11 with a game against Russia.

Lacquette believes that initial contest will be special for her.

The Canadians will also play two other preliminary-round contests, Feb. 13 versus Finland and on Feb. 14 against their perennial rivals, the United States.

Japan, Sweden, Switzerland and host South Korea will also be participating in the women’s hockey competition.

Regardless of their preliminary-round results, all eight squads will advance to the tournament’s quarter-final rounds.

No doubt Lacquette and her teammates will be hoping to advance to and win the gold-medal match, set for Feb. 22.

As a member of the national team, Lacquette already owns two silver medals from the women’s world championships in 2015 and ’16.

She also won a gold medal at the 2010 world women’s under-18 tournament and a silver medal in that global event in 2009.

Lacquette, who played her college hockey at the University of Minnesota-Duluth, also plays for the Calgary Inferno, members of the Canadian Women’s Hockey League (CWHL).

Though her national team commitments have prevented her from suiting up with the Inferno thus far this season, Lacquette did help her squad win the CWHL championship in 2016.

Lacquette said she has overcome various obstacles to get to where she is today. For example, she said she was bullied when she was younger. And then she faced her share of racism when she travelled to bigger cities during her hockey pursuits.

Her father, who was often her coach, assisted during those times.

“He was always there to encourage me,” she said.

Lacquette has also looked up to her older sister Tara for support. The elder Lacquette, a former hockey goalie, suited up for the University of Manitoba women’s team earlier this decade.

“She’s still there for me,” Lacquette said of her sisterly support.

Tara Lacquette, however, will not be able to travel to the Olympics to cheer on her sister. That’s because she is currently a nursing student in Brandon.