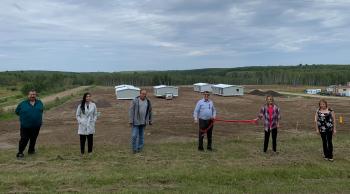 Six of 10 new homes have been delivered to the Elizabeth Metis Settlement in Alberta for families with young children. Photo courtesy of Indigenous Relations

“Lack of housing is a huge deal. A lot of people want to live here but many have nowhere to go in a place they call home.” — Kathy Lepine
By Travis Klemp
Local Journalism Initiative Reporter
Windspeaker.com

A recent grant comprised of federal and provincial contributions has brought new homes and job opportunities to the Elizabeth Metis Settlement.

As part of an affordable housing initiative, the settlement, located about 36 kilometres south of Cold Lake, Alta., has received six of 10 new four-bedroom homes, with the other four under construction by Nails Enterprises in Cold Lake to be shipped to the settlement before winter.

The one-story homes will house 10 families with young children. All of the homes contain a large gathering space similar to a living room, but more open for larger family gatherings, which are part of the Métis culture dynamic.

Kathy Lepine, an elected council member and chair of the housing authority on settlement, says that it is integral to give these young families the opportunity to raise their kids in the community.

“There will always be the option to leave the community and live somewhere like Cold Lake, but we need to make sure that they have the chance to stay here; to have their own home and go to school in our schools,” said Lepine.

While Lepine says that having family close and raising children with aunties and kookums to help care for the kids is important, the over-crowding on settlement is just too much.

“Lack of housing is a huge deal. A lot of people want to live here but many have nowhere to go in a place they call home. We needed to do this. It was an avenue for us to keep our young people.”

Through the Canada-Alberta bilateral agreement under the National Housing Strategy, a $2.91 million contribution has been made. This includes a $153,000 Elizabeth Metis Settlement land contribution, which was used for the housing.

In addition to the housing itself, Lepine says there has been significant job creation for the Métis people on settlement and in the surrounding area.

“Through the agreement with Nails, there was a lot of work for our people. Whether it be plumbers, electrical, construction or learning from the certified carpenters, many people were learning new skills and getting employed.”

Alberta Minister of Indigenous Relations, Rick Wilson, said it is important to provide services like job creation and other tangential opportunities for the community members.

“They created about 21 jobs getting it done. Plus, the training for the young folks who are interested in getting into trades. I am always knocking on the door of Seniors and Housing to see what kind of funding we can get to communities,” Wilson said.

“Everyone has such pride in their community and it is great to see them getting involved with the project,” said Wilson, who added that overcrowding in many communities is a major issue.

“Housing is so critical, especially now with the pandemic. Having multiple families under one roof can influence a spread of the virus.”

Minister Josephine Pon of Seniors and Housing, the ministry associated with the grant process for the funding, said that the redesigned Indigenous Housing Capital Program will offer flexibility and autonomy for Indigenous communities to build affordable housing.

“We have expanded the types of housing units eligible for funding, and Indigenous proponents will have more autonomy to manage their housing assets,” Pon said in a press statement.

Lepine says that she has her eye on grant funding for the seniors at Elizabeth Metis Settlement next. She says that seniors, who are so crucial to the Metis community, are being forced to seek accommodation in senior facilities outside of Elizabeth.

“Lots of our seniors, if they have some kind of health issues and they need help, we have no services for them here. They get sent out to local areas and they end up coming back in a coffin. We need to change that.”

Lepine says that Elizabeth Metis Settlement intends to have all of the families moved into their new homes before winter and is very grateful for the funding that has given community members the chance to raise their kids in their own Metis community.

Local Journalism Initiative Reporters are supported through a financial contribution made by the Government of Canada.