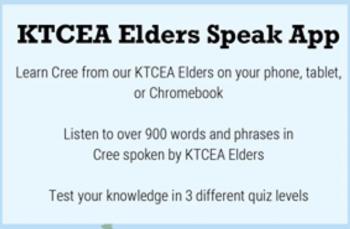 “Land-based learning is the corner stone of who we are in KTCEA. Our communities are still so tied to the land. They still hunt, they still fish, they still trap.” — Dr. Daphne Mai'Stoina
By Shari Narine
Windspeaker.com Contributor 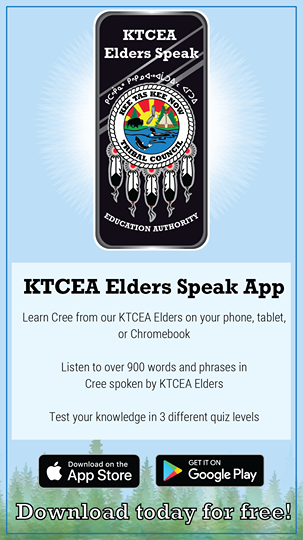 The app has been in development since 2016 when funding was received from the federal government and then the province. Audrey Anderson was lead on the app’s development.

KTCEA Elders Speak includes more than 900 words and phrases with over 50 categories chosen by the Elders. Three levels of tests allow it to serve as an educational resource for the K-12 curriculum.

While the app is specific to these five Cree First Nations, when it was launched on Jan. 14 on the KTCEA website and Facebook page, it received more than 20,000 views in the first 24 hours.

“It’s been shared across Canada,” said a thrilled Anderson.

The process was a long one and included more than 100 meetings when the work officially got underway in 2017. It involved Anderson building rapport with the Elders and also feeling comfortable with the language herself. Initially a translator was used to guide the English-Cree discussions, but soon Anderson was remembering her language and working without a translator.

Before Anderson met with the Elders, she researched available language apps. She came across a Blackfoot language app developed by the Old Sun Community College in Siksika Nation. With the help of Vivian Ayoungman from Siksika, the concept of a language app was explained to the Elders and Ayoungman provided advice for the Cree language app.

“Once our Elders understood that the app could be seen by the world and used as a teaching tool in the schools, they began working and selecting all of the categories that they wanted their children to learn,” said Anderson.

In developing the app, Elders had an opportunity to reacquaint themselves with Cree words they no longer used.

“A lot of it was revitalization. A lot of ah-ha moments. ‘I forgot about that word.’ The richness of it is a lot of our Elder culture of the nation, a lot of our culture is embedded in the language and a lot of family groups have different ways of saying things because our language is so descriptive,” said Anderson.

Even within those five First Nations the Cree dialect varies. Anderson points to words like “brown” and “cinnamon bear” noting they are spoken in different ways by nations that are “only half-an-hour apart from each other.”

The app not only shares language, it also shares community history.

In keeping with the land-based approach used in the six schools operated by KTCEA, much of the Cree vocabulary on the app applies to living off the land.

“Land-based learning is the corner stone of who we are in KTCEA. Our communities are still so tied to the land. They still hunt, they still fish, they still trap. It’s still a big part of them as families,” said Mai'Stoina.

“There’s a lot of teaching that happens in (living off the land) so we know that we can tie a lot of learning into that. And the Elders didn’t want the students to lose that part of who they are. That was why we knew that land-based learning had to be tied into everything we do, including the language.”

Mai'Stoina says principals and teachers have started to use the app noting that all the Cree vocabulary can be tied into the K-12 curriculum.

“KTCEA was very honoured to have this privilege of working with the Elders and they were so open to sharing and we respect that and honour that,” she said.

Anderson says there are future plans to expand the vocabulary categories on the app.

“We want our app to be a living teaching tool,” she said.

The official launch of the KTCEA Elders Speak Cree language application will happen shortly with a community celebration.

However, the app is available now for free on the Apple App Store and Google Play.