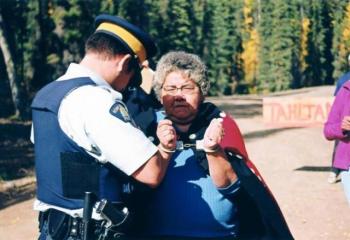 The Klabona Keepers will screen at the Vancouver International Film Festival which opens Sept. 29.

“This was won by a group of Elders, old ladies, a couple of old men… When you think about them, you think of them as cute old Elders. And then these guys come up on our doorstep, and then they’re the scariest people you’ve ever seen.” — Robert Jakesta
By Crystal St.Pierre
Local Journalism Initiative Reporter
Windspeaker.com

This was one of the many messages written on signs that members of the Klabona Keepers and the Tahltan Nation displayed during their long fight to block mineral extraction and the impacts of multi-national industral development at the sacred headwaters known as the Klabona, located in northwest British Columbia.

For 15 years, Elders and members of the Tahltan Nation near Iskut, fought to protect the headwaters of the Stikine, Nass and Skeena Rivers.

The Klabona Keepers was a matriarch-led group comprised of Elders and their supporters who held blockades and protests in an effort to stop developments that would endanger the territory.

“This was won by a group of Elders, old ladies, a couple of old men… When you think about them, you think of them as cute old Elders. And then these guys come up on our doorstep and then they’re the scariest people you’ve ever seen,” said Robert Jakesta, who grew up watching his family and community fight for their land on the blockades.

Jakesta was only 10 years old when he started attending the blockades with his family during the summer months.

For example, when his grandfather, who was in a wheelchair, was arrested, he refused to be wheeled down the road to the police car. Although he could barely walk, he stood up and slowly made his way to the vehicle.

“I went behind a structure and was bawling my eyes out,” said Jakesta. “One of the biggest things that this fight has put inside of me is that you live by a moral code and integrity. No amount of money or anything, anything, is important enough to give up your own moral beliefs and integrity.”

Jakesta is one of the community members featured in the Klabona Keepers documentary to be showcased at the Vancouver International Film Festival, running Sept. 29 to Oct. 9, 2022.

Tamo Campos, director of the film, had spent many years filming the blockades for media.

He said it wasn’t until after the victory when Elders and members of the Klabona Keepers approached him did he begin to create the documentary.

“The Elders brought it up because they had so much footage,” Campos said, adding they had asked him if he would tell the “deeper story” because of all the footage he had acquired during his time with them.

He recalls how the community originally welcomed him in from what was supposed to be a quick stop for ice cream during a road trip to another job.

He ended up attending a music festival there, and then was invited to attend the blockades.

“The film, in many ways, was… is really just a love letter for the community that had taken me in about a decade ago and it was really just a way to honour those relationships,” he said. “And really share the story that was really inspiring to me, and I think will be inspiring to a lot of other people. What these families were willing to sacrifice and just their dedication to fight for an area that should be sacred to all of us.”

In creating the documentary it was important to Campos that it wasn’t just his version of the events that took place, so he requested Rhoda Quok to produce the movie alongside him.

“It was very collaborative. We filmed over eight years. We had older filmmakers with some of the footage with roots to the community,” he said. “They all contributed footage to round off the story.”

Quok, who is also Jakesta’s mother, was the leader of the Klabona Keepers during the blockades.

“She’s from the community so she was a huge part in teaching us about that process and how to do this work in a good way,” Campos said.

“There was this whole process of really working with stories as they are sacred and special themselves, and making sure they are taken on with a lot of responsibility to the people within it, rather than just the means and the goals with why you are putting the story out,” he said.

“Documentaries have such an extractive history in stealing stories from Indigenous communities, and so when you’re doing, especially with this film, it’s a film about the extraction of the land. How do you make sure you are not replicating that same process through story telling. That is something that we spent a lot of time thinking about,” Campos explained.

Another aspect Campos was passionate about was that he wanted the story and the film to stay within the community and so the ownership of it is to be with them.

“We structured it so that Klabona Keepers own the film and they’ve decided with that they want all proceeds to go to youth programs in the sacred headwaters area,” he said.

“Not only do I think it will it be an inspiring story for folks who watch it but there is a solid aspect where it continues to give to a community that fought so hard for that area.”