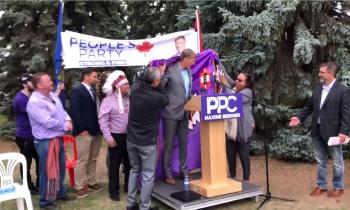 Maxime Bernier, leader of the Peoples Party of Canada, was blanketed at the direction of Chief Calvin Bruneau of the Papaschase First Nations by Pastor Deborah Minoose.

“You’re wishing people well and all that. That’s why we do this, why we give blankets. It’s a way to honour and respect and wishing them well.” — Chief Calvin Bruneau, Papaschase First Nation
By Shari Narine
Local Journalism Initiative Reporter
Windspeaker.com

Updated Sept. 14 at 6:45 a.m. (ET) with an email statement from Darlene Misik, also claiming to be the Papaschase First Nation chief.

The blanketing of Peoples Party of Canada leader Maxine Bernier this past Saturday in an Edmonton park does not mean support of the right-wing party by the Papaschase First Nation.

“It’s my traditional land and territory… I decide who I welcome in and don’t, and if I’m asked by people within that party (to welcome Bernier), they asked me to, that’s proper protocol,” said Chief Calvin Bruneau.

Bruneau had Pastor Deborah Minoose, president of the Aboriginal Ministries Association of Alberta, wrap Bernier in a blanket after the federal party leader introduced his Indigenous peoples platform.

Bernier was accompanied by the PPC’s four Indigenous candidates, which include Murray McKinnon, who’s running in the Sturgeon River-Parkland riding in Alberta.

For two terms McKinnon (Métis) held one of two seats open to Métis and non-status First Nations on the Papaschase band council. McKinnon had asked Bruneau to do a blanketing.

Bruneau said if any other party leader had approached him when they were on the campaign trail, he would have welcomed them with a blanket as well. Bruneau points out that leaders Jagmeet Singh (New Democrats), Justin Trudeau (Liberals) and Erin O’Toole (Conservatives) had all made appearances in Edmonton.

“You’re wishing people well and all that. That’s why we do this, why we give blankets. It’s a way to honour and respect and wishing them well,” said Bruneau.

In a telephone interview with Windspeaker.com after the event, Bruneau insisted he is not supporting the PPC or any other party, as he has to work with whoever forms the next government.

However, on the day of the event, Bruneau said to the highly-vocal crowd gathered, “We share the same ideas and principles about freedom. Over 150 years we’ve been fighting for our freedom. We’ve lost it, so we’re in this with you guys.”

His pronouncement was answered with the chant of “freedom.”

Windspeaker.com also asked Bruneau about a comment made by Yeo to send the Armed Forces into First Nations to dig water wells as a means to deal with long-term boil water advisories. About 50 water advisories remain with approximately 109 addressed by the Liberals over the past six years.

Yeo, who has served in the Canadian Armed Forces, as well as with the United Nations Peacekeepers and NATO Coalition Partners, said he would “personally oversee this operation once in the House (of Commons).”

“I’ve been in Afghanistan. I’ve been in war zones, and there’s no question that we create this environment over there and then we bring in provincial reconstruction teams. These provincial reconstruction teams rebuild roads, they rebuild houses, they rebuild schools and, guess what? They rebuild water … They drill the wells for the water, put in the pumps and they provide fresh water for their local communities in Afghanistan. Why can’t we do it here in Canada?” said Yeo.

“The army can’t just walk in—I guess they can—but you’ve got to work with the First Nations. You can’t just go in there and start digging wells,” said Bruneau.

The PPC’s Indigenous issues platform is scant on details and is subtitled with the four principles Bernier says drive his party: respect, freedom, fairness and responsibility.

“If our conversations with Indigenous nations, communities and individuals are guided by those four principles we will do well,” said McKinnon.

“Indigenous issues are very complex. It is not possible to address more than a few of them in the context of this election platform,” said Bernier at the rally.

“A PPC government is committed to seeking options to replace the paternalistic Indian Act, which keeps Indigenous people in a state of dependency and allows the federal government to control most aspects of their lives,” he said.

“We’re actually voting for our freedoms, so choose wisely,” said McDonald, who was born and raised on the Kikino Métis Settlement.

Bernier said his party has strong support in Alberta and he anticipated “some of our candidates can win here,” adding that neither the Liberals nor NDP would pick up any seats.

At the time of the election call, Alberta’s 34 seats were all Conservative with the exception of Edmonton Strathcona, which was NDP.

The CBC poll tracker, which amalgamates polls across the country, indicates the PPC has almost nine per cent of the popular vote in Alberta, with the Conservatives at 50 per cent and the Liberals and NDP with approximately 18 per cent each.

Bernier also said the Conservative Party is “only conservative in name so we are the only party that will be ready to fight for western Canadians and all the country.”

The PPC did run candidates in Alberta in 2019.

After the rally, Darlene Misik, also claiming to be the chief of the Papaschase First Nation, issued a news release condemning Bruneau’s decision to blanket Bernier.

“This rally was both a political and religious presentation that was completely unauthorized by our people,” said the release.

“I assure you we are taking the appropriate action to address (Bruneau’s) behaviour.”

In an emailed statement to Windspeaker.com, Misik, elected on Aug. 30 according to her group's Facebook page, wrote “It was not so much the blanketing itself which was disturbing. It was the endorsement for a political party at a political rally which was done without the approval of our people and with a Christian organization (Aboriginal Ministries of Canada).”

Misik said Bruneau was re-elected in September 2019 in a “sham election which the Elders did not approve of.”

She added that she held off on her “legal election” until a lawsuit Bruneau had against seven of the Papaschase descendants had been resolved; it has since been resolved.

According to Bruneau, he was elected chief for the first time in 2011 and has won two more successive elections. He said Misik held an “illegal election” and does not speak for Papaschase First Nation.