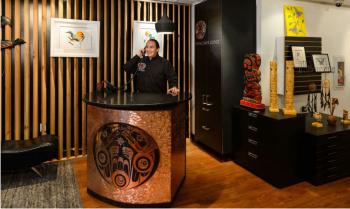 Artists are required to put in minimal hours working in the Skwachàys Lodge art gallery.

Skwachàys Lodge has been selected the recipient of the $100,000 Social EnterPrize biennial award from the University of Calgary’s Haskayne School of Business and the Trico Charitable Foundation.
By Shari Narine
Windspeaker.com Contributor

“Serendipity” is the word David Eddy uses when he talks about the awards Skwachàys Lodge has received.

“Over the years there’s so much serendipity attached to the project in total—the hotel, the gallery, and the artist residence program—that nothing surprises me anymore,” said the CEO of the Vancouver Native Housing Society, which operates the lodge along with 18 other social housing buildings in Vancouver.

Skwachàys Lodge is a hotel and gallery in downtown Vancouver that through its own income—and no government funding—subsidizes the cost of 24 studio apartments that provide homes to Indigenous artists.

It’s for this endeavour that Skwachàys has been selected the recipient of the $100,000 Social EnterPrize biennial award from the University of Calgary’s Haskayne School of Business and the Trico Charitable Foundation.

In 2009, the Vancouver Native Housing Society board decided to create a social enterprise so that government funding would not be necessary for subsidized housing. After an analytical process, the decision was made to help Indigenous artists with accommodation through a hotel and gallery, explained Eddy.

The artist-in-residence program has strict guidelines that artists must follow. Artists are required to have a three-year work plan. Tenancy is renewed every six months up to a maximum of a three-year consecutive term.

“If somebody’s not living up to their program goals, we will not renew the tenancy,” said Eddy. “Our goal is to help folks with their personal and professional development and try as much as possible to make them market ready, to make them ready to move into market accommodations, to make them ready to open their own business, that sort of thing, and we feel like people need parameters.”

Accommodations are subsidized with artists having to pay only $375 monthly. Artists must also work minimal hours at the hotel’s art gallery.

Coming off a difficult personal relationship, he made the decision to focus on his career. He was visiting a friend, who was an artist-in-residence at Skwachàys. She recommended that he apply to the program and, at an artists’ Christmas party, she introduced him to the residence program manager and Eddy. It all fell in to place. On March 1, 2017, he moved into the lodge.

“I was already established as a Coast Salish artist, but I wanted to move my career to the next level,” said Johnny.

With three months left in his three-year residency, Johnny is confident that he has accomplished that goal.

“People know my work but they didn’t really know me. So I think that was a good way to get people to actually get to know me as an artist. I find when people know you as an artist sometimes that sells a piece out of nowhere,” he said.

His sales have picked up and he now has a three-month waiting list for orders.

Johnny discovered the importance of building relationships with museum and gallery managers. With art shows booked two or three years in advance, he says it’s important for those managers to understand his dedication and work ethic.

He has also built connections through other artists. Johnny served on the committee for Vancouver Indigenous Fashion Week, an initiative of former Skwachàys Lodge’s artist-in-resident Joleen Mitton. That has opened doors.

Mitton is the founder of the event, which runs Nov. 18 to Nov. 21 at the Orpheum Theatre and Queen Elizabeth Theatre. Vancouver Indigenous Fashion Week showcases Indigenous fashion along with issues such as murdered and missing Indigenous women and girls, and the foster care system. Many of the models and production crew grew up in care.

“It’ll be a huge benefit to be part of something so prevalent, something that, especially today, it’s so important to build that bridge between Canadians and Indigenous people,” said Johnny.

Johnny plans to stay in Vancouver after his residency at Skwachàys Lodge. He admits accommodations and studio space won’t be cheap, but he thinks it’s the right move for him. He is able to make a living as an artist, something he wasn’t able to do three years ago. While now he can afford Vancouver rent, he’s hoping to increase his monthly income by $2,000 or $3,000, which would mean he’s not living pay cheque to pay cheque.

“It’s been a huge asset for me to have this program, to be able to be in the hub of the art world in Vancouver and be able to make these connections. I really enjoy it here and I’d like to keep that going for the next two years at least,” he said.

What Johnny has been able to accomplish, says Eddy, is what the artist-in-residency program is all about.

Eddy says that the subsidized housing for the artists is fully covered through the hotel and the gallery. The hotel, which is billed as “accommodations for the ethical traveller,” operates at 85 per cent capacity, with May through October fully booked.

Travellers who choose Skwachàys Lodge because of its low price or convenient location, buy-in to the social enterprise aspect of the accommodations. Corporations also book accommodations at the lodge.

The lodge employs about a dozen people in the neighbourhood, most of whom are Indigenous, and about $100,000 of art, such as jewellery and carvings, is purchased annually from off-the-street artists. The lodge also purchases from Indigenous companies.

Eddy points out that Skwachàys Lodge has received certificates of excellence over five consecutive years from Trip Advisor and, because of that, this year it is recipient of Trip Advisor’s Hall of Fame award. The lodge was also singled out in 2018 by Time magazine as one of the 100 Worlds’ Greatest Places. It was the only Canadian location to be included on the list.

“It just keeps coming,” said Eddy of this latest award. “Skwachàys Lodge ticks so many boxes, especially in the social enterprise world because I think sometimes some social enterprises are for one purpose and one purpose only, which is great, can be great. But we cover a lot of territory with this project.”

Eddy will be in Calgary on Nov. 21 to accept the award.