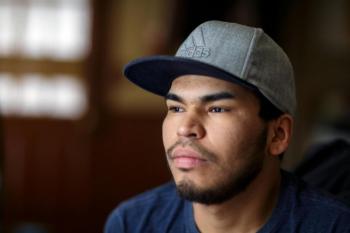 Xavier Moushoom is the lead plaintiff. Photo courtesy of the International Bureau for Children’s Rights

“It is certainly our hope that this will be dealt with as expeditiously as possible by the federal court because victims of this have been waiting long enough.” — William Colish, counsel with Kugler Kandestin
By Shari Narine
Windspeaker.com Contributor

Lawyers for a $3.05 billion class action lawsuit against the federal government for discrimination in the funding of First Nations child and family services will proceed with their suit.

The federal government had until March 7 to respond to a letter on the matter by the law firms of Kugler Kandestin (Montreal-based) and Sotos (Toronto-based).

“We did receive a response from (the federal government). I won’t be commenting on the response,” said William Colish, counsel with Kugler Kandestin.

“Our focus right now is to proceed with the class action. We’ll see if this matter needs to be fully litigated and we’ll take it from there,” he said.

Colish says the next step is for the court to certify the class action.

The statement of claim was filed in Federal Court in Toronto and Montreal on March 4. It alleges that the federal government knowingly underfunded First Nations child and family services and removed children from their homes as first measures and not as a last resort, placing them in foster homes.

The class action seeks financial compensation in the amount of $3.05 billion for those youth, including First Nations youth on or off reserve, who have been “denied or delayed receipt of health and social services and products because of the Crown’s narrow application of Jordan’s Principle.”

The class action lawsuit covers the period from April 1, 1991, to March 1, 2019. Colish is unclear as to how many people will qualify.

“Our estimate is that over the class period there were hundreds of thousands of children placed into foster care homes, but we don’t have exact numbers on that just yet,” he said.

He notes that the 2016 census indicated that 15,000 First Nations children were in foster care.

Xavier Moushoom is the lead plaintiff on behalf of the case.

“Xavier is an outspoken critic of the First Nation child and family program that he had been subjected to in Quebec. He’s committed to seeing this change and for seeking compensation for what he’s been through and what others have been through,” said Colish.

According to the statement of claim, Moushoom was born in Lac Simon in 1987, a member of the Anishnabe Nation. He lived with his mother, a residential school survivor who suffered from alcohol abuse, and his brother on the Lac Simon Reserve, in Quebec, until 1995 when he was apprehended.

Starting in 1997, Moushoom was in 14 different foster homes in Val D’Or from the ages of nine to 18. Over this time he lost his language and his cultural ties. He was forced to leave his foster home at the age of 18. In the years that followed he suffered from anxiety attacks and developed substance abuse problems.

Colish says that as far as he knows this is the only class action going forward both nationally and provincially.

The CHRA allows up to $20,000 per victim and an additional $20,000 if that discrimination was “wilful and reckless.” Compensation can be claimed dating back to 2006 (a year prior to the complaint being filed with the Canadian Human Rights Tribunal) and carry through to now as Canada has not fully complied with the Tribunal’s orders. The federal government has not moved from its official position, in which it said it would pay no compensation.

“Class actions are the most appropriate, the most efficient vehicle for bringing forward claims for compensation for mass numbers of individuals. This has been affirmed and recognized by the Supreme Court of Canada on a number of occasions,” said Colish.

“Calls have been coming in and people have been visiting the (class action) website,” said Colish.