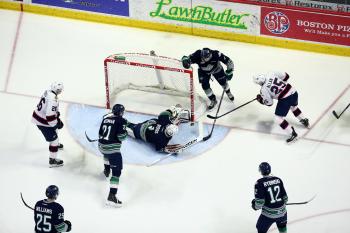 Photo from Sunday's game, a 6-3 triumph for the Thunderbirds over the Regina Pats. It was Roddy Ross' first WHL win. Photo by Keith Hershmiller

“We’ve been hearing about him for awhile. We like his size and he seems to keep the puck in front of him.” — Thunderbirds’ general manager Bil La Forge
By Sam Laskaris
Windspeaker.com Contributor
SEATTLE

A solid start to his junior hockey career has earned Indigenous goaltender Roddy Ross the chance to prove himself in a higher calibre league.

But on New Year’s Day it was announced that Ross had signed a Western Hockey League (WHL) standard player agreement with the Seattle Thunderbirds.

The Thunderbirds, who are based in the state of Washington, are one of five American franchises in the 22-team WHL, which primarily features squads in western Canada.

The WHL, comprised of Major Junior teams, is a step up from the AJHL, made up of Junior A clubs.

Ross had been placed on the Thunderbirds’ protected list of players at the start of the season.

Ross knew the Seattle team was keeping tabs on him.

“Every now and then they would call me and ask me how I was doing,” he said.

Prior to this season Ross had received invitations to attend training camp from five different WHL franchises.

But Ross turned down all those offers as he was focused on suiting up for the Kodiaks in the AJHL, after attending their spring camp.

Ross ended up appearing in 22 games with the Kodiaks, posting an 8-5-5 record. He also had a 2.94 goals-against average and a .920 save percentage.

Ross’ play in Camrose had generated some interest among NCAA Division 1 schools. He was confident he would have earned an athletic scholarship from an American university had he stayed with the Kodiaks.

“I think I would have had an offer if I had kept playing (in Camrose),” he said.

Individuals who play in the Canadian Hockey League (CHL), however, are not eligible to earn athletic scholarships from U.S. schools later on.

But those that toil in the CHL do earn one-year of education from a Canadian post-secondary school for every season they play.

By suiting up in the WHL now, which is more heavily scouted than the AJHL, Ross is enhancing his chances of being seen by pro scouts.

The Thunderbirds’ brass is keen on Ross, who is 6-foot-4 and weighs 180 pounds.

“We’ve been hearing about him for awhile,” said Seattle’s general manager Bil La Forge. “We like his size and he seems to keep the puck in front of him.”

“He had a great year in Midget,” La Forge said. “Obviously there was some league awareness about him.”

Ross had spent the 2017-18 season at the Midget level with Saskatchewan’s Tisdale Trojans. He had an impressive 1.85 GAA and a save percentage of 9.40 in 22 regular season appearances.

Though he didn’t have any WHL experience before, the Thunderbirds’ faith in Ross was displayed when they opted to trade away their 19-year-old goaltender Liam Hughes to Lethbridge to free up a roster spot.

Hughes had been Seattle’s Number 1 goalie this year playing in 29 games prior to his trade.

Besides Ross, the Thunderbirds’ other goalie now is 17-year-old rookie Cole Schweibus, who has played in seven games this season.

After signing his contract to play with the Thunderbirds, Ross, who spent the Christmas holidays at his home in Meadow Lake, Sask., did not immediately travel to Seattle.

That’s because the squad was set to embark on a six-game road trip through western Canada.

Ross joined his new teammates for a match against the host Brandon Wheat Kings this past Friday.

Though he didn’t start that contest, Ross did enter the game around the five-minute mark of the second period after Schwebius had given up four goals while facing 13 shots.

Ross surrendered three goals on the 22 shots he faced and the Thunderbirds lost the match 7-3.

Two days later Ross earned his first WHL victory. He made 19 saves en route to a 6-3 triumph over the Regina Pats.

The Thunderbirds, however, were edged 4-3 by the Saskatoon Blades on Tuesday night. Ross did not see any action in that contest.

Before returning to Seattle, the Thunderbirds are also scheduled to play in Prince Albert tonight  (Wednesday) and against the Moose Jaw Warriors and Swift Current Broncos, this Friday and Saturday, respectively.