Tripp racking up the points in his hometown 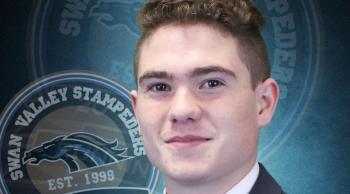 Josh Tripp is finishing off his junior hockey career exactly where he started it, in his Manitoba hometown of Swan Valley.

The 20-year-old forward is currently starring in the Manitoba Junior Hockey League (MJHL) with the Swan Valley Stampeders, having returned home after playing a couple of seasons south of the border.

Though he grew up in Swan River, Tripp is a member of Yukon’s Liard First Nation, via his father Ken.

Tripp, a 5-foot-10, 165-pound forward, is putting up some impressive numbers in his final season of junior eligibility.

He’s leading the MJHL scoring race having accumulated 56 points, including a league-leading 26 goals, in 36 matches.

Tripp has also been honoured with a pair of league awards. He was chosen as the MJHL’s player of the month for November. And he was also deemed the league’s player of the week this past week.

“I wanted to have a good year but maybe this pace is a bit surprising for me,” said Tripp, who is averaging 1.56 points per outing.

Tripp is keen to continue his torrid start to the season.

“I hope so,” he said. “It would be nice to keep this pace up and maybe even win the league scoring title.”

Tripp had kicked off his junior career during the 2015-16 campaign with his hometown Stampeders. He collected 47 points (23 goals and 24 assists) in 55 matches that season.

But he opted to head to the U.S. the following season where he hooked up with the Texas-based Corpus Christi IceRays of the North American Hockey League (NAHL).

Tripp registered a 40-point season during his first year with the IceRays. He also started the 2017-18 season with the Corpus Christi club.

But after he was sidelined with some torn ligaments in his ankle, Tripp asked for his release so he could return home. Once he was healthy he rejoined the Stampeders.

Tripp said he wanted to return home so he could conclude his junior hockey career in front of family and friends.

Tripp believes the familiarity of playing in his hometown could indeed be a contributing factor to his start this season.

Tripp added there are some noticeable differences between the NAHL and the MJHL.

“The North American league was older,” he said. “There is no limit on how many 20-year-olds you can have on the team. And it’s really systematic.”

Tripp said in the MJHL players are encouraged to show off their skills and be more creative.

And that’s just fine with Tripp since he is attempting to showcase his talents in the hopes of continuing his career at the post-secondary level next season.

His play so far has generated a fair amount of interest from university teams from both the United States and Canada.

Should Tripp choose to go the U.S. route, Stampeders’ head coach/general manager Barry Wolff believes he could suit up and have an impact with an NCAA Division 1 club.

“He’s got to make the right choice,” Wolff said, adding a number of programs prefer to groom their newcomers and not give rookies a lot of ice time.  “I know he wants to play right away.”

Tripp said heading to a Canadian university is also an appealing thought. He does not necessarily want to wait until the end of the current season before finding out where his future will take him.

“Hopefully I get some offers soon and I can make a decision,” he said.

Wolff believes the university squad that ends up with Tripp will be getting a quality individual.

“He’s a first-class kid, definitely a leader for us,” he said.

And that’s not just on the ice.

“We do a ton of community events here and he’s always helping out with them,” Wolff added.

Tripp is not quite sure what he would like to study at the university level. He graduated from high school in 2016.

He hasn’t been in school since then. But he is planning to take some classes starting next month at the University College of the North’s regional centre in Swan River.

He’s planning to meet with a counsellor soon to determine how many courses and which ones would interest him.

In the meantime, Tripp has been earning himself a little bit of extra cash by working some evenings doing some cleanup work at a local lumber mill.