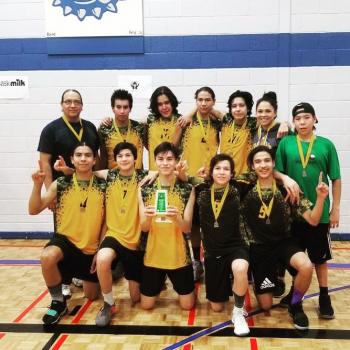 “Anybody could have won it. But the way we were conditioned and practiced, it was more of a mental state of team unity.” —Winston Walkingbear
By Sam Laskaris
Windspeaker.com Contributor
THUNDERCHILD FIRST NATION, Sask.

Winston Walkingbear believes a pair of off-season wilderness survival adventures is one of the main reasons his volleyball squad captured a provincial championship.

Walkingbear is the head coach of the Thunderchild Thunder, which won the gold medal this past weekend at the Saskatchewan high school senior boys’ 1A volleyball championships.

The Thunder won all seven of their matches at the tournament. The provincial tourney was co-hosted by a pair of communities, Middle Lake and Lake Lenore.

The provincial 1A tournament is restricted to schools that have less than 20 male students in Grade 10 to Grade 12.

The Thunderchild school— Piyesiw Awasis in Cree— has 15 male students in those three grades. And 10 of them were on the volleyball club.

Walkingbear was not all that surprised to see his charges win a provincial title.

“We knew we had the talent,” he said.

And those five-day wilderness survival adventures the team members participated in this past summer in their community greatly solidified team unity.

“That was awesome,” Walkingbear said of the excursions, which included some Elders who passed on inspirational messages based on their Cree culture.

“When we went on to the court they envisioned it was a battlefield and they had to back each other up.”

This marked the first time the Thunder had won the Saskatchewan crown.

The Thunderchild squad, however, had also previously qualified for its provincial championships four years ago. It won a bronze medal at that event staged in Fox Valley.

As for this season, the Thunder was undefeated against Saskatchewan opponents. It compiled an impressive match record of 53-0. In fact, the team did not even drop a single game in the process.

Thunderchild’s in-province undefeated record is even more impressive considering several of its victories was against opponents with much larger enrolments. The Thunder competed and won exhibition or tournament matches against 2A, 3A, 4A and 5A schools.

Those at the 5A level can include as many as 2,500 male students.

The only time the Thunderchild team tasted defeat this season was when it travelled to an out-of-province tournament in Winnipeg.

The Thunder posted a 3-2 record at that event, which primarily featured 5A schools.

As for their own provincials, Walkingbear believes his squad was fortunate to come out on top in the 10-team tournament.

“Anybody could have won it,” he said. “But the way we were conditioned and practiced, it was more of a mental state of team unity.”

For Walkingbear, a former principal and director of education at the Thunderchild school, this marked his fourth year of coaching the team.

His daughter Skylar served as the assistant coach.

The Thunder roster includes four of Walkingbear’s sons, two of which are adopted.

Prior to the provincials two of Walkingbear’s sons, 17-year-old Ryzen River and 16-year-old Askiy, who are in Grade 12 and 11, respectively, agreed to join Alberta’s Olds College where they will continue their post-secondary volleyball careers.

“It’s a team effort,” Walkingbear said. “But those guys were the two stars.”

“He wants them to come and train with him and make the team,” Walkingbear said.

Meanwhile, Walkingbear’s adopted sons on the Thunder roster are Magic Wapass, a Grade 10 student, and Dominic Jimmy, who is in Grade 9.

Walkingbear said the Thunder played the majority of their contests with little fanfare this season.

But when they got to the provincials, a busload of more than 40 community members made the four-and-a-half hour trek to Fox Valley to support the team.

And it also resulted in somewhat of a brief delay in the tournament awards presentation.

“Once we won the championship, the first thing they did immediately, before they lined up to get their medals, was to go to the community members there and they hugged them and shook their hands and thanked them for being there,” Walkingbear said.

A ceremony is also expected to be held in the coming weeks in the community to celebrate the team’s provincial title.

Walkingbear said the Thunder are already looking forward to hopefully winning it all again next year. Seven of the club’s players are eligible to return.

“We’ve already set that as a goal – to defend the championship,” he said.