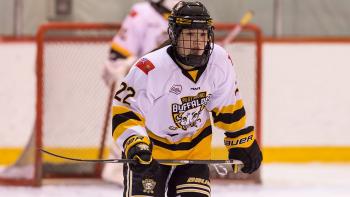 “When I saw her in the spring tryouts I said ‘we have to sign her because she’s going to score 100 goals for our team’.” — Pilot Mound head coach Harry Mahesh
By Sam Laskaris
Windspeaker.com Contributor
PILOT MOUND, Man.

Carrigan Umpherville is looking forward to making individual and team history during the 2019-20 hockey season. Umpherville, a member of Manitoba’s Cross Lake First Nation has verbally agreed to play next season with the Long Island University women’s team.

It will be the debut season for the NCAA Division 1 squad, which is based in Brooklyn, N.Y. The team will compete in the New England Women’s Hockey Alliance.

“It’s a proud moment for my family and me,” said Umpherville, a 17-year-old forward. “And I’m proud to share it with anybody.”

But her heart is set on attending Long Island.

Though she has verbally agreed to attend Long Island, Umpherville still needs to write her SAT next month. With a current over-all average of about 80 per cent, she’s confident she will be able to get accepted into the U.S. school.

She’ll make her signing official when she attends the New York school.

She’s leading the Buffaloes in scoring having racked up 42 points (23 goals and 19 assists) in 48 matches, which includes league as well as tournament action.

Mahesh, a former pro, said he knew Umpherville was a special player when he first laid eyes on her.

“When I saw her in the spring tryouts I said ‘we have to sign her because she’s going to score 100 goals for our team’.”

Pilot Mound is one of four clubs participating in the CSSHL’s female Varsity division. The Buffaloes are atop the league standings with an impressive 17-1-2 mark.

Mahesh is confident Umpherville will end up capturing some individual hardware this season.

“She’s a candidate for the team MVP and the league MVP,” he said. “And I think she’ll get it. She’s the top scorer on the top team in the league. It should be a no-brainer.”

A year ago, during Pilot Mound’s inaugural season in the female Varsity division, the club finished dead last in its league standings, winning just five out of its 25 contests.

Mahesh said Umpherville has played a key role in the team’s turnaround.

Mahesh also has plenty of other praise for the teen.

“She’s kind of a low-maintenance player,” he said. “And she has a knack for the game.

She’s super coachable. She shows up and does her work.”

“It’s a big city and it’s got a lot of prestige,” he said. “She thinks she can go there and blaze a trail for other Indigenous players coming after her.”

Mahesh is confident Umpherville will be able to handle the calibre of play in Division 1 hockey.

“I find at this level she’s not challenged enough,” he said. “She wants to score every shift and she gets mad when she doesn’t. When she’s challenged, I think her game is going to rise up.”

Umpherville is hoping to study Kinesiology at Long Island.

And she’s obviously also looking forward to suiting up for the university squad.

“The coach has really convinced me it’s going to be a great program,” she said.

Umpherville already has some experience living and playing in a major American city. Last year she was a member of the Boston Shamrocks, who compete in the Junior Women’s Hockey League.

She wasn’t entirely thrilled with her time in Boston.

“I wanted to experience the city but nobody ever made an effort to take us anywhere,” said Umpherville, adding adult supervision would have been required for her and teammates to see Boston’s sights.

Umpherville said some of her friends from her First Nation who played at Pilot Mound last year convinced her to join them this season. The club now features four players from the Cross Lake First Nation.

Umpherville is enjoying her one and only season at the school.

“People are so welcoming here,” she said. “And we practice every day and play a lot of games.”