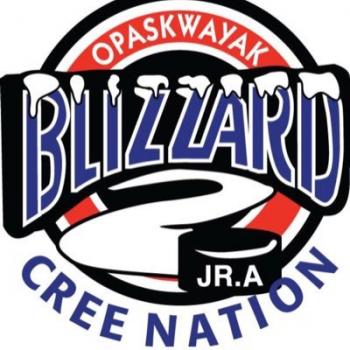 Rumours of the demise of the Opaskwayak Cree Nation (OCN) Blizzard have once again been put on ice.

There has been talk for a couple of years now that the Manitoba Junior Hockey League squad would not be around for much longer.

But the Blizzard will definitely be icing a squad for the 2018-19 campaign, thanks to a recent partnership and commitment from the Opaskwayak Cree Nation.

The Blizzard future first started looking bleak back in December of 2016 when the Opaskwayak Cree Nation, which was a major financial backer of the Junior A team, announced it would not be providing any further support following the conclusion of that season.

While reports surfaced the Blizzard, which has been operating since 1996, would fold, members of the organization and community mobilized and staged a Save Our Blizz campaign.

This venture proved successful as enough support was generated from the Opaskwayak Cree Nation and The Pas, the community where the Blizzard plays its home matches, to have the team participate during the 2017-18 campaign.

Whispers that the squad would not be playing during the upcoming season were laid to rest last month when the Blizzard announced it once again had some financial banking from the Opaskwayak Cree Nation.

Blizzard president Andre Murphy said chief and council from the First Nation agreed to provide the club with a $75,000 loan after team officials impressed them with a solid three-year business plan.

“Our intent is to repay the loan by the end of the year,” said Murphy, a former Blizzard assistant coach and assistant general manager who became the team president this past April.

OCN Chief Christian Sinclair was willing to offer the First Nation support after seeing what the Blizzard brass is planning to do to keep the team afloat.

“It’s been some time since we have seen the detail and commitment from the OCN Blizzard organization and its Board of Directors,” Sinclair said in a news release.

Murphy said the cash infusion from the Opaskwayak Cree Nation comes at a much needed time. He said that’s because some people were hesitant to provide support to the club not knowing if it would indeed be around for the upcoming season.

Now that confirmation has been received, Murphy said ticket sales have picked up and sponsors have started coming on board in recent weeks.

“There’s still a lot of work to be done,” said Murphy, adding it will cost $650,000 to operate the Blizzard during the 2018-19 season. “By no means are we okay now. The team still has to come together and be a successful business.”

Members of the public will be able to see exactly what direction the Blizzard is taking this Thursday. All are invited to attend the club’s annual general meeting to hear about all of the Blizzard plans and ask any questions they wish.

“It will be an opportunity to get our club in front of the community and for them to see what direction we are going,” Murphy said.

The Blizzard will be going in a new direction with their bench boss. Late last month it was announced that Matt Summers, who played for the squad for four seasons, from 2003 to 2007, is the club’s new head coach.

Summers, 32, is entering his second season in the coaching ranks. He spent last season as the head coach of the Tri City Icehawks, a Michigan-based club in the United States Premier Hockey League.

The Blizzard have also announced Greg Hunter will work as an assistant coach while doubling as the club’s interim general manager.

The team is looking to hire another assistant coach as well as a trainer and equipment manager.

The OCN side is coming off a 32-20-5-3 regular season mark last season. The club placed fourth in the league standings but was knocked out of the post-season in the first round after losing its quarter-final series.

The Blizzard has had its share of success in its history. In fact, the team managed to win five consecutive league championships from 1999 to 2003.

The squad has also had two of its former players, Jordin Tootoo and Steve MacIntyre, go on to the NHL.