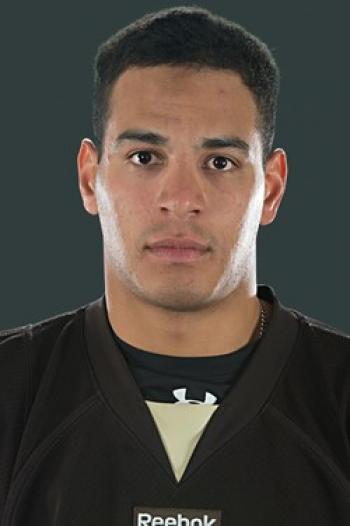 Shaq Merasty is about to fulfill his childhood dream and become a pro hockey player.

Merasty, whose family is from Manitoba’s Berens Rivers First Nation, has inked a contract to play for the Wichita Thunder, members of the ECHL (formerly East Coast Hockey League) for the 2017/18 season.

The ECHL is considered the second best minor pro hockey league in North America, behind only the American Hockey League.
The Kansas-based Wichita franchise is an affiliate of the National Hockey League’s Edmonton Oilers and the AHL’s Bakersfield Condors from California.

Merasty, 26, had spent the past three seasons playing for the University of Manitoba Bisons. Though the 6-foot-5, 220-pound forward was never drafted by a pro squad, Merasty started to generate some interest from clubs while he was with the Bisons.

“After my second year at Manitoba my coach told me there were some (pro) teams that were interested in me,” he said.

Merasty, however, returned to the Bisons for another season while letting his Vancouver-based agent Cliff Mander from CKM Sports Management explore possible pro opportunities.

A handful of ECHL squads, as well as some European squads, expressed interest in Merasty for the coming season.

“I let my agent deal with all of that,” he said.

Though the possibility of playing abroad existed, Merasty was not keen to venture too far for his first pro season.

“I wanted to start my career in North America,” he said. “(Playing in) Europe could be an option in the future.”

Merasty, who started playing hockey at the age of four, said he has not given up on his boyhood fantasy to play in the NHL.

Now that he’ll be in the ECHL, he’ll only be one step below the AHL, which is a mere step away from the NHL.

“You never know,” he said. “Hopefully there will be some potential to get called up if a team runs into some injury problems. But I’m just going to go to Wichita and do my best there and see what happens.”

Merasty is scheduled to report to the Thunder training camp on Sept. 30. He will make the 12-hour drive from his Winnipeg home the day before.

Wichita, one of 27 squads that will compete in the ECHL this year, will open up its regular season on Oct. 13 with a home contest versus the Indy Fuel.

Merasty realizes there will be a bit of an adjustment now that he has joined the pro ranks. But one thing that won’t be different for him is the age of those he’s playing against.

Most teams in the Canadian university ranks are stocked with players in their early 20s.

Merasty had played his junior hockey with the Portage Terriers, members of the Manitoba Junior Hockey League. He spent three years with the Terriers and won back-to-back league championships in 2011 and ’12.

Merasty then began his collegiate career by playing the 2012-13 season with the Michigan-based Adrian College Bulldogs, an NCAA Division III club.

After one year with the Bulldogs he opted to return to his home province and transfer to the University of Manitoba. Since he was a transfer student, Merasty was allowed to attend classes but not suit up for the Bisons during his first year at the Manitoba school.

Merasty technically still has one year of playing eligibility remaining in the Canadian university ranks. And by turning pro now, he’s not sure when he will complete the final few credits he needs to receive his Native Studies degree.

He said he does plan to finish off his degree at some point, probably by taking online classes.

“For now I’m just going to focus on hockey,” he said.