Jr. Senators have a powerplay weapon and his name is Chiwetin Blacksmith 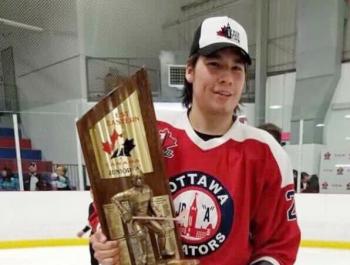 Now the 20-year-old Cree forward, a member of the Central Canada Hockey League’s Ottawa Jr. Senators, is hoping to conclude his junior career by capturing a national title.

Blacksmith, who is from the Cree community of Waswanipi, Que., will be flying out to the West Coast on Thursday with his teammates to compete in the RBC Cup tournament, the national Junior A hockey championship.

The Chilliwack Chiefs, a member of the British Columbia Hockey League (BCHL), is hosting the five-team national tournament which begins this Saturday and continues until May 20.

As hosts, the Chiefs received an automatic entry into the RBC Cup.

Blacksmith, who led the Jr. Senators in scoring this year by racking up 67 points (16 goals and 51 assists) in 59 regular season contests, has hoisted a championship trophy over his head twice this season.

For starters, he helped the Ottawa club win the CCHL title. The Jr. Senators then advanced to the RBC Cup tourney by winning the Fred Page Cup, a regional qualifying event for the nationals.

“We’re not done yet,” Blacksmith said. “Two (championships) down and one to go.”

Blacksmith said he’s pumped about the prospect of concluding his junior career with a Canadian title.

“I’m very excited and very humbled,” he said. “Hopefully we’ll get to win the national championship.”

He decided to sign with the Ottawa squad even though he had spent portions of three seasons playing with clubs in higher calibre junior leagues. Blacksmith had toiled with the Ontario Hockey League’s Barrie Colts and with the Quebec Major Junior Hockey League’s Gatineau Olympiques.

“I knew they were a good team and I knew they were going to be hosting the Fred Page Cup this season and I wanted to be a part of that,” Blacksmith said of the Jr. Senators.

Though he still had a season of junior eligibility remaining, Ottawa coach/general manager Martin Dagenais said he was not 100 per cent certain that Blacksmith would return to his roster this year. He said there was some speculation Blacksmith would move on and play for a Canadian university team for the 2017-18 season.

But Dagenais is certainly glad Blacksmith has been around this year.

Blacksmith insists he had every intention to use up his final season in the junior ranks and return to the Jr. Senators.

“My plan was to stay here for the two years,” he said.

And Blacksmith will continue to play in Ottawa after his days with the Jr. Senators are over. That’s because he has committed to the Carleton University Ravens in the nation’s capital and will suit up for this squad beginning with the 2018-19 season.

He committed to join the Ravens this past December.

That was the same month the Jr. Senators traded away Blacksmith’s best friend, Silas Mattawashish, who is also from his hometown of Waswanipi. Mattawashish was dealt to the CCHL’s Nepean Raiders.

“I was bummed out for a while,” Blacksmith said. “He was also my roommate here. But it was something that is out of our control for us players.”

While the Jr. Senators are on a roll lately, Blacksmith has been in a bit of a scoring funk. He had nine points in 15 CCHL playoff contests.

But he hasn’t scored since April 6, during Ottawa’s second-round CCHL series against the Brockville Braves. And he only managed to register one assist in his team’s four Fred Page Cup outings.

Blacksmith does not seem too concerned he hasn’t scored lately.

Dagenais would have obviously liked to see Blacksmith score more often in the post-season. But he too is not fretting about it.

“We score by committee,” he said. “During the Fred Page Cup our top six forwards had no goals until our final game.”

Dagenais added Blacksmith, who frequently controls play once he is on the ice because of his outstanding puck possession, is still a player who has to be watched closely by opponents.

“I think he’s still our top weapon on the powerplay,” Dagenais said.