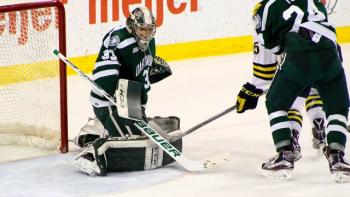 It’s been a busy summer for Devin Buffalo, and not just because the 23-year-old from Alberta’s Samson Cree Nation is gearing up for his final season of NCAA hockey with the New Hampshire-based Dartmouth Big Green.

Buffalo has also spent a chunk of his summer helping out at three separate multi-sport competitions for Indigenous athletes.

“Last summer I was at school,” said Buffalo, who now calls the Alberta village of Pigeon Lake home. “So I had been gone from home for a year-and-a-half. Coming back this year I thought it was a good summer to give back to the community.”

Buffalo’s efforts have included serving as the ball hockey co-ordinator at this week’s Alberta Indigenous Games. The ball hockey matches at these Games, being staged in Edmonton, were held on Monday and Tuesday.

Another event Buffalo assisted at was last month’s North American Indigenous Games (NAIG), which were primarily held in Toronto. He served as a chaperone for the Alberta track and field athletes that participated at the NAIG.

Buffalo was one of three chaperones for Alberta’s track and field contingent. The squad also included a head coach and an assistant coach.

But since many of the events overlapped for several of the Alberta athletes, Buffalo often stepped up and served as more than just a chaperone. He not only took several of the athletes to their events but was also their only support staff member able to be present.

Buffalo had also helped out with at the World Indigenous Nations (WIN) Games held in early July in Edmonton.

Before the WIN Games started, Buffalo helped out with registrations and with other organizational details. Then he was part of those who showed up at the airport to welcome athletes from around the world.

And then during the actual Games, he helped out in a variety of roles.

Buffalo is hoping that he was able to also serve as a role model for all the youth at the events he was a part of this summer. He’s keen to show them Indigenous youth can achieve great heights, such as attending an Ivy League school like himself.

“It is a realistic goal and if they see someone from their community do it, I can only hope that more kids will put themselves out there (and) take that risk because it is possible,” he said.

Before he headed to Dartmouth, Buffalo had earned some recognition in a couple of Junior A leagues in Canada.

He began his junior career with the Manitoba-based Flin Flon Bombers, who are members of the Saskatchewan Junior Hockey League.

After spending two-and-a-half seasons with the Bombers, Buffalo was traded to the Alberta Junior Hockey League’s Drumheller Dragons, where he finished up his third and final junior campaign.

Buffalo is expected to once again be the Number 1 puckstopper for the Big Green this season.

During his first season with the Ivy League squad, Buffalo was one of three goalies on the team roster but he did not see any game action. He attended all of the team’s practices and would get to dress for home matches.

He also joined the squad for all away games but sat in the stands.

Then during his sophomore season Buffalo appeared in five contests.

As for last year, however, Buffalo was the primary go-to guy between the pipes. He appeared in 29 of the club’s 31 matches and registered a 9-16-3 record and a 3.29 goals-against average.

“We had 11 freshmen last year,” he said. “We were a pretty young team and we were still able to get some big wins.”

Buffalo said several of Dartmouth’s most impressive victories a year ago were against some of the top-end squads in their 12-team Eastern College Athletic Conference. The Big Green placed ninth in the over-all league standings.

“Last year we beat the big teams when we needed to,” he said. “This year we need to be more consistent with the other teams as well.”

Though he’s heading into his final season of collegiate hockey, Buffalo would love to continue playing the sport after his Dartmouth days.

“If the opportunity arises, I would love to play pro,” he said.

Buffalo believes he could go on to play pro because he’s seen a number of other collegiate goalies from his league the last couple of seasons go on to ink contracts, including some with National Hockey League franchises.

“That gives me motivation and hope that they’re signing NHL and (American Hockey League) deals,” he said.