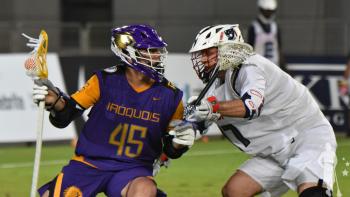 “We believe we represent all the hopes and dreams of all Indigenous people around the world.” —Leo Nolan, the executive director of the Iroquois Nationals lacrosse program
By Sam Laskaris
Local Journalism Initiative Reporter
Windspeaker.com

The lacrosse community worldwide, especially the Indigenous one, is livid.

But Leo Nolan, the executive director of the Iroquois Nationals lacrosse program, is preaching calm and patience.

He is confident the decision to exclude the Iroquois Nationals from the 2022 World Games, scheduled to be held in the Alabama city of Birmingham, will be reversed.

It was recently revealed that eight countries were invited to send their national men’s field lacrosse teams to the Birmingham Games.

But the Iroquois Nationals, who represent the Haudenosaunee Confederacy at international events, were not among those invited.

That’s even though Indigenous people created the sport and the Iroquois Nationals are consistently one of the top three finishers, along with Canada and the United States, at international men’s tournaments.

The Iroquois Nationals are a member of World Lacrosse, the global governing body for the sport.

But World Games’ officials were following criteria established by the International Olympic Committee (IOC) when they determined which squads to invite to the multi-sport 2022 Games.

The IOC does not currently recognize the Haudenosaunee Confederacy as a nation.

“We are trying to take a very positive approach and a very diplomatic approach to this,” Nolan said.

To that end, Nolan confirmed that an Iroquois Nationals National Olympic Committee has been launched, with the goal of getting the Haudenosaunee Confederacy recognized as its own country. That would allow the six First Nations in its confederacy – Mohawk, Seneca, Cayuga, Oneida, Onondaga and Tuscarora – to eventually compete at all international competitions, including the Olympics.

Nolan said it will be awhile before an application is submitted to the IOC. That’s because officials want to ensure all eligibility requirements and criteria are being met.

“I can’t really give you a hard and fast date,” Nolan said. “I would guess we could do it within the year.”

If successful, the Iroquois Nationals would be allowed to send athletes in other sports as well to international competitions.

“Our intent would not be to exclude anyone, whether that be a canoeist or a marathon runner or a track and field athlete,” Nolan said. “It wouldn’t be exclusive for lacrosse.

Nolan said a long-term goal is to have the Iroquois Nationals be one of the participating squads when men’s lacrosse will be reintroduced to the Olympic program at the 2028 Summer Olympics in Los Angeles.

“It’s not like we’re on a tomorrow deadline,” he said.

Nolan added it would be extremely beneficial for organizers of the World Games to include the Iroquois Nationals lacrosse squad.

“We are typically the biggest draw (at international events),” he said. “Our merchandise flies off the shelves.”

Nolan is upset World Games organizers did not consult with any Iroquois Nationals officials before announcing the eight lacrosse clubs it was inviting to its competition.

“This happened without any sort of communication with us,” he said.

And it’s not just those associated with the Iroquois Nationals who were discouraged by the announcement.

As of Wednesday morning, more than 42,000 people had signed a petition, started by a Nova Scotia teen last week, demanding the Iroquois Nationals be extended an invitation to take part in the 2022 World Games. See petition

Nolan said the Iroquois Nationals are not simply trying to make a statement for those involved with its program.

“We believe we represent all the hopes and dreams of all Indigenous people around the world,” he said.

Both the Canadian and American lacrosse associations have expressed their support for the Iroquois Nationals.

Part of a statement from the Canadian Lacrosse Association reads as follows:

“Our support for the Haudenosaunee is confirmed by the social media postings from our players, coaches and fans, including many players from Team Canada. The Canadian lacrosse community stands strongly united in our support of the Haudenosaunee and their inclusion in all World Lacrosse events.”

“The exclusion of the Iroquois Nationals from international competition is not merely a loss for the Haudenosaunee; it is a loss for all nations, communities, and individuals who have embraced their game and helped to make lacrosse into what it is today.”

One of the top Indigenous players in the world, Randy Staats, a Mohawk from the Six Nations community of Ohsweken, wrote an opinion piece for an American publication last week offering his thoughts on the Iroquois Nationals’ exclusion.

“Putting on the Iroquois Nationals jersey evokes the same emotion from me every time, and it will never change,” Staats wrote. “To me, it’s the best feeling in the world. To represent my family, the Haudenosaunee and all Native Americans across the United States and Canada is much more than a game. It allows me to impact Indigenous people throughout Turtle Island. I would never trade it for anything.

Staats and Kyle Jackson, a member of Aamjiwnaang First Nation in southwestern, were two Indigenous players that helped the Boston Cannons win the Major League Lacrosse championship this past Sunday.

Jackson was also disappointed to hear the Iroquois Nationals were not invited to the World Games.

“It’s extremely upsetting,” he said. “There’s no reason why we should be left out of any world championships or international games.”

A joint statement issued July 29 from the International World Games Associations, World Lacrosse and The World Games 2022 Birmingham Organizing Committee, says inclusiveness is a key core value so they are working to explore whether it is necessary to change the format for the lacrosse competition at the World Games.

No timeframe for the discussions has been set to explore “reasonable solutions” and “finding an appropriate balance”.

“The World Games 2022 are still two years away, but all partners are very keen to reach an early agreement.”