Indigenous runner will head to Kenya to train 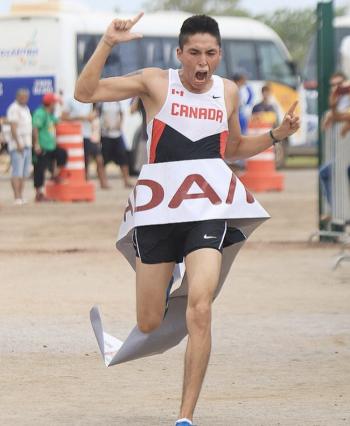 “When one door closes another opens. This is another opportunity in life so you just go for it.” — Rilee ManyBears
By Sam Laskaris

Earlier this year ManyBears, a member of Alberta’s Siksika Nation, had been offered a scholarship to attend Bacone College, located in the Oklahoma town of Muskogee.

But that plan didn’t work out. A few weeks before he was scheduled to leave for the American school, ManyBears was contacted and told the college was cutting funding for its cross-country running and track and field teams and that his scholarship offer was being revoked.

“When that fell through I started to think of options of what I was going to do,” said ManyBears, who is 23. “I knew I needed to go somewhere for less distractions. I really want to further my running career.”

ManyBears has been training lately in Calgary and with the Deerfoot Raiders, a running club on his First Nation that existed years ago and was revived this summer.

ManyBears decided to explore whether he could train in Kenya, considered one of the premier locations in the world to train for long-distance runners.

“I didn’t have any contacts,” ManyBears said. “But thank God for social media.”

Following some online investigative work on his own, ManyBears found a place to live. He leaves on Saturday for a six-month training session in the African country.

He’ll be based in a village named Iten.

“Some of the world’s best runners train in that area,” ManyBears said. “It’s not just runners from Kenya there. They come from all over the world.”

ManyBears said he has yet to connect with any of the running groups in Kenya. He plans to do that after he arrives.

“I’ll be staying in a house,” he said. “I’m just so grateful I found a place that is super cheap to stay.”

ManyBears has been employed as a youth worker for his First Nation for the past three years. But he is not planning to work at all while in Kenya.

Instead, he’ll be focused on his training and his running.

“There’s a few events I really enjoy,” ManyBears said, adding he is hoping his Kenyan training will lead to improved performances and ideally a spot on the Canadian squad that will compete at the 2020 Summer Olympics in Tokyo.

At this point ManyBears though does not wish to announce publicly which event(s) he is hoping to qualify for. Options include the 5,000-metre, 10-000-metre and marathon events.

ManyBears became the first person from the Siksika Nation to complete the Boston Marathon.

He ran that prestigious marathon in April of 2016, just one month after undergoing heart surgery.

ManyBears had found out during the summer of 2015 that he had Wolff-Parkinson White Syndrome, a condition which causes one to have a rapid heartbeat.

The first sign something was wrong was when he started experience fatigue after training sessions. And then some chest pains developed.

“All of a sudden those pains became more excruciating,” ManyBears said. “I thought I was having some sort of anxiety attacks.”

Despite having this condition ManyBears competed at the 2015 World Indigenous Games in Brazil. He ended up winning the gold medal in his eight-kilometre race.

“I was facing (my heart condition) at the time,” he said. “And I was going up against about 250 runners. Against all odds I ended up winning it.”

Though he had a corrective heart procedure in March of 2016, ManyBears was keen to take part in the Boston Marathon a month later.

“I pretty much set a goal of competing in Boston because my Grade 6 teacher ran it in 2013,” he said. “Just three years later I was able to do the same thing.”

ManyBears said he’s been 100 per cent fine since his heart procedure.

“Ever since then I’ve been great.”

Other accomplishments in ManyBears’ running career include winning three medals at the 2014 North American Indigenous Games, which were staged in Regina.

He captured a gold medal in his 3,000-metre race. And he earned bronze medals in both his 1,500-metre and six-kilometre events.

Now that he’s set to leave for Kenya, ManyBears is thinking about the quick turn his life has taken.

“When one door closes another opens,” he said. “This is another opportunity in life so you just go for it.”

ManyBears believes he would be too old to start thinking of earning a running scholarship from another post-secondary school.

But he would still like to pursue his education at some point, after he finds out what transpires with his Olympic aspirations.