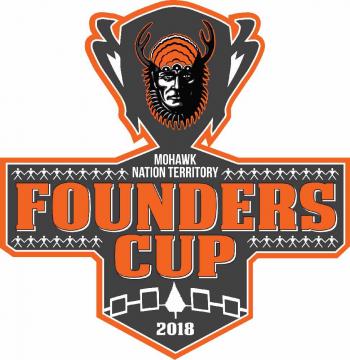 Several months of preparations are often required to host a national championship.

That’s why Kariwate Mitchell initially turned down a June request to have his lacrosse squad host the Founders Cup, the Canadian Junior B lacrosse championship, in August.

This year’s eight-team national tournament is scheduled for Aug. 14 to Aug. 18.

Mitchell is the coach and general manager of the Mohawk Medicine Men, an Akwesasne-based club that competes in the First Nations Junior B Lacrosse League (FNJBLL).

Another FNJBLL franchise, the New York-based Seneca WarChiefs, had originally been awarded the rights to host the 2018 Founders Cup.

The WarChiefs, who play home contests in Salamanca, N.Y., a 75-minute drive south of Buffalo, would have become the first American squad to host the Canadian tournament. The event has been held annually since its inception in 1972.

But the Seneca organization ran into some hurdles as it was unable to help secure work visas for the 10 Canadians that would have been required to officiate at the tournament.

A deadline of June 15 had been set to receive confirmation that work visas had been obtained for all travelling officials. But when that deadline was not met, the WarChiefs were forced to give up hosting rights for this year’s Founders Cup.

The WarChiefs’ brass contacted Mitchell to see if the Medicine Men would take over as hosts. Mitchell turned down that initial offer.

“To take this on with six weeks to go I was a bit reluctant,” he said.

That’s because Mitchell is fully aware of just how much work goes into preparing to host a national championship.

Back in 2011 he was the general manager of the Akwesasne-based Snake Island Muskies, who hosted the Presidents Cup, the Canadian men’s Senior B championship.

Hosting rights for the Founders Cup is rotated among member leagues in the Canadian Lacrosse Association.

FNJBLL officials were keen to have one of their squads host the event after the WarChiefs were forced to give it up. But they didn’t have too many options since the league only consists of four squads.

The Syracuse-area Onondaga Jr. Redhawks were not considered since, like the WarChiefs, they are in the U.S. and would have also been required to assist with obtaining work visas for officials from Canada.

Besides the Medicine Men, who are in their second year of operations, the only other FNJBLL entry is the Tyendinaga Thunder, a first-year team in Deseronto, Ont.

The Medicine Men play their home contests in Massena, N.Y., but for the Founders Cup all the games will be in Ontario at the A’nowara’ko:wa Arena on the Canada side of Akwesasne.

So about a week after turning down the offer to have the Medicine Men host the nationals, Mitchell once again was consulted.

“I knew they still didn’t have a host,” he said of his change of heart. “And the First Nations Lacrosse Association said we’ll have different committees to help you out.”

Despite having just a limited time to prepare for the nationals, Mitchell is now pleased how things are shaping up.

“I just came from a planning meeting this morning,” he said in an interview on Wednesday. “Everything seems to be on track now.”

Mitchell said he is confident the dozen members on the tournament’s planning committee will ensure everything runs smoothly at the Founders Cup.

“Some are on our executive board,” he said. “Some are community members that are passionate about lacrosse. And some are members of the community that enjoy helping out with special events.”

Though he attended several meetings to help prepare for the nationals, Mitchell is keen to step back and focus on getting his charges ready for the Founders Cup.

“I want to be able to coach my team,” he said. “I’m confident in the committee to carry on.”

Mitchell is hoping the Medicine Men can have some respectable results at the nationals. That’s even though the squad had a rather disappointing regular season and playoff.

The club won just two of its 11 regular season matches. And it was swept 2-0 in its best-of-three FNJBLL semi-final series by Tyendinaga.

The Medicine Men did have 25 players listed on their roster. But Mitchell said his side played most of its games this season with just 12 to 13 players.

“Guys had work commitments and later in the year we had some injuries,” Mitchell said. “It was tough to get a full team to a game.”

Mitchell is hoping, however, playing in a national championship will entice more of his players to come out. He thinks he should be able to dress the maximum 20 players for all of his squad’s games at the Founders Cup.

“We do have talented players,” he said. “But it’s tough when we’re shorthanded.”

The WarChiefs, the five-time defending FNJBLL champs, will be considered one of the pre-tournament favourites at the Founders Cup.

The Seneca club outscored the Medicine Men 62-13, winning all four of their regular season matchups.

“I’m hoping with a full roster we can compete with them,” Mitchell said. “I think we will.”

The Founders Cup will also include provincial champs from Junior B leagues in Ontario, Alberta, British Columbia, Quebec, Manitoba and Saskatchewan.