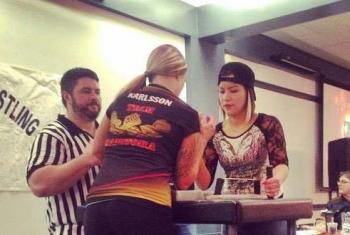 "The sport of arm wrestling doesn’t cost very much because you don’t need any equipment.” —Brittany Sutherland
By Sam Laskaris

Arm wrestling is already a family affair for Brittany Sutherland. Now the 32-year-old from Manitoba’s Peguis First Nation is doing her best to spread positive news about the sport, not only in her community but to as many others as possible.

Sutherland is featured in the new television series about the sport titled Arm Nation, which is being shown nationally on the Aboriginal Peoples Television Network (APTN).

The 13-episode series will be broadcast on Saturdays. Episode one in the series aired this past Saturday.

The half-hour episodes of Arm Nation follow the lives of more than a dozen Indigenous arm wrestlers who travel across Canada competing in various tournaments.

The series not only highlights participants in action but also documents the ups and downs they face in life, including their injuries, their relationships, as well as alcohol and drug use.

Sutherland had dabbled in arm wrestling since her early 20s. She would consistently capture top honours in her division at annual competitions held during her First Nation’s winter carnival.

Sutherland believes she won the title six years in a row. And then five years ago her husband Cory, also an arm wrestler, suggested she try her luck in pro events.

As it turned out Sutherland also captured a gold medal in her first professional competition, organized by the Manitoba Arm Wrestling Federation.

Since then she’s travelled across the country racking up numerous championships, including one this past weekend in Regina.

The Sutherlands have instrumental roles with the Peguis Arm Wrestling Club, launched two years ago. While Sutherland serves as a coach, her husband is the club manager.

All three of Sutherland’s children – sons Carter (13) and Connor (6) and daughter Cora (12) – also compete in the sport and have enjoyed success.

“It’s just being part of a club and belonging to something,” Sutherland added of the club on her First Nation, which has about 20 members. “It’s something to do and something to look forward to each week.”

Over the years there has been talk that arm wrestling could one day be included in the Olympics.

“Who knows,” Sutherland said. “One of us could be there.”

Arm Nation is produced by Montreal-based Picture This Productions, a company headed by David Finch and Maureen Marovitch, which has been making documentaries and TV series for more than 20 years.

Finch said Trevor Sanipass, an arm wrestler from Nova Scotia’s Eskasoni First Nation, pitched his company with the idea of doing an arm wrestling show a few years ago.

That led to discussions with APTN officials who were keen on the idea. The Picture This Productions crew then travelled to British Columbia, Ontario, Manitoba and Nova Scotia filming the series last year, culminating with the 2017 Canadian championships.

“I think it’s a unique look,” Finch said of the series.

He believes viewers can relate to and cheer on some of the arm wrestlers in the series. Episodes include arm wrestlers who are cancer survivors. Another show includes a competitor who suffered a horrific arm injury while others deal with participants who relapse with their alcohol or drug issues.

Finch anticipates Arm Nation is going to be a success.

“From the test audiences that we have shown this to we’ve gotten nothing but rounds of applause with how we’ve been handling this.”

Each episode of Arm Nation intertwines the lives of two characters as they juggle their lives while competing in their chosen sport.

For example, Sutherland is in three of the episodes.

Time will tell what sort of ratings the series will have.

But Finch already knows he would welcome the opportunity to make additional shows with the series.

“We’d love to have a second season,” he said. “There are so many more stories we think we can share.”

Finch said despite APTN’s Indigenous-themed mandate, Arm Nation is appealing to both Indigenous and non-Indigenous viewers.

“APTN is very forward thinking as they are focusing their audience on the general population,” he said. “They want to have universal themes with their shows.”