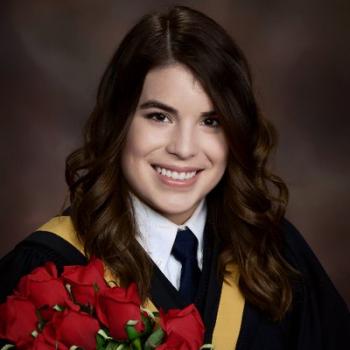 “It was nice to put that jersey on.” —Maryna Macdonald of Ditidaht Nation, B.C.
By Sam Laskaris

Though she’s been attending one of the world’s most prestigious universities for several weeks now, Maryna Macdonald frequently finds that she has to reassure herself that she is indeed a student/athlete at Harvard University.

Macdonald, a member of British Columbia’s Ditidaht First Nation, is a first-year student at the renowned university, located in the Massachusetts city of Cambridge, which is part of the Boston metropolitan area.

Macdonald, an 18-year-old who plays defence, is also gearing up for her rookie season with the Harvard Crimson women’s hockey team.

“It definitely hits you in different moments,” Macdonald said of the numerous times she has had to take a quick pause to confirm to herself that yes, she is actually at the Ivy League school.

She arrived at Harvard in August as her hockey squad began its preparations for the coming year. Her classes at the university began the first week of September.

Being a first-year student, Macdonald has yet to declare her major at the liberal arts school. But she is eager to eventually study environmental engineering.

Macdonald and her Harvard teammates are scheduled to kick off their 2018-19 regular season on Friday at home against the Dartmouth Big Green from Hanover in New Hampshire.

Harvard is the only Massachusetts-based entry in the ECAC Hockey loop.

A pair of Connecticut schools – Yale University and Quinnipiac University – are also members.

Harvard defeated visiting McGill University from Montreal 4-0 in its lone exhibition match, which was held this past Friday.

“It was nice to put that jersey on,” Macdonald said.

The teen was one of seven defence players Harvard dressed for that outing. Macdonald and another rookie, Kyra Willougby, took turns taking shifts with sophomore Sydney Sorkin. Macdonald said she still anticipates having some butterflies in her stomach prior to Friday’s official season opener even though she has already suited up for Harvard, albeit in a pre-season contest.

“Of course I’ll be nervous,” she said. “That’s a good thing though.”

Despite being a first-year university student, Macdonald is well accustomed to living away from home.

That’s because in 2017 she moved more than two hours from her home in Port Alberni, B.C. in order to spend her Grade 12 year at Shawinigan Lake School, a private co-ed boarding school.

She primarily made that move in order to toil with Shawinigan Lake’s Female Prep squad, which competes in the Canadian Sport School Hockey League.

The Shawinigan Lake squad managed to win just four of its 21 games. But Macdonald led all blueliners on her club in scoring with nine points, including four goals, while appearing in 18 matches.

Macdonald already knew what it was like to live away from home. But it’s a considerably different feeling now.

“Definitely being across the continent is different,” she said.

Macdonald insists she has not established any personal statistical goals she would like to achieve this season.

“I don’t like to set goals like that,” she said. “Sometimes it puts you in the wrong mindset.”

Before she headed to Shawinigan Lake, where she was an assistant captain, Macdonald had spent two seasons starring with the Vancouver Island Seals’ Major Midget AAA squad.

Macdonald also represented British Columbia four times at the National Aboriginal Hockey Championships. She was a member of B.C.’s bronze medallists at the national tournament in 2017.

Meanwhile, Macdonald is joining a Harvard squad that a year ago posted a conference record of 10-10-2, good for seventh place in its league. The Crimson also registered an over-all record of 13-16-2.

“We have a pretty young team,” Macdonald said, adding she is one of seven rookies on this year’s roster.

But that doesn’t prevent the Crimson from shooting for the stars. Macdonald said at a recent goal-setting meeting team members agreed they are striving to win a national title this season.

And even though they posted a .500 mark in conference play last season, Macdonald does not believe a league championship is out of reach this year.

“It could be anybody winning that,” she said.