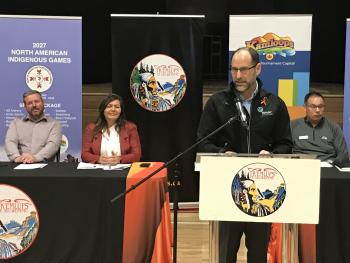 “The first part of that process was to compete on a provincial level. We did that. We did that with our partners. We created a solid first bid.” — Rosanne Casimir, the chief of Tk̓’emlúps te Secwépemc
By Sam Laskaris
Local Journalism Initiative Reporter
Windspeaker.com

Tk̓’emlúps te Secwépemc (formerly the Kamloops Indian Band) and the city of Kamloops have announced their intention to bid to host the 2027 North American Indigenous Games (NAIG).

A press conference was staged this past Friday, Nov. 25, to announce that the Tk̓’emlúps te Secwépemc and area bid has been selected in B.C. to put to NAIG organizers.

The move was endorsed by the Indigenous Sport, Physical Activity & Recreation Council (I-SPARC), the provincial governing body of Indigenous sports in B.C.

Tk̓’emlúps te Secwépemc/Kamloops is the first of eligible groups to announce a bid intention.

I-SPARC CEO Rick Brant said the NAIG Council, which traditionally awards the hosting rights for the Games, established a new hosting rotation a few years ago.

The 2023 NAIG will be held next July in Nova Scotia. Events will be staged in Halifax, Dartmouth and Millbrook First Nation.

Brant said those from Canada’s three western provinces—B.C., Alberta and Saskatchewan—as well as Yukon and Northwest Territories, are eligible to submit hosting proposals for the 2027 NAIG.

It is believed that neither Yukon nor Northwest Territories will submit bids, since they do not have sufficient suitable venues to host the multi-sport Games, expected to attract about 6,000 competitors in 16 different sports.

“Frankly it blew our socks off,” he said.

“As Canada’s tournament capital, you need no reminder of the extraordinary, world-class facilities that you possess,” he told organizers of the Tk̓’emlúps te Secwépemc/Kamloops bid, “but hosting a unique, one-of-a-kind event like the North American Indigenous Games requires more than just exceptional venues.”

Brant said officials demonstrated they have compiled a list of leaders to assist with the bid and have also shown strength with their partnerships and an ability to host a large multi-sport event.

As a result, Brant said I-SPARC was keen to become a bid partner. The organization announced $75,000 in funding to support the bid process.

“These Games are unlike any other international multi-sport Games,” Brant said. “They are about reducing barriers for Indigenous youth, families and communities. They are a gathering place for First Nations, Métis, Inuit, Native American peoples from across Turtle Island for the purpose of lifting up our youth and celebrating Indigenous excellence in sport in a culturally rich and a culturally safe environment.”

Though there have been no other public announcements from other bidders, Jason Peters, the president of the 2027 Tk̓’emlúps te Secwépemc/Kamloops NAIG bid committee, said he anticipates both Alberta and Saskatchewan will reveal their preferred host bids in the near future.

Rosanne Casimir, the chief of Tk̓’emlúps te Secwépemc, is pleased the first step of securing the B.C. nomination for the Kamloops bid is now complete.

“This means that we will be advancing forward as British Columbia’s host community representative to compete against provinces and territories in western Canada to host the 2027 North American Indigenous Games,” she said.

Casimir realizes there is still a lot of work ahead for local bid officials.

“There is a clear submission process,” she said. “The first part of that process was to compete on a provincial level. We did that. We did that with our partners. We created a solid first bid.”

The next step is to submit a bid to NAIG Council host selection officials. That bid is due March 10 of next year.

After NAIG Council reps have site tours of all that have submitted hosting bids, they are expected to announce next July 22 which bid has been awarded the 2027 NAIG.

If successful, Casimir said the Tk̓’emlúps te Secwépemc/Kamloops bid would be noteworthy.

“This event would be the largest hosted in the history in this area,” she said. “Welcoming up to 6,000 participants from across Turtle Island, across Canada coast-to-coast and to the territories and to the United States.”

Mike O’Reilly, the deputy mayor for the city of Kamloops, is among those hoping to see the local bid chosen.

“This is an exciting first step,” he said. “It’s going to be a very long wait for July 22nd for the announcement and I think we’ll all have that date marked in our calendar.”

O’Reilly said the city has invested more than $60 million into its facilities in recent years in order to be able to host large events such as the NAIG.

“Most importantly is the opportunity to expand our long-lasting relationship with Tk̓’emlúps and other surrounding Indigenous nations and communities we are near,” he said. “And also bringing our communities together in sport and culture celebration and reconciliation.”

Another politician keen to see the 2027 NAIG come to Tk̓’emlúps/Kamloops is Lisa Beare, the minister of tourism, arts, culture and sport.

“It would be an honour to welcome the Games in British Columbia,” Beare said. “And I look forward to the next steps in the selection process.”