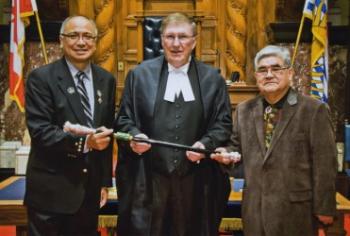 "I could talk about my uncle all day, but he wouldn't. He wasn't one to promote himself." —Charles Heit
By Dianne Meili
First published 2009

Carver Walter Harris' father was a carpenter. So it seemed only natural that the younger Harris would join the elder Harris in his Kispiox woodworking shop.

The straight lines and precision required for cabinet and furniture-making soon gave way, however, to the flowing curves and ovoid shapes prevalent in West Coast carving after Walter became involved in constructing an ancient 'Ksan village replica.

“He really got interested in all the forms and symbolism in the village carvings and that was the thing that led him to art," said Charles Heit, nephew and a fellow carver who learned the form from his late uncle.

"Back in the late sixties and early seventies there were only about 23 carvers. When my uncle enrolled in art school (Kitanmaax School of Northwest Coast Indian Art) he was taught by non-Natives. He always told me I was lucky to have been taught by someone of my own nation."

At the school, Walter learned the rules of design and about the use of color.

"His attention to detail was just amazing," Charles said. "And he pushed the boundaries. When no one else was using blue, he started using it. He had taste in everything he did and his work appealed to a lot of people."

“When he carved, or engraved his metal jewellery, he was meticulous,” she said in a CBC radio interview. "It was deep and it lasted. I know people who've worn his jewellery for 30 years and the designs haven't worn down."

The fact that Walter's work appealed to many is evident in the fact his jewellery, totem poles and panels are in public and private collections around the world. A limestone killer whale graces the entry to the House of Commons and a carved wood panel decorates Canada's Paris embassy. A sawmill company in Japan purchased his work, and a carved totem pole welcomes visitors to the museum of anthropology in Vancouver.

Walter also won several awards, including the Governor General's Award for Excellence in Visual Arts in 2003, and he was appointed an Order of Canada Officer in 2005.

Julie said the memory of her father is alive and well because his artwork seems to be "everywhere I go," but the piece she most treasures is the wedding band her father engraved for her.

"And whenever I smell cedar, I see my father working out in his shop."

The studio he constructed after carving for years in the basement of his home was crafted as painstakingly as his art pieces were, complete with carvings of a running wolf and a killer whale representing his family clans.

Born in 1931 into the Gitxsan Nation of northern B.C., Walter grew up in a time when mainstream society cared little for his people's cultural values and art. He survived residential school and became chief of the Fireweed clan in Kispiox village at the age of 26, receiving his uncle's hereditary chieftain name Geel.

Walter married his wife Sadie in 1956 and the couple had five children. The community was small and close-knit, "and I remember everyone heading off for the trapline in the winter and the whole village would go out fishing," recalled Charles. "My uncle had his own boat and he would follow the fish all down the coast. He did well for himself."

Residents were progressive, and at one time operated their own sawmill under Walter's leadership.

"We had zero unemployment and even the little kids were working. They would take meals to the men working in the sawmill," said Charles. "But then the provincial government put an end to all that.

Leaving the sawmill and fishing industry behind, Walter honed his craft during the 1970s and opened a studio in 1984. He became the senior instructor of wood sculpture at 'Ksan, a post he proudly held from 1972 to 1985.

But a severe stroke suffered in 1987 threatened to end his career abruptly.

"It paralysed his right side and he was right-handed," said Julie. With the encouragement of his family, Walter made himself continue to carve, only to suffer another setback in the form of heart surgery in 1990.

"But he kept on working at it and practising, and he recovered," Julie added, pointing out his work before and after his illness looks the same.

About 1,000 people gathered in Hazleton to honor Walter's life a week after his death on Jan. 12 at the age of 77.

It was an overwhelming day for the family, Julie said. As soon as people heard about the great artist's passing they must have started making plans to attend the funeral, she added, pointing out one man resorted to driving to Hazleton from Prince George after his flight was cancelled.

"My dad was a kind and loving man. He always reached out to people and shared his good spirit. Even after he got his awards, he remained humble and caring," Julie said.

"I could talk about my uncle all day, but he wouldn't. He wasn't one to promote himself," said Charles, adding Walter was generous when it came to sharing his talent and knowledge with others who wanted to perfect their own Northwest Coast designs.

"He could have moved to Vancouver and made millions, but he was a proud Gitxsan leader and he chose to stay home.

"My uncle has been my guide throughout my life. I have tried very hard to follow in his footsteps."