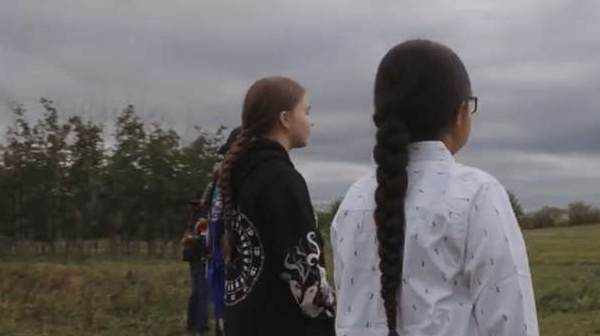 Braves Wear Braids is a new documentary that sheds light on the spiritual meaning and importance of braids in the Indigenous community, and the ongoing struggles faced by young people who carry on this tradition.

Directed and produced by Calgary-based wife-and-husband team Jamie and Bryce Starlight, the 28-minute film shares its name with the non-profit initiative the couple founded in October 2020. Braves Wear Braids was born out of the Starlights’ desire “to support Indigenous youth in the efforts [to] carry on the cultural importance of wearing their hair in braids.”

It is a long-standing practice within many First Nations for males to wear their hair in braids. It is seen as a symbol of their connection to culture and Indigenous roots.

However, in residential schools across Canada during the 19th and 20th centuries, this sacred practise came under attack, with braids chopped off and long hair cut short upon children’s arrival at the institutions.

“They never allowed us to be First Nations people,” said Carolina Hurricanes NHL player and former Edmonton Oiler Ethan Bear. He was interviewed for the Braves Wear Braids film.

“They wanted to cut your hair. They wanted to try [to] scrub the brownness off your skin. They didn’t let you talk your language. So now people don’t want to grow their hair long. It’s just another way to get criticized, discriminated and stereotyped.

“Do you know,” Bear continued, “That’s why a lot of First Nations people go to drugs and alcohol, because some of the pain is so internal that they don’t even know how to heal it.”

Ellery Starlight, a member of the Tsuut’ina Council who also appears in the documentary film, reiterated Bear’s point: “Residential school was the start of the dissemblance of our identity.”

Despite the teasing and bullying experienced by many Indigenous boys and young men who grew their hair long and wore braids, some persisted and embraced their roots, including Bear, who was inspired after seeing his older cousin decide to grow his hair out.

“When I seen him for the first time with his long hair flowing out of his bucket, I was like, ‘That is so sick, I want to look like Bert when I play’,” Bear said in the film. “And I was always afraid to step out of my shell and kind of be myself and just go for it.

“For me, it just felt grounding. You know, I can be more of who I am and within my people, because we’ve always had long hair. It kind of helped me bring out my Native side out of me. And it just felt really good. It felt powerful.”

It is this sort of pride and honour that Jamie and Bryce Starlight want for all young Indigenous males, a way to restore a tradition that was literally cut out of their own families’ past.

“We were really looking for ways to give back to the community,” said Bryce, who has been wearing his own hair long and in braids since he was a young boy.

“We place a lot of value on the culture and those elements that are starting to be lost, such as long hair, and it’s something that I have a personal connection to,” he continued. “So, we really started looking at how to create resources for people to give support to boys with braids.”

Jamie and Bryce are trying to get the film into schools across the Prairies, as a teaching tool and a way to help Indigenous as well as non-Indigenous people understand the history and culture behind boys wearing their hair long and in braids.

“A lot of the stories we were hearing had to do with bullying in the schools,” Jamie added. “It was a really important place to kind of focus on with this.”

The filmmakers have already submitted the documentary to Calgary and Palliser’s school districts, and they’ve been in contact with the Alberta Teachers’ Association, though their ultimate goal is to have the film reach as many people as possible.

“We’re looking at getting it into the hands of teachers and educators,” Bryce continued. “We do see this as a tool for youth to be able to use, and for teachers to use in interacting with students…. We want this really to go national and get people’s attention on it.

“It’s at least a tool in the toolbox for people to use when they’re working with Indigenous students, whether they’re boys or girls, in educating them on how important this is.”

The Braves Wear Braids documentary can be viewed here: https://youtu.be/U4B_hUs8A4E