Give freely of yourself and bring light to the world 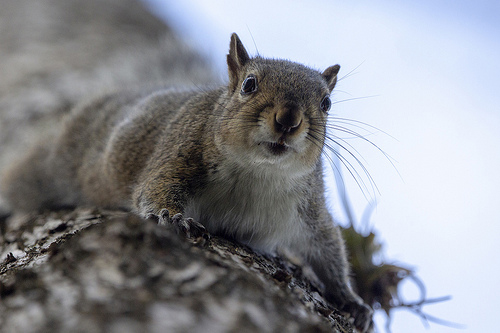 Because of this knowledge, the animal people knew humility and so gave to each other openly and freely.

One day as he was getting ready to climb into his home in the sky, Father Sun became entangled in the branches of a tall pine tree.

He tried and he tried to get free. He wiggled and he tugged, but he only managed to get himself more and more tangled up in the arms of the tree.

All that morning the animal people awaited the arrival of the life-giver. After a long wait they climbed back into their beds. Mukwa the bear crawled into his cave.

The little rabbit Wapoose snuggled back down into a thick bush and Ajidimo the squirrel ran back into his home in the trunk of a tree. Only the creatures of the night were happy.

The next day Father Sun still did not appear. The animal people grew worried. A great search was called and everyone hunted high and low throughout the forest but could find no trace of Father Sun.

Only Ajidimo the squirrel kept up the search. He remembered all that Father Sun had provided for him throughout his life and his gratitude kept him going.

All over the forest, the squirrel searched. He grew tired. Finally, near exhaustion, he found Father Sun completely entangled in the branches of the pine tree.

Father Sun was weak from struggling and his light was growing dimmer and dimmer. He told the little squirrel to come up and give a big push and perhaps he might break free. If he did not get free soon, Father Sun was worried that his light might go out forever.

Father Sun asked the squirrel to try again. The squirrel remembered that this was the great life-giver and without his light he and his animal brothers and sisters would perish. He gathered his energy and scurried up the tree.

The heat was incredible. Still, the little brave squirrel ran into the top branches and gave Father Sun a great push. The light blinded him. Still he pushed. Father Sun began to move away. Harder and harder, the squirrel pushed. Further and further away moved Father Sun but still not far enough to break free.

The tiny squirrel pushed and stretched as far as his tiny arms could go. He felt his skin stretch wide. It hurt. Finally, though, Father Sun snapped free and began a slow climb into the heavens. Light returned to the world of the animal people.

As he climbed higher and higher into his home in the sky, Father Sun felt sorry for the poor squirrel. He was completely blind now and his overstretched skin hurt very badly.

The life-giver knew the squirrel very well. He'd watched him grow up and knew of all his hopes and dreams. He knew that the squirrel had always dreamed of being able to fly like the great eagle. Father Sun knew what to do.

He told the squirrel that because of his selfless act of bravery he would reward him. From now on, he said, you will be able to fly as you have always dreamed. Just then the overstretched skin of the squirrel became a pair of wings.

Father Sun could not return the eyesight of the squirrel but he told him that he would give him a great pair of ears that would catch echoes and vibrations from objects as he flew by them and he would know when to dip and turn.

Light would always hurt the eyes of a squirrel so Father Sun told him that he would have to only fly at night. During the day he would sleep and rest. And this is how the creatures we know as bats came to be.

For countless generations our people have told each other stories and legends during the long cold winter nights. There was more time to spend contemplating the meaning of every story. Every person took what meaning he could from these stories and grew wiser in the ways of his people.

For me, this little story from my Ojibway people tells me a great deal. It tells me that when I give freely of myself to another, I become more.

When I become humble enough to sacrifice of myself, I make it possible for my dreams to become true. It tells me courage, humility, sharing and kindness will always bring light to my world.